On the Use of the Honor System in Confining Chickens

I hinted at this in a previous post. Our Not-Buff-Orpingtons only stay in their pen out of politeness, not because they believe they are in any way required to do so.
I took these pictures at dusk tonight.

In this first one, you can see two blue-tarped structures. The one on the left (rounded at the top) is the Not-Buffs' shelter, the one on the right is the tarp that tents the rabbits' cages. (In fact, you can see Stiffler at the bottom center of the photo. We'll be moving the rabbit cages into the hoophouse for the winter sometime this week.)
Five chickens are perched on the bar over the gate to the main flock's pen (right side of picture), two are perched on top of their own house (left side of picture), and one is on top of the rabbits' tent. What you can't see in this picture is the other three little hens perched on the top of the gate to their own yard. 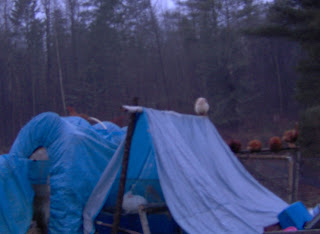 Here's a closer look at the gate sitters and the rabbit shelter sitter. 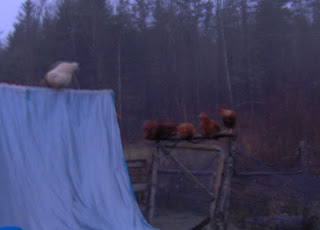 Eleven chickens, with only 1.5 in the pen. (Well, three halves, anyway.) 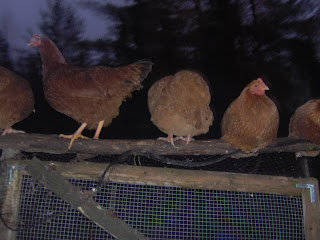 Like I said - the fact that they're inside their pen in the daytime is probably coincidental.
Posted by gayle at 5:47 PM

Isnt' it cold up there? Why are they out in the open? (Answer: Chickens are stupid.)

(subtle? My word verification is 'subtle'? Is that supposed to tell me something?)

Are there no coyotes in the Northeast Kingdom? or wolverines or foxes or mink or weasels or skunks? or loose dogs? Methinks the not-Buffs are risking their [dim-witted] lives. Or maybe it is a lot wilder here in WI...