This is for Norma 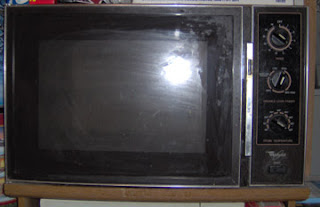 My microwave may be even more ancient than hers... and still used on a daily basis.
It was a long-used hand-me-down from Madman's parents when they upgraded many years ago. He had it for years before we got together - and that was 11 years ago. The timer quit working last year, but since it is still zapping like a trouper, we just time things manually by watching the kitchen clock.
Two knobs, and a button. No keypad, no turntable.
They just don't make them like that anymore...

sockssockssocks
Originally uploaded by mangofeet
This is an experiment - blogging direct from flickr.

This is the post I was going to make before I got so wildly distracted by comments.

I went to the library a short while ago, and when I went to check out my stack of books, the librarian told me that they had just gotten in a couple of new knitting books. Knowing I am always on the lookout for knitting material (they've hunted up many a title for me through inter-library loan), they'd held them aside for me.
Bless their hearts. Ann Budd's "Getting Started Knitting Socks" and Interweave's "Favorite Socks"
Woohoo!
As you can see from the picture, I may have gotten a little excited... I've already finished two pair (and worn the purple ones), though I doubt I'll finish the other sock. I'm an extremely loose knitter, so much so that I usually have to go down a needle size or two to get gauge, and since that sock is already being knit on size 0 and is huge and I don't own any 00 needles, well... Maybe I will finish it, and put it into service as a Christmas stocking.
Purple and green are Christmas colors, right?
Posted by gayle at 2:49 PM No comments:

I got comments!
Holy crap! This is Exciting! and Scary! and Wonderful! and Scary!

I signed in today to post, and was absolutely flabberghasted to see that I had comments. Actual people had read my blog. I got so excited that I jumped up and paced from one end of the house to the other. Then I did it again. I came back to the computer and checked to make sure I hadn't imagined it. Still there. I paced some more. I went and woke up the cat to tell her. She just gave me her patented "So?" look and went back to sleep. I put on my boots and coat and hat and gloves and scarf and went out and told the chickens.

Some of them were excited for me:

I'm still so hyper I can barely breath. Or sit still long enough to type...

I'm by nature a very shy person. My goal in starting the blog was to try to overcome that (even a little) and to connect with people who share my interests. I'm still getting the hang of this posting thing, and didn't really expect to be read so soon. (I haven't even told my mother...)
I was talking to my oldest daughter on the phone the other day. She lives in Florida (she grew up in Vermont, but left for warmer climes long ago) and we were comparing notes about our respective weathers. I was griping about snow and mentioned in passing that I had started a blog, and had just put up a post titled "Winter Wonderland, my ass." She just laughed - didn't ask me for a link. I know she knows that I'll send her the link when I'm ready.

She also told me that any time I want to 'escape,' I'm welcome to come down and spend a month with them.
Me: If I had anyone to take care of the chickens, I'd be in my car and on my way. I'll have to bring the chickens with me. A 20-hr drive with a carload of chickens - how bad could that be?
Her: Um. I don't think we're allowed to have chickens in our neighborhood.
Me: They'd just be visiting. Not actually living there. If anyone gives you a hard time, you just put on a weary expression and say "It's my mother, what can I do?" A little eye-rolling would be good, too.
Her: Well, um. Maybe.

And for the record? We've had another foot of snow since my last post.
Posted by gayle at 1:35 PM 2 comments:

The view out to the chicken coop - it's in the lean-to just to right of center. That little gray blotch in the center of the snow? That's the very top of our big galvanized garbage can.

That dark slash? That's the top of the door to the root cellar. I'm glad we didn't put much in there last fall.

And this is the view down my driveway. Or what would be my driveway if we could only drive on it. I've been trudging/shoveling paths since December, when it became impossible to drive up it anymore. You can just make out the path in the center of the picture. It disappears around and down the hill. What you see in the background is the other side of the valley.

In the best of conditions, our driveway is a bitch. It's long, it's steep, and it curves. Add to this the fact that we haven't been able to hang onto a SnowplowGuy for more than one season (and in Vermont, a good SnowplowGuy is more important that a good doctor.) The one we had last year hasn't returned any of our calls. A friend of ours ran into a guy who used to plow for us several years ago (we'd heard that he moved away, but hadn't heard he'd moved back to the area) who showed up once and promptly blew his alternator about a third of the way up the driveway. Though he said he'd be back (after fixing his truck), we haven't seen him since.
By sheer stubbornness, I'd been working my car up a little further each time I drove in (Bless Subaru!), though I'd had to give up that practice when I managed to run aground and had to call my brother-in-law to drag me off the plateau of crusted snow the car was balanced on. (All wheel drive only works when most of the tires are actually in contact with the ground... who knew?)
So, Monday, I needed to run errands, and it was snowing again. Not a surprise. In backing down the driveway, I got hung up in snow 4 times, each time having to dig out packed snow from behind and underneath the car. The snow was so slippery, and the frozen ruts so choppy, that I was lucky to get out at all. It took almost two hours from the time I stepped out my door, until I actually got the car to the end of the driveway. When I got home, I only pulled in a short distance so I wouldn't have to go through that aggravation the next time.
Tuesday. More snow. Not a surprise. After Monday's debacle, I just couldn't face going out again, and put things off until Wednesday, when I had to go out again anyway.
So Wednesday. Winter storm warnings in effect when I got up. The snow was coming down so hard that I couldn't even see across the valley. I watched all morning, then saw it was letting up a little around noon, so I bundled up, did what shoveling I could, and waded through snow down to the car.
Turning the key just got me a little ticking noise instead of that nice 'vroom vroom' sound.