It's hard to take pictures of a black lamb. 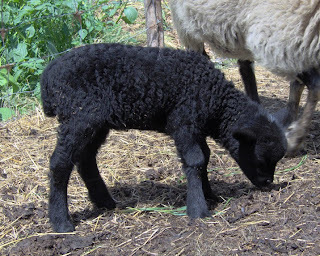 It's especially hard to take pictures of a black lamb when the Two Friendliest Sheep in the Entire World are trying to help.
All these pictures were taken while
A. Merlin was trying to crawl into my lap. (Because we all know what a lapsheep he is.)
B. Onyx was alternating between looking over my shoulder and giving me sudden attention-getting nudges. (I got a lot of pictures of sky and dirt from being knocked off balance.)

But, anyway.
Here he is, the little cutie - 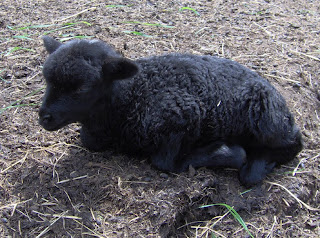 And I finally got a shot of the little white spot he has on the top of his head. 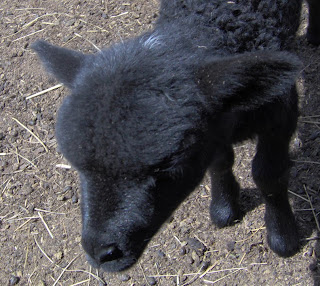 And his favorite activity of all: 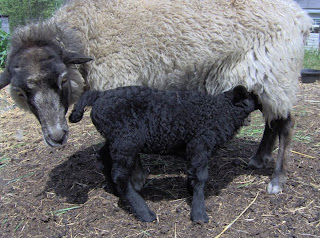 Picture that little tail flipping at about 900 rpm. It's a wonder he doesn't leave the ground - a little butt-powered helicopter...
Posted by gayle at 1:31 PM 12 comments:

The perfect name for Lambie

Our granddaughter came up with it - Coal. Now we're just dithering on the actual spelling.

Coal?
Cole? (Madman thinks this is more a proper sort of name than coal.)
Kohl? (This one was my idea, since he's resisting coal.)

All Goldie, all the time

In spinning news, I've been working on Goldie's fleece. For my Tour de Fleece project, I planned to spin the 2 lbs of fiber that I had washed and carded.
Fail. Epic fail, as a matter of fact. I finally got a 3rd bobbin spun the day the Tour ended, and started plying the day after. 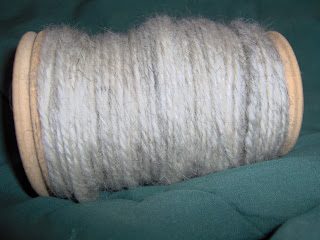 And since it's not really all Goldie all the time, here's some purple beans I picked this morning. 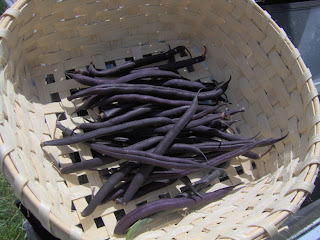 They're really really pretty. But I hear that they turn green when cooked. What's the point of that?
Posted by gayle at 9:28 PM 3 comments:

It was hard to get a good picture. Goldie is still a bit skittish around people, and I didn't want to upset her by getting too close. So I stayed outside the fence, stalking around with my camera and moving slowly.
Problem one was trying to take a picture of a black lamb who's lying in the shade. 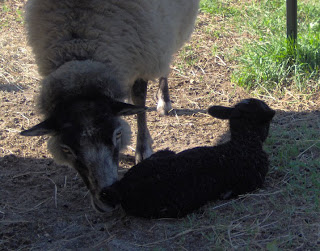 Then, there was Uncle Merlin, who loves it when the paparazzi appear. Cameras were made for Merlin.
Wait patiently, line up the shot, and... 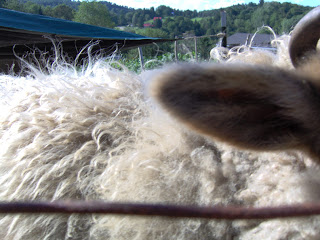 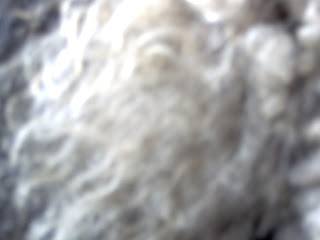 But patience finally pays off. Merlin went over to see if anything new had appeared in the food dish since the last time he'd looked, little Lambie came out of the shade, and voila! 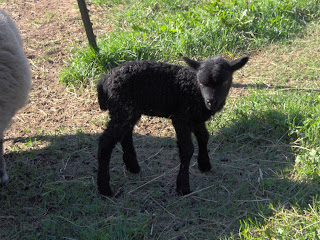 He's at the cute wobbly stage. All legs and no coordination.
Though he's getting pretty good at that eating thing. 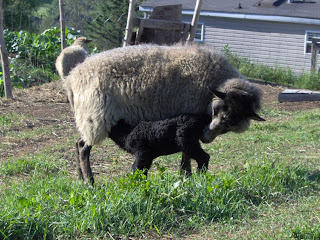 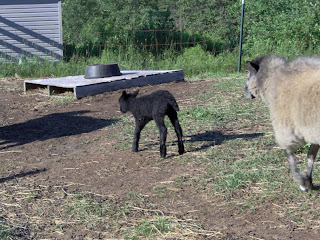 Snacktime over, he set off to explore, with Mama trailing close behind. 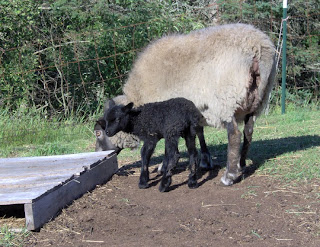 He was very puzzled by this pallet. (Later on, while we were watching him through the window, he finally managed to jump up on it. The concept of "slippery" came as a big surprise.)

No name yet. Anything cute enough to fit him now would sound awfully undignified when he's a ram...
Posted by gayle at 8:13 PM 7 comments:

Merlin was the noisy sheep this morning, instead of Goldie. Madman and I joked that maybe he was letting her sleep in.

Then we looked out the window.

And ran for the door.

And then ran back to throw some non-jammies on, and ran for the door again, hooking the camera on the way by. 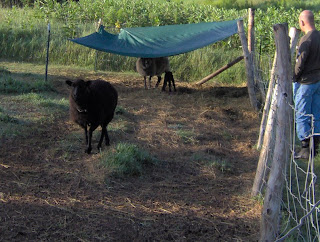 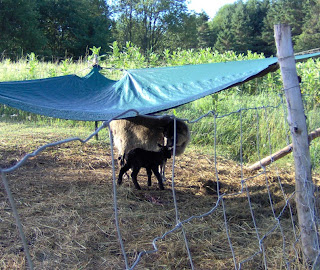 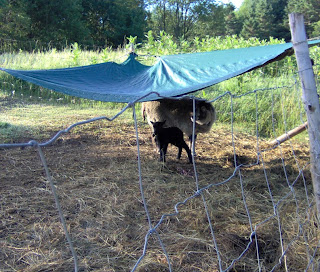 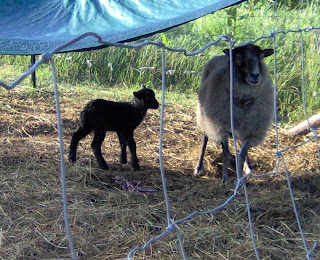 The suspense is nearing fatal levels...

Yesterday was my day off, so I spent a goodly part of it watching Goldie. She was quiet. Normally she devotes a lot of time to complaining about the portion sizes around here and grumbling about Onyx and Merlin hogging the really good stuff. So quiet is not the norm for her. When I took them supper, she didn't even headbutt Onyx out of the way.
Weird. Very weird.
We were more-than-half-expecting to see a lamb up on the hill this morning when we got up.
But no. Just Onyx and Merlin, and a very fat Goldie who was complaining to the staff that breakfast was late and how inexcusable that behavior is, since, after all, the sun had been up for hours and hours and hours. (Which in human time is about 10 minutes.)
No lamb yet.
Come ON! We're waiting!
Posted by gayle at 6:45 PM 1 comment:

As many times as I count sheep over the course of a day, it's a wonder I can stay awake at all.

No lambikins yet, and an epic fail at a Venn Diagram

Still watching Miss Goldie. Udder slowly filling, but no other signs, yet. According to the experts, when the time is close, she'll start wanting to be by herself, pawing the ground in a nest-building effort, and probably lose her appetite. (Madman remains to be convinced on that last one, since she has always spent most of her day trying to convince the world that no one EVER feeds her...)

As for the Venn Diagram, I explored the googles looking for a way to make one, but didn't have much luck. Nothing quite worked. Apparently there are all kinds of ways to make one using Word and Excel (neither of which I have, anyway) which aren't really useful for this format, and the online ones let me print, but not save to the blog.

So, like everything else in my life, I'm just going to wing it.


Here's the deal. If you belong to the subset consisting of the intersection of the following sets, you're going to have to close this post immediately. Do not pass Go, do not collect $200, do not peek.

A. You live in Florida.
B. You are directly related to me by birth or marriage.
C. Your last name starts with the letter "C".
D. You want to be surprised when a 3-yr-old opens his birthday present.

Feel free to draw your own Venn Diagram.

For the rest of the Universe, who are not included in that subset, check out what I made: 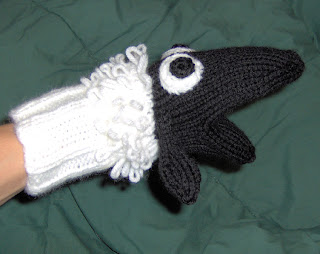 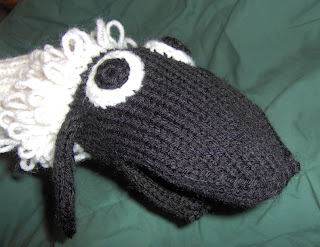 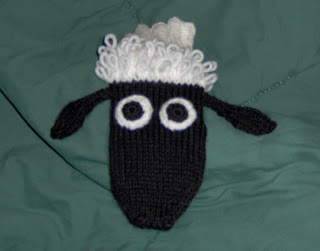 Yeah, we're big fans of Wallace and Gromit. And Shaun the Sheep, of course...

By the way, it's very difficult to take a picture of your own hand while wearing a hand puppet.

As a matter of fact, it's very difficult to take a picture of anything while wearing a hand puppet.
Posted by gayle at 9:59 PM 10 comments:

As I was feeding the sheep tonight, I paid extra attention to Goldie. Not only is she getting bigger and lumpier, her udder is starting to fill. Lambing is imminent.
We'd figured late July or early August as a rough estimate, but with these signs, I did a little extra math. If she and the boyfriend got right down to business, the earliest possible due date is July 22nd. And considering the fact that sheep hate to be predictable, this means that she could lamb any day now.
Stay tuned...
Posted by gayle at 6:39 PM 10 comments:

Is there finally spinning going on? 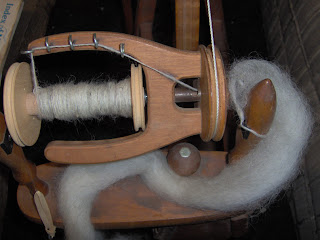 Tour de Fleece started over a week ago. I started today.
Do you think I can catch up? How many hundreds of kilometers can I possibly be behind... 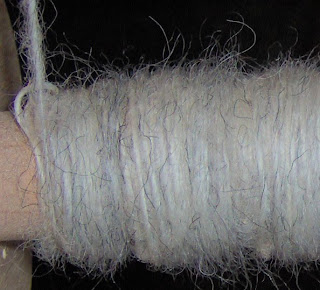 Let's see if this works

Saw this on another blog this morning, and it's too good not to share...

The other night Madman nudged me awake.
"Psst, sweetie? You're snoring," he said.
"Wha?" I muzzily answered. I listened for a moment. "I don't hear anything..."
"Just roll over on your side and go back to sleep, please."
So I did.
Now we all know I am a delicate flower and couldn't possibly snore.
Frankly, I think he's imagining things.
Posted by gayle at 9:04 PM 4 comments: