And more knitting, since it's too cold to do anything else...

I've got three finishes for 2015 already!

Dad has an old pair of leather mittens. 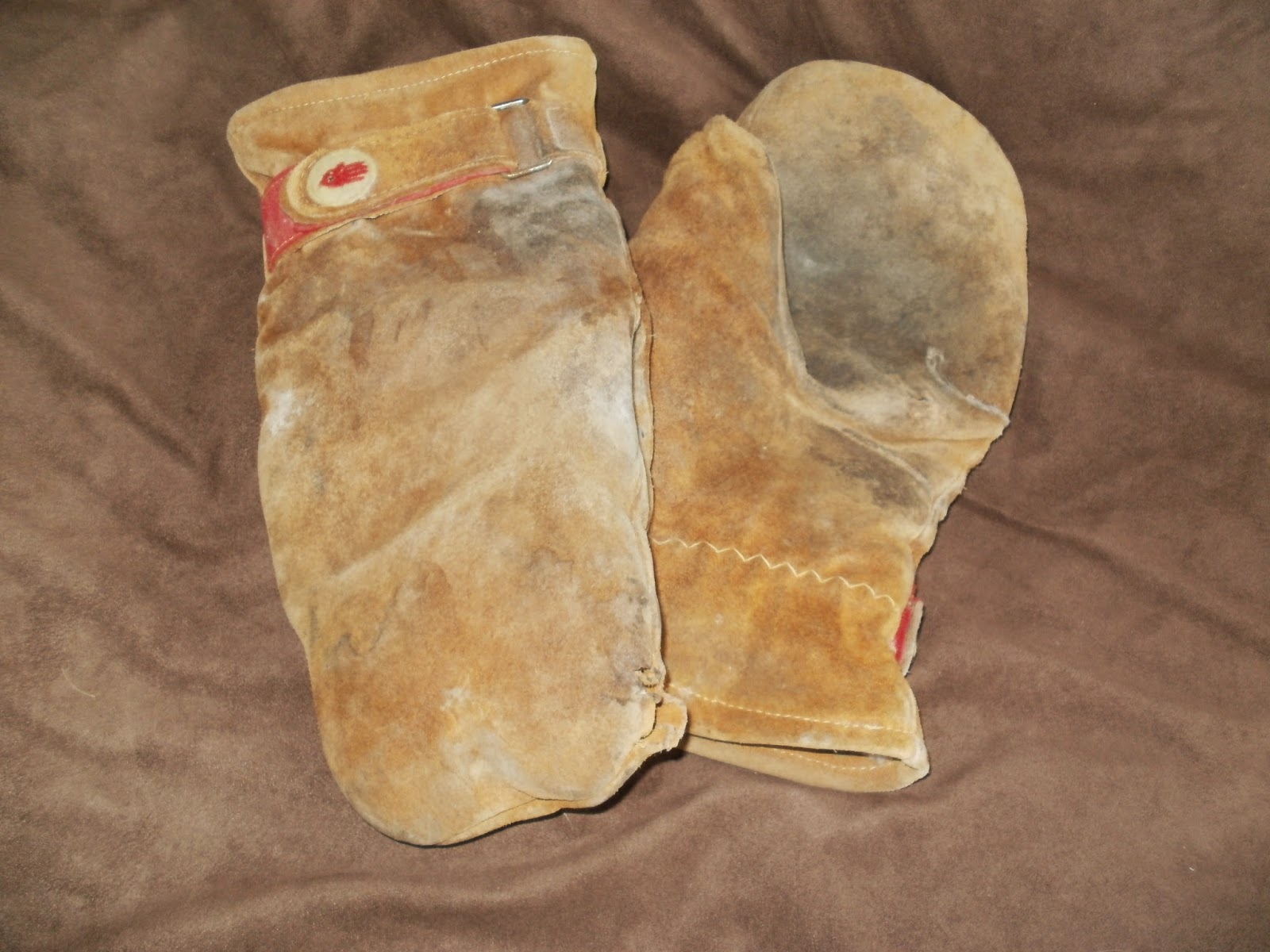 Clearly he's had them for a while. The pair of wool mittens that line them have become too worn to serve their function.  RIP old wool mittens.  (I didn't get a picture of them.  Your first thought on seeing them would have been "Oh, the poor little things...")
He requested new mittens.  With temperatures hovering in the single digits, with occasional dips into the negative, leather mitts lined with wool mitts are extremely useful at chore time. 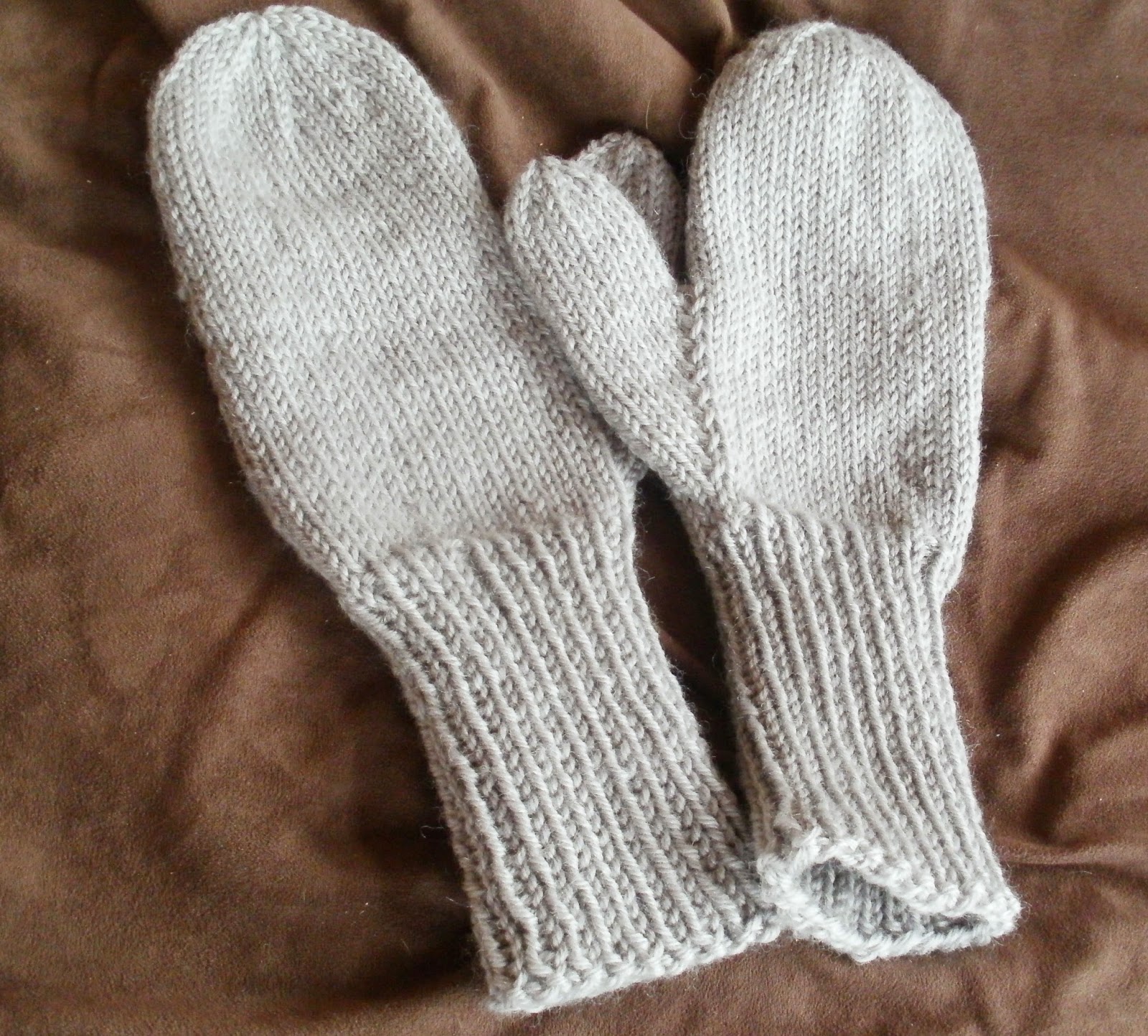 Finish number three is a nice warm cowl for Wicked Good Stepmother, made from yarn spun from alpaca fleeces from her own alpacas. 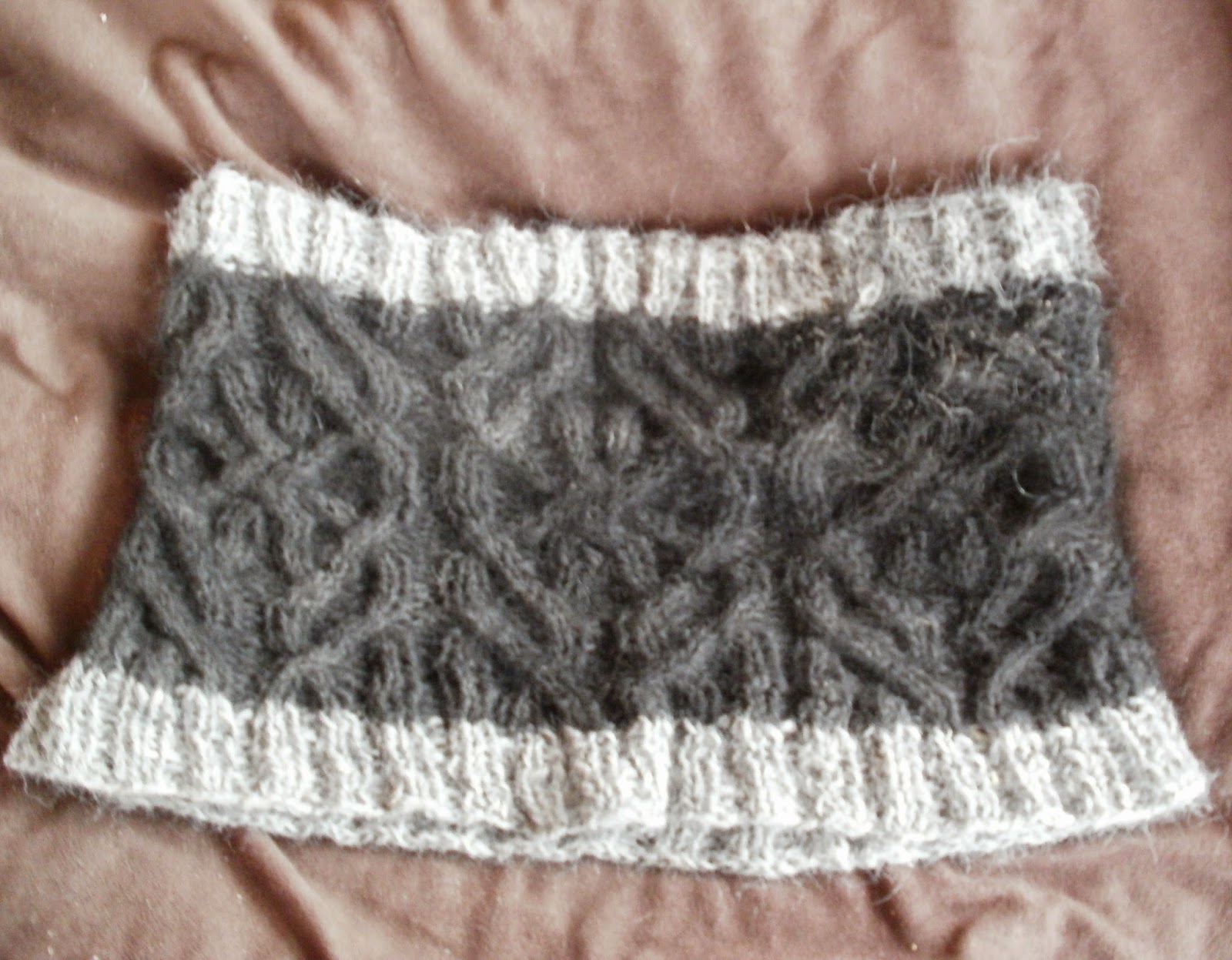 Though full disclosure here - this is a total cheat.  I'd actually started this project last year, using yarn I'd had left from a scarf I knit her a couple of years ago.   It started out to be a Frost hat, in black, because I'm crazy and knit cables with black yarn.  More than once.  I was afraid I didn't have enough of the black yarn to knit the whole thing, so I'd cast on with the gray and knit the ribbed band, trying to stretch the black.  Turned out I had even less yarn that I'd thought, so I'd put the 'hat' in timeout while I considered options.  For a year.  I came across it recently, along with what was left of the gray alpaca yarn, and a light bulb went off.  So, I turned the hat into a cowl by knitting gray ribbing to match the cast on edge, and casting off.  Ta da!  WGS has enjoyed the warmth (alpaca!) in the aforementioned cold temps.

So, with three finishes under my belt, I figured I was entitled to cast on something new.  (We'll ignore the UFOs in various bags here and there.  (And there, too.)  I'm working from stash, so it's all good.)  I recalled that I had some pretty green yarn that WGS had given me a while back.  I was pretty sure there were two skeins, which might be enough for a hat and/or maybe some fingerless mitts.  (Vancouver Fog has been nibbling on the edge of my brain for a while, thanks to kmkat.)  When I went and hunted it up, I was pleasantly surprised to find I actually had four skeins!  Woohoo! 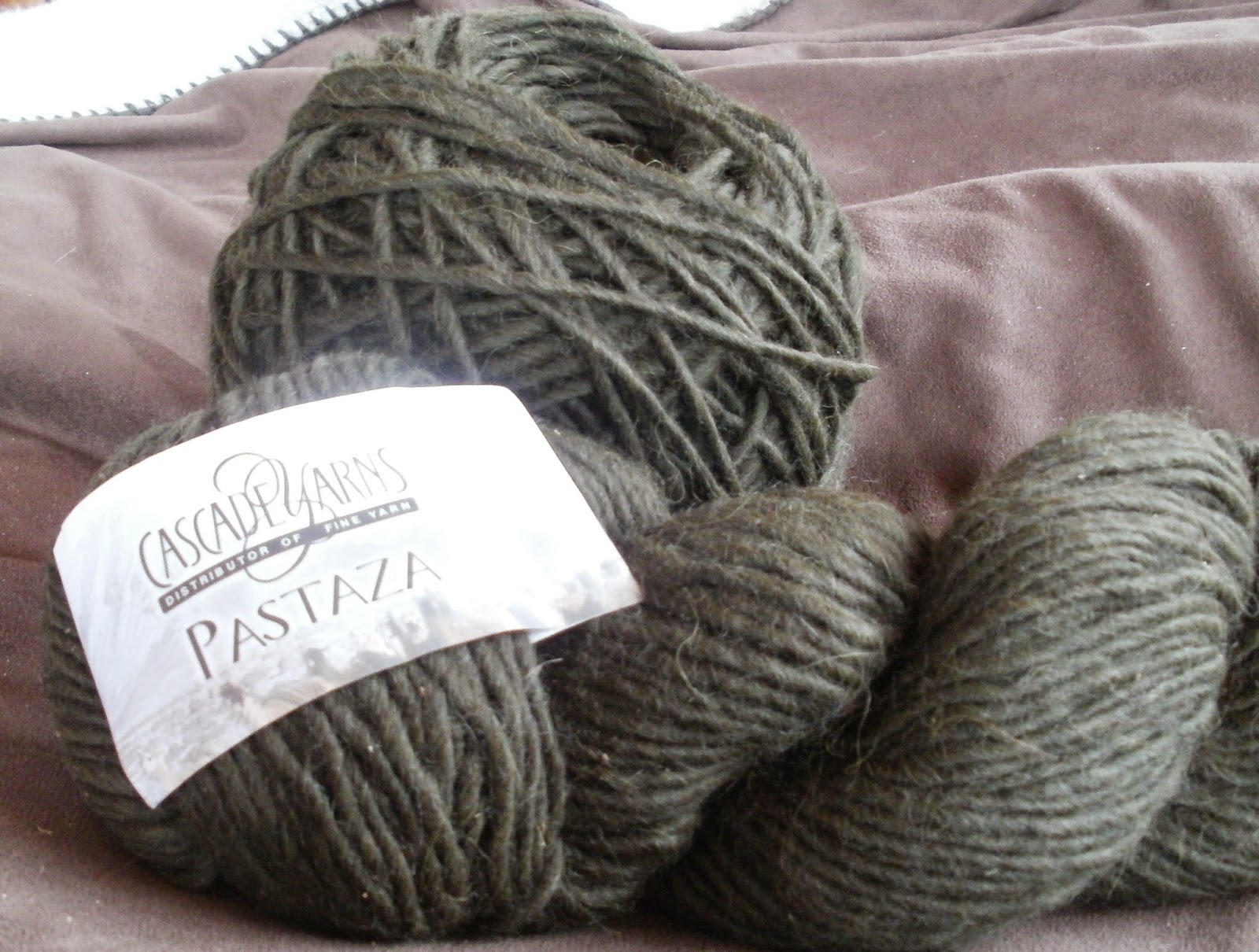 I totaled up yardage and realized I could really expand my expectations.
What to knit, what to knit?  I thought I might have enough for a vest.  Ravelry to the rescue!  I started pattern-hunting, trying out various criteria.  Yardage.  Yarn weight.  It occured to me that top-down might be a good plan, since the yardage I had was right on the borderline of the smallest sizes of what I was finding.
Yep, Ravelry comes through:  Bramblewood.  There are even cables! 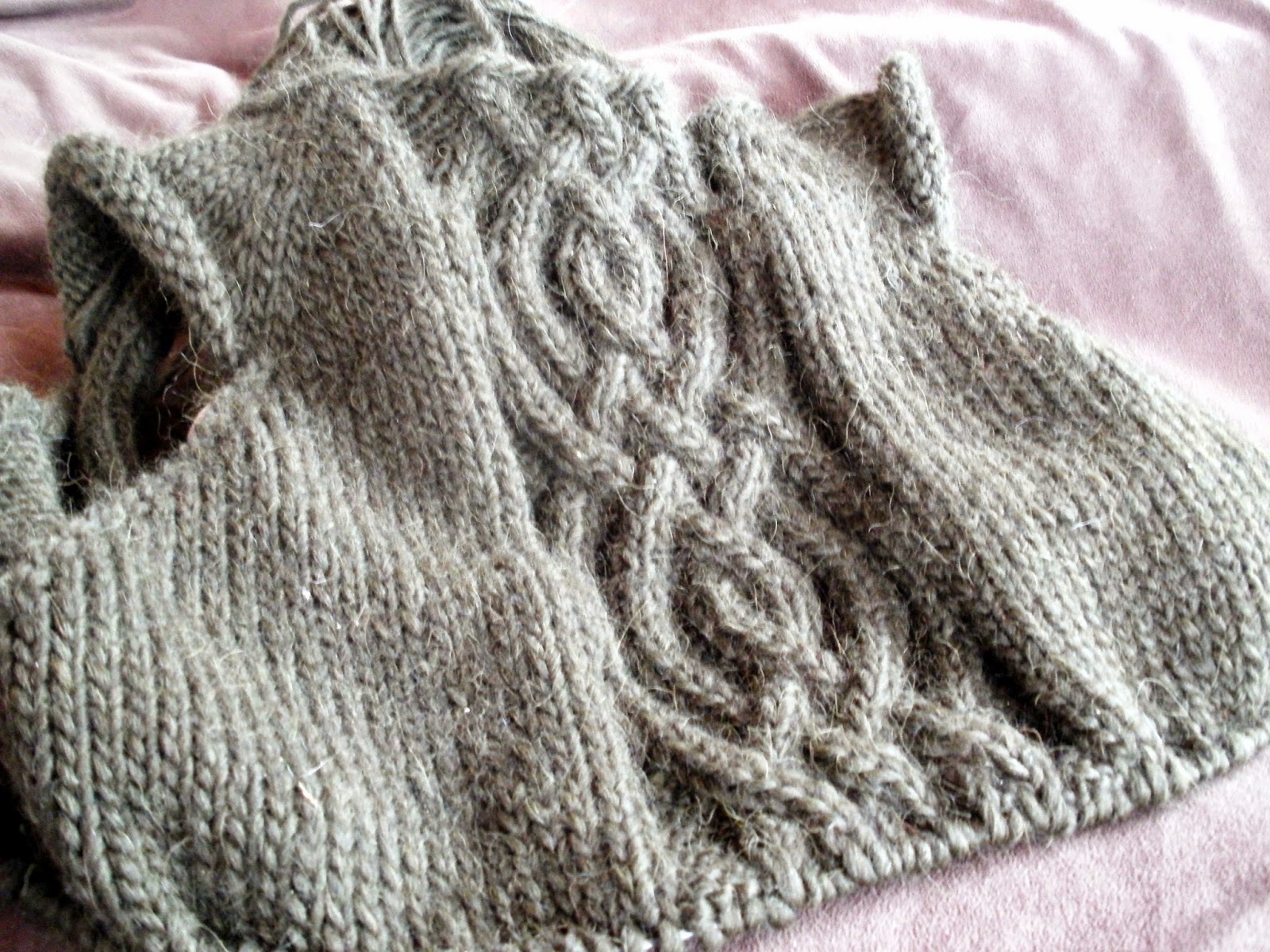 (Someone stole all the color out of my picture.  It's really a deep forest green.)


Do you think I might be a process person?