A little loopy from the meds, but happily on the road to recovery. He'll have to spend the next couple of days planted on the couch, leg elevated, with ice galore.
Seventeen days to the start of deer season, thirty-two days to the end...
Posted by gayle at 9:47 PM 6 comments:

Madman's going into the shop for repairs...

It's the Big Day. Madman had his pre-op stuff yesterday, and the surgery is this afternoon. He's sooooo looking forward to getting this process rolling.
Let the healing begin!
Posted by gayle at 9:48 AM 8 comments:

He had his MRI last week, and saw the orthopedist today. Surgery next week, 2 weeks recuperation , 6 weeks physical therapy.
He's been doing the math - looks like he'll be sufficiently recovered in time to hit the woods with his rifle for at least part of deer season.
The man has priorities, after all...
Posted by gayle at 6:11 PM 5 comments:

Of Sheep and Chickens and Blown-Out Knees

I figured it was about time I put up some pics of the animals, so I headed out outside armed with my camera. I briefly thought about trying to get some photos of the rabbits, but they look exactly the same as the last time I photographed them. Though maybe a little fatter. Anyway, if you're interested, just click on 'rabbits' over in the sidebar. (Though the first thing that will come up is the sad story of Hopper. Just warning you.)

The sheep are another story. They loooooove to have their picture taken. So much so, that they crowd forward to be first. 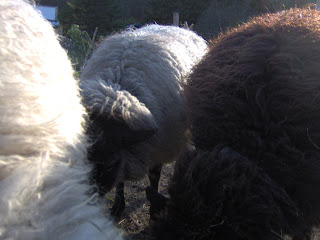 I managed a quick shot of Onyx by distracting them with some tossed in blades of grass. 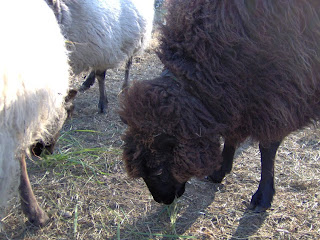 I had to give up on capturing a pic of Merlin - he insisted on pressing his nose up against the lens in every picture. You can't take a picture with a sheep nose pressed on the lens. Truly.

Goldie used to be easier to photograph, back when she thought we were the Spawn of Hell and refused to get near us. But in the last couple of weeks, she's suddenly gotten friendly. After a year and a half, she finally trusts us not to eat her if she gets within reach.

Now she does this. 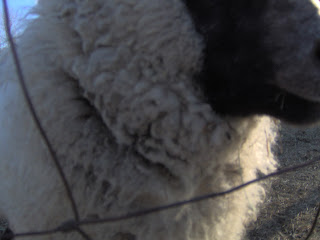 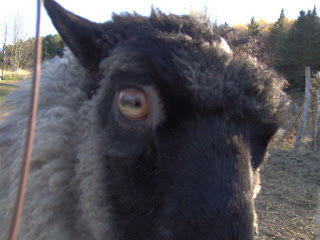 She'll actually come up to us now and let us scritch her. In fact, she insists that we scritch her. We're flabberghasted and delighted.


On to the chickens.
These are some of the hens that we got as chicks last spring. The ones that were supposed to be Buff Orpingtons, but clearly are not. 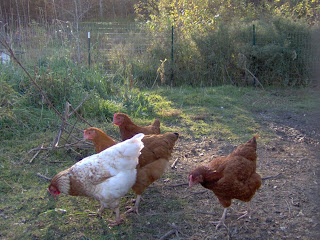 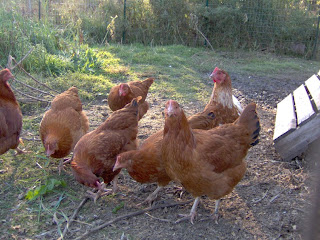 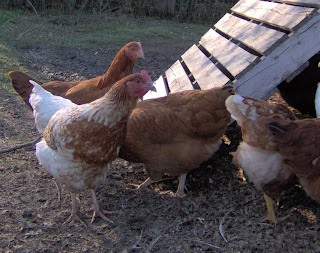 Mutts. That's what they are. Guess who we'll never be buying chickens from ever ever again?


And the blown-out knee? That would be Madman. Torn meniscus. Pain. Crutches. Inactivity. I think it's the inactivity that's bugging him the most. Not a guy who likes to just sit around, my Madman.
MRI and surgery coming up.
Recuperation.
Poor Madman.
Posted by gayle at 7:52 PM 10 comments:

Why does it seem like I work harder on my days off than I do at work? (And I work really really hard at work...)

I had to make a quick trip across the border to NH this morning. Shopping opportunities are limited up in our corner of the state, but goodies abound on the other side of the river. I'd no sooner crossed state lines when I saw blue lights flashing ahead - a cruiser and a big silver minivan were pulled over at the side of the road. I changed lanes to give them plenty of room, thinking the trooper had caught himself a speeder, when I saw a very large deer - a doe - lying dead at the edge of the road. The minivan had a serious punched-in look on its front bumper.
It's bow season for deer in Vermont - apparently NH has a minivan season.

(And remember this from last year? Yeah. Hunting season + Madman = that smell in the dryer area...)

We're madly putting the garden to bed (when Madman isn't sneaking through the woods with his bow) since they're predicting hard frosts for the next several nights. We've had a few light frosts that finished off the fragiles like beans and squash vines. Today he grabbed all the tomatoes and peppers out of the hoophouse, since it's going to be too cold for even that to offer protection. At the moment, every flat surface in the house is covered in tomatoes in all stages of ripeness.
Anyone got any good recipes for green tomatoes?
Posted by gayle at 3:55 PM 8 comments:

It's really hard to come up with something to post about lately. Same old, same old, every day, it seems.

Still spinning Goldie's fleece. Still...
Wrapping up garden stuff.
Work is work, and evermore shall be so.

I'd take pictures of the foliage, but last week's rain pounded all the leaves into the mud.
Posted by gayle at 10:16 PM 5 comments:

I wimped out and stayed home. I've been suffering with the current version of the Killer Cold that's going around up here, and the prospect of a long drive, with detours, in an unfamiliar area, just couldn't compete with the idea of lying on the couch wrapped in a quilt, knitting and whining.
There's always next year...
Posted by gayle at 10:53 AM 5 comments:

(I'm thinking of adopting 'Holy Crap' as my middle name, BTW. Seems like life is always sneaking up and surprising me...)

This time, the Holy Crap is for Vermont Sheep and Wool, which I thought was next weekend. It's this weekend.
Which means I have to go tomorrow, or I won't get to go at all.
Use it or lose it, so to speak.
A goodly portion of Vermont is currently flooded and impassible.
What the hell. As long as it's not raining crocodiles and elephants when I get up in the morning, I'll be headed out, Google map in hand.
Hopefully Google won't try to route me through Ohio this time...
Posted by gayle at 8:30 PM 3 comments: