There's a reason I'm not allowed to use superglue...

So, I suddenly had a computer problem.  Basically, it wouldn't go.  Or rather, it would start to go, then stop.  As in a big fat 'Nope, not doing this anymore.'  A whole week of giant paperweight.
I shanghaied my brother to have a look.  (I'm software, not hardware.  If unplugging it and plugging it back in doesn't work, I'm lost.  My brother builds his own systems.  For fun.  He was just asking for it.)
He poked around in the guts for a moment or two and discovered that the main fan was loose.  He held it in place while I hit the on switch, and the thing powered up normally for the first time in days.
"So, it works while you're holding it in place!"  I said.
"You can't afford me."
Well, darn.
He got it balanced precariously in place, and it kept running, but we both knew that was temporary at best.  Apparently it was mostly held in place by the suction created by the thermal paste.   After a little more poking around, he found the broken bit of the bracket it's supposed to lock on to and suggested I glue it back on.
"Yep,"  I said.  "When it stops working again, I'll do that.  For now, I'm going with the 'if it works, don't fix it' clause."
And it ran long enough for me to get some emails sent and check on a few things, then shut itself off again.
All righty, then.
I had the tube of superglue ready, knowing this moment would come.  (Those of you who know me are already laughing.)  The piece that I had to glue back on to the bracket was about the size of my little fingernail.  I held it delicately between thumb and index finger, applied a tiny drop of superglue, then pushed the little bitsy bit into place.  I waited a few seconds for the glue to bond, then let go and pulled back my hand.
Or rather, I tried to let go.  The bitsy bit was stuck to my fingers.  I finally got my hand back, but the bit was still stuck between my finger and thumb.  Apparently the bond to my skin was stronger that the bond to its rightful place in the world.  So I grabbed it with the thumb and index finger of my left hand and tried to pry it loose.
You saw this one coming, didn't you?  Yeah, now I had both thumbs and both index fingers stuck to a piece of plastic the size of my little fingernail.
So, I didn't really need all of that skin I was wasting on my fingertips.  Purely superfluous.  Completely unnecessary.  And it'll grow back.  At least, it did the last time I used superglue.  And the time before.
Once I got all my fingers back, I held the bitsy bit tweezed in a pair of needlenose pliers while I applied the glue and poked it back where it belonged.
Here's a photo of the innards, after I got the bit glued back.  (And recovered my fingers.)  See the orange frame between the upside-down 'gigabyte' blue thing and the top of the picture?  That little tiny tab at the bottom center of the frame (dead center of the picture) is the bit I had to put back.  It sticks down from the base of the frame and the fan has a metal bit that locks onto it. 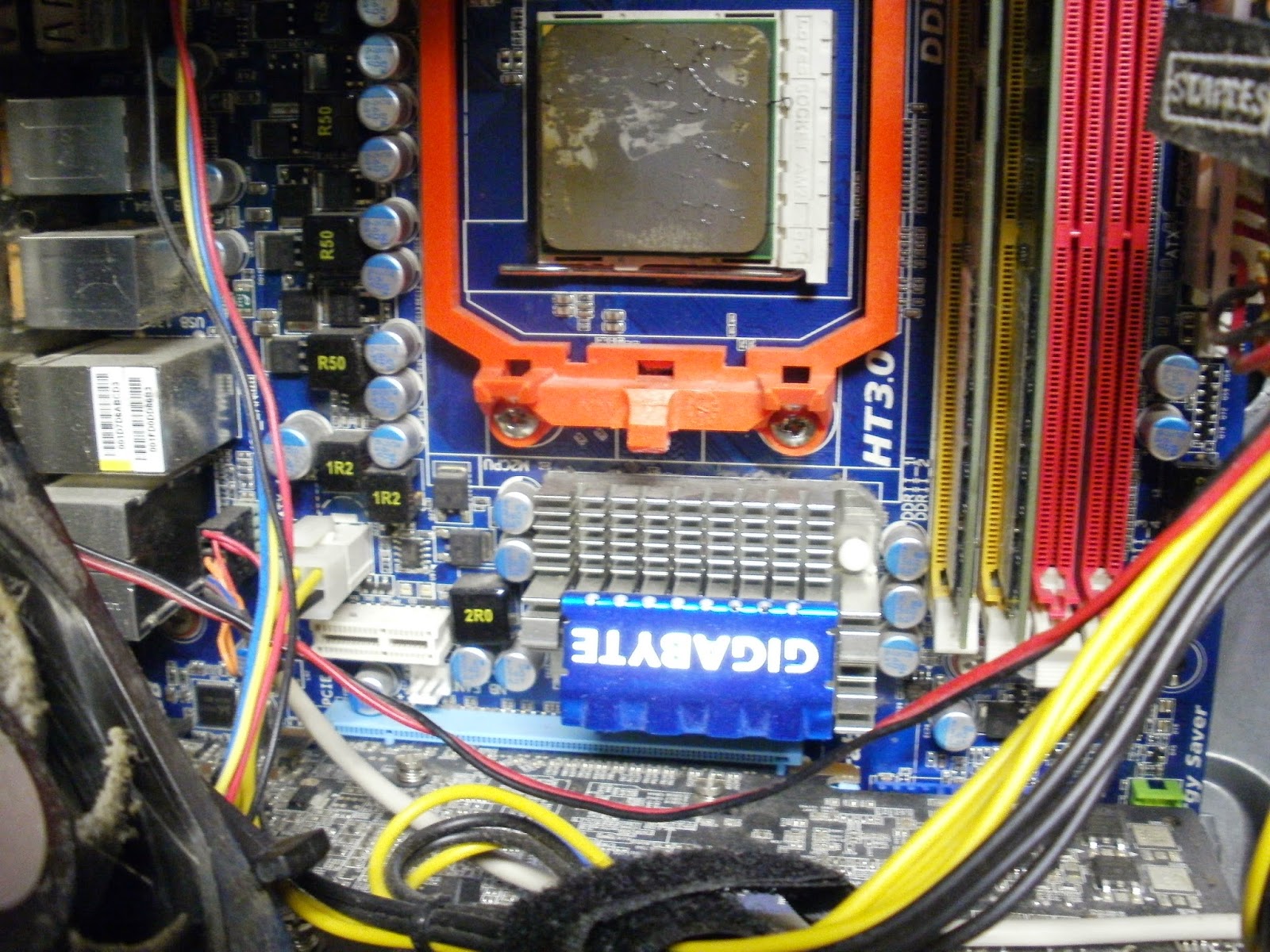 Here's my finger sort of pointing to it, for scale. 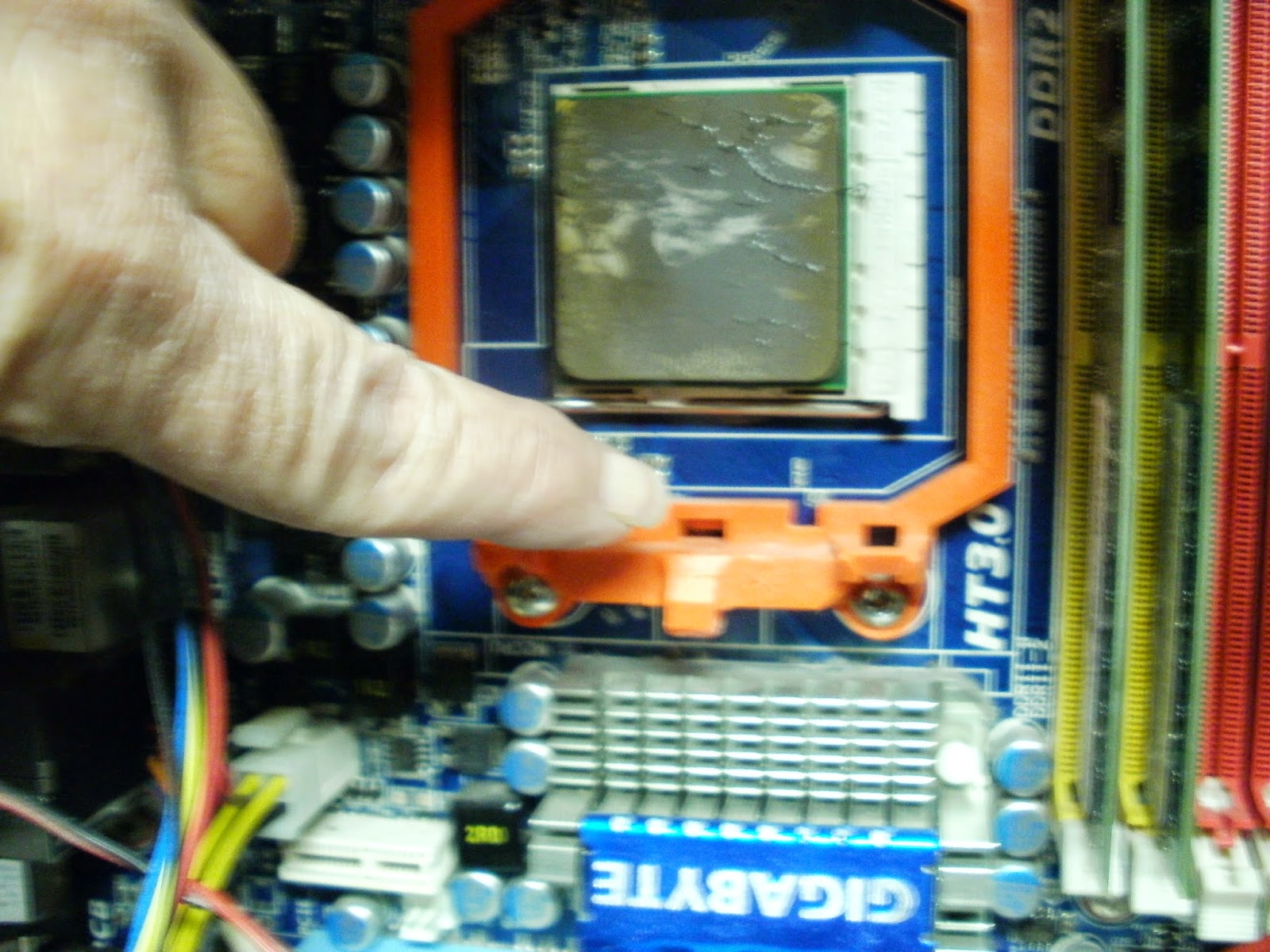 And just to show how tech savvy I am, here's a pic of the stuff I piled up to set the fan on while I was doing all that repair work. 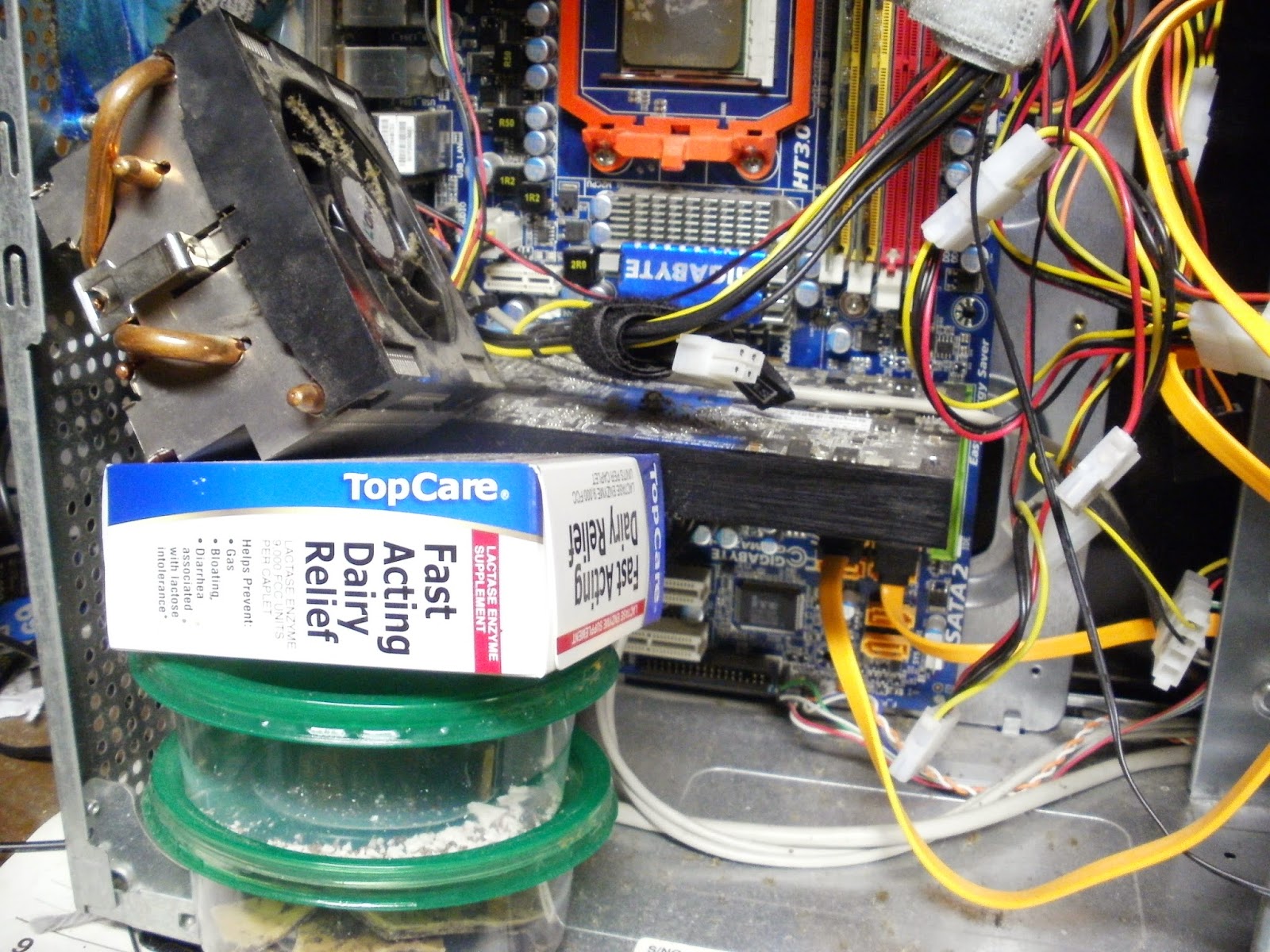 The wires where it plugged into the board (the motherboard?  the surfboard?  I have no idea.) were too short to let me set it down and it didn't seem like a good idea to just let it dangle.  (What?  Just unplug it and set it aside?  Are you crazy?  Then I'd have to figure out where I unplugged it from.  Which would be perfectly clear at the moment I unplugged it, but fraught with indecisiveness when it came time to plug it back in.  Here?  That doesn't look right.  Here?  No, here?  Crap.)
Remember, I'm the one who can't even work a tube of superglue...