Just a hint of pink

Well, some pink happened this week, but I have to confess that half of it was accidental.  One of the things I forgot to mention in my last post was that I'd unearthed the cut pieces to make a pink Jacks block.  No idea when I cut this out - probably the last time pink rolled around in the RSC. 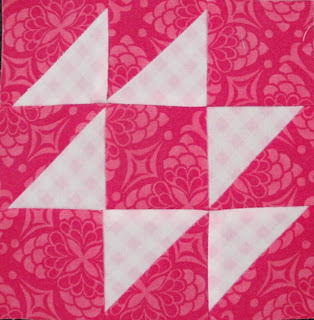 It only took a minute to sew it up, so I did.
Then when Angela announced that pink was the color for May, I cheered!  I don't often get a chance to be ahead of the game!

This pinwheel block was purposeful, though. 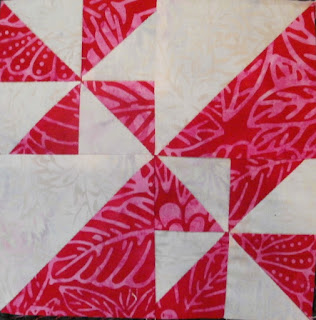 Now I'll have to pull out the pinwheels bin and figure out how many pink ones I have.  Or how many pinwheels I have total, for that matter.  I've been making them for a good long while, and I have no idea how many have accumulated.

I found what I think is the perfect fabric for the setting triangles for Sea of Tranquility.  Just a few of the blocks to see if I was right. 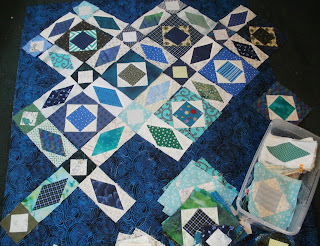 One of today's projects was to cut up these mistakes from On Ringo Lake.  Apparently I'd gotten a bad case of brain farts while cutting out those diamonds and intermittently (though repeatedly) cut them too short.  Naturally I didn't notice until I was trying to make them fit with the other Ringo bits.  You know, the well-behaved bits that do what they're supposed to do and fit where they're supposed to fit.
Luckily, I could get perfect HSTs for Totally Demented out of the mistakes, so it's not all bad. 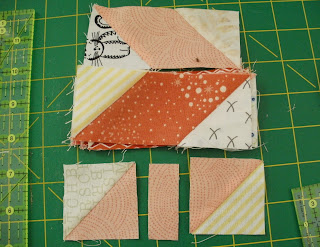 I still did some grumbling though.

So, while I'm waiting for the energy to lay out SofT, I keep a stack of bits for Checkerboard Rails near at hand as I'm chugging along on triangles for Totally Demented.  (Sometimes a nice mindless straight seam is a lovely break!) 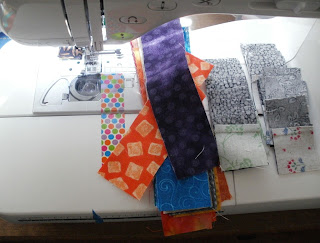 In the spirit of curiosity, I laid out the blocks I've gotten assembled so far.  I've been making them in pairs as I go along, to help me keep the block counts even.  (Already stepped into the block trap once.  Trying not to repeat myself.) 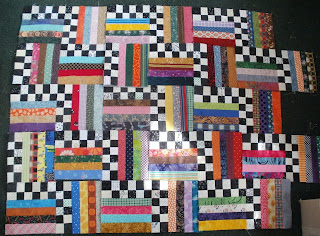 Looking pretty spiffy, but Bonnie Hunter set hers on point and I'd promised myself that I'd give it a shot myself when the time came. 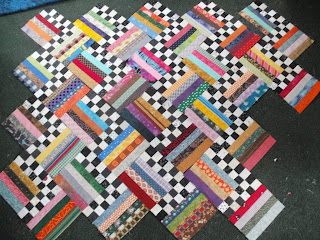 Of course, that brings up the problem of how to fill in those triangular edges.  Bonnie ended up slashing blocks on the edges, but I was hoping to avoid that. 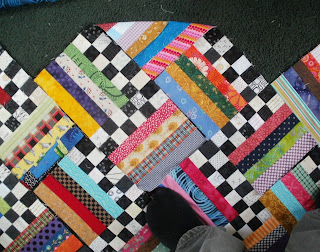 I cobbled up a square of strips without the checkerboards and folded it in half to see how it would look.  (And yes, that's my foot.  It's been a long time since one of my feet has sneaked into a shot.)

I decided to mull it over a bit, then stepped back and saw what my real problem was going to be.
Take another look at the next to the last photo.  Compare the corner at upper left with the corner at upper right.
Gah!
Left corner has one block, right corner has two.  I fiddled around and folded and fumed for a bit, trying to work out the easiest way to resolve the corners without sacrificing any of those lovely checkerboard lightning bolts.  I really really really want complete streaks of lightning running from top to bottom.
I finally decided that this was the best I was going to get.  I laid some fabric down the edges, right at the tips of the checkerboard points to make sure I could live with it. 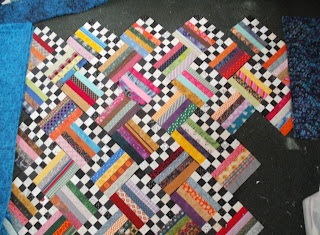 It'll do.  I'll fill in the edges with setting triangles cut from strip sets and it will be a happy scrappy quilt.

Carrying on in my little chaotic corner, 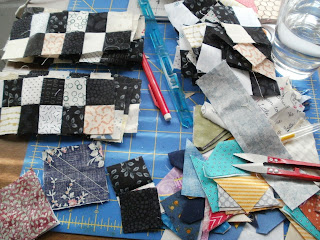 and linking with SoScrappy for ScrapHappy Saturday, and with Quilting is more fun than Housework for Oh Scrap!  Come join the fun!