I could have sworn I drew a line somewhere...

As you all have probably guessed, I really like animals.  We have sheep, and rabbits, and turkeys, and chickens.  We're discussing getting some ducks, as well.  And maybe a couple of geese while we're at it, since once you've starting collecting feathered folk, where do you stop?
And that's just the outdoor critters.  Inside, I have a Siamese Beta fish and Madman has a pet rat.  We used to have a little cat, my beloved Ursula, whom we haven't replaced.  (Though we certainly miss her - especially with the mouse population explosion we've experienced this year.  Madman and his mousetraps just can't keep up.)
Just so we're clear, with certain exceptions (like the occasional house chicken) (and hatchlings) (oh, and the baby bunnies) (hmm...), outside critters are supposed to stay outside, and inside critters stay inside.  The sheep don't get to come in and play Katamari Damacy on the Playstation, the turkeys don't get to play Freecell while eating pretzels.  Outside, outside; inside, inside.

This afternoon I was in the bathroom, sitting you-can-guess-where, minding my own business, when I heard a skitter of little feet on tile.  I looked over just in time to see a little white ferret-y thing with a black-tipped tail dash across the bathroom floor and jump through the access hatch on the side of our whirlpool tub.
"Hey!"  I said, no slouch at the quick witticism.

Which is a weasel. 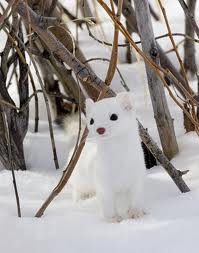 There's still a weasel in my house.

We're guessing that he got in by squeezing through one of the holes where the plumbing pipes go through the floor.  The access hatch on the tub is open because the door came loose a while back and we haven't gotten around to fixing it.  (There are always so many other things to do - like fixing sheep fence and catching errant poultry, for instance - that it's a job that has lingered near the bottom of the To Do list.)   Hopefully, that was his way in, and he's gone back out.
Because the room he came running out of when I saw him was our bedroom.  I'm trying not to think of little creepy weasels under the bed.  Or on the bed.  At night.  Because they're nocturnal.  And I'm not.

I think fixing that access hatch is going to get moved up on the To Do list.