That's what I get for ignoring that little voice in the back of my head...

Remember that post where I was almost done with the second sock?  (You know what's coming, right?  Cue Ominous Music.  Yep.)
I'd been knitting the foot portion of the sock, trying to ignore that little niggling voice in my head that kept trying to tell me that Something is Wrong.  "No, no."  I kept saying to myself.  "It's really fine.  The fact that this sock seems shorter than the first one is clearly an optical illusion, since I've knit the same number of rows of the pattern stitch from the point of the gusset to the start of the toe.  I know this because I've counted them 14 times.  Not that I'm worried that there is a Mistake somewhere or anything.  I just like compulsively counting rows of knitting.  Especially with my hands over my ears: one, la la la, two, la la la, three, la la la..."
Eventually, though, even I can't maintain that level of denial.  The second sock is clearly shorter than the first, despite my best efforts to stretch it.
Once I stopped looking just at the knitting after the gusset, and looked at the gusset itself, I found the problem.
Here are the socks, lined up sole to sole: 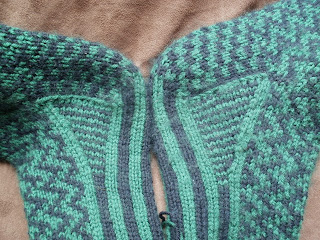 The one on the right is First Sock.  The one on the left is Second Sock.  See the problem?  Count the rows in the gusset - which is easy to do, since they're conveniently knit in stripes.  A fact I ruthlessly ignored in my denial.

I swear those sheep are out to get me

I love sheep.  I love sheep in general, and I particularly love the sheep we own.  But sheep have a capacity to make you crazy, like no other animal.
Remember this?  And  this?  And this?
Well, they're at it again...
Madman had to be out of town this weekend, leaving about 7pm.  I was reading my email, anticipating a quiet evening of spinning while watching a movie.  Out the window, I could hear Goldie complaining about the poor quality of the hay I'd fed them for supper.
Then I listened closer and realized that it wasn't her disgruntled blatt - it was her "OMG The World is Ending!!!" blatt.
Crap.
I bolted for the back door and looked out.
Goldie and Orion were both trotting around OUTSIDE the pen.  I don't know if she was hollering to me for help, or just chastising him, both for being out and for leading her astray, but she was making enough noise to rattle the windows.
I scrambled for boots and a jacket and dived out the door.
Onyx and Merlin were standing at the fence, all goggle-eyed.  Goldie and Orion continued to mill around in confusion - Orion kept trying to go down the hill, headed for the open road, but he couldn't get Goldie to follow him, so he'd turn back and run around her again.  (I think he still dreams of Indiana...)
I ran for the gate (which was still standing, unlike the last escape (see link above)) and tried to open it to herd them back inside.  Unfortunately, after the last escape, we'd tied it shut with baling twine and bungies - we get in and out by stepping over the wire - and I couldn't undo any of the knots in the dwindling light.  (Cuz, yeah, twilight is the best possible time to make a jailbreak when you're a sheep.)  I ran for my car, where I have a box-knife that I use at work, and ran back to the gate and started hacking at string.  By that time, I was gasping from anxiety (and running up and down hills), and my hands were shaking so hard that I'm lucky I didn't hack a finger off, too.  I was seriously grumbling at them - "Oh, sure.  Dad's not even gone for half an hour, and already you kids are acting up..."
When the last string was cut, I dumped some grain into the food dish to keep my non-escapees busy and inside the fence when I opened the gate, and scooped up another cupful for wayward-sheep-luring use.
Orion took one look at Onyx and Merlin chowing down and bolted off around the fence.
"Okay," I thought.  "One at a time.  Get Goldie now, then I'll worry about Orion."
I was shaking the cup of grain at Goldie, trying to get her attention, when Orion mysteriously appeared inside the  pen, headed for the food dish that Onyx and Merlin were blissfully sharing.
Apparently, against all odds, Mr Dumbass had remembered how he'd gotten out and had gotten back in the same way.
So, there I was, in the gathering darkness, with the most nervous of our sheep left to catch.  And there she was, in full-tilt panicking nervous breakdown mode.  Both of us desperately wanted for her to be back in the pen with the other sheep, but only one of us had a plan for how that could happen.
Luckily, the one of us was me...
I kept rattling the grain, trying to coax her closer to the gate, but she was so skittish that she kept shying away.  It didn't help matters that the grain rattling was attracting the attention of the sheep inside the pen, as well.  I had to keep scooping feed into their dish to keep them occupied, while cooing to Goldie that everything was going to be all right if she'd just come-freaking-closer and let me lure her through the gate.  She'd inch toward me, watching the grain, then suddenly take off and run along the fence or down the hill.  A couple of times I almost had her, but the very act of opening the gate a little wider scared the crap out of her.  (Goldie has never been a fan of change of any sort, and moving gates are badbadbad in her book.)  I had to stand in the opening, prepared to block any further escapes from the sheep behind me, while appearing harmless and comforting to my crazed ewe.
I had just dumped more grain into the communal dish behind me when Goldie apparently couldn't stand it anymore - the sight of the others getting grain and her not - and she bolted through the narrow opening between me and the gate, knocking me down in the process.
Well, whatever works.
I did a quick-tie on the gate, then started walking the fence, trying to figure out how they'd gotten out in the first place.  The answer?  A corner post (wooden) had broken at ground level and collapsed, taking the fence down with it.  Goldie and Orion had just strolled out over the downed wire.
By this time it was almost full dark.  I straightened the post back up and tried to wedge another post into the ground to prop it with.
Orion, our little Mr Dumbass, came running over and head-butted the prop, knocking it out of my hands.
"Hey!  Stop that!" didn't have much effect.  Every attempt I made to plant the prop resulted in  another head-butt.  Apparently he saw the prop as a rival.  Or something.  I hollered each time he did it, calling him a wide variety of names, and finally had to resort to smacking him on the nose to discourage him.
By the time I got the post into a more-or-less stable upright position,  it was too dark to see what I was doing.  I can only hope it holds long enough to keep them in until I can finish repairs in the morning.

Can anyone remember why I wanted to raise sheep?
Posted by gayle at 9:36 PM 6 comments:

No Lambies Yet, and Other Mid-March Updates

(And how did it get to be the middle of March, anyway?  Did we skip a week or so somewhere?  Why wasn't I told?)
I've been spinning a bit here and there.  My long-draw is slowly improving as I get more practice, but I still haven't put in enough time with it for it to seem easy.  Not proficient, by any means.  (Is there such a thing as antificient?  Still antificient...) 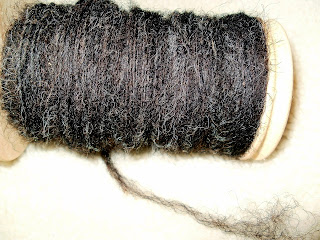 And still unable to get a good pic of that fiber.

Still knitting.  I only seem to get a row or two done a night, but patience is rewarded.  (Eventually...)  I'm this close to finishing the toe of sock #2: 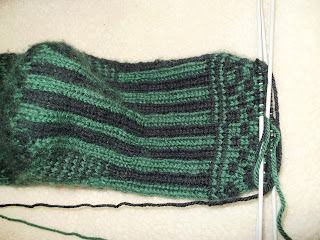 And it's time to think gardening.  The damn snow will be gone soon - Spring is going to come.  (I keep telling myself that to keep my spirits up...) 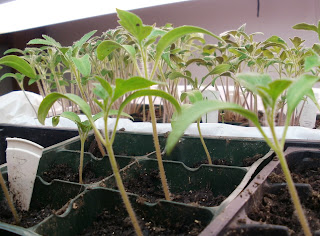 Tomato seedling are happy little things.  Notice the white marker in the lower left corner - I cut up the lid from a sour cream container to make plant markers.  Usually we use the cut-up container itself to make markers from, but this year I had more lids than containers, so I'm testing the lids.  (Write on them with pencil, rather than pen or marker.  Ink fades in the sun, pencil does not.  Just a little tip from your Auntie Mango.)

Last chance for entries in the great LambWatch of 2012.  I really am going to close entries this time!
Posted by gayle at 10:28 PM 8 comments:

Due to interest, and the fact that we're still lambless so far, I'm extending the guessing until March 15th.  Come one, come all!
Posted by gayle at 3:37 PM 1 comment:

I've been spinning for a number of years now, but up to this point, all I've done is worsted spinning.  Since mostly I spin laceweight, or in the case of Goldie's fleece, yarn for cable-y knitting, worsted has suited my needs just fine.
But Onyx's fleece...
Oh my.  It's fluff.  It's wild and crazy.  It's soft, but has a mind of its own, and its mind wants to head in all directions at once.
No way was I going to be able to tame it into a worsted prep.  Even semi-worsted was a foolish hope.
Time for me to bite the bullet and learn to spin woolen.
Specifically long draw. 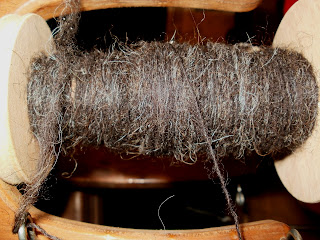 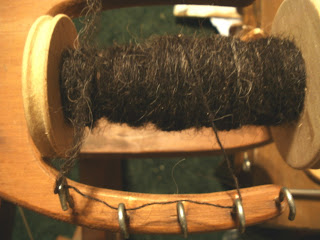 (photo without flash)
At first, I tried working from memory - I'd seen spinners doing longdraw, and I'd watched some videos once upon a time..
Nope.  That wasn't it.
So off to YouTube I went, and studied the videos.  And tried again.
And, holy shit, it works!
And it's fast!  I've been doing the inchworm short draw for forever, and the contrast with long draw couldn't be more dramatic.  I filled half a bobbin in practically no time.
As with any new skill, I need a lot more practice.  A lot, oh, my, yes.  But I'm looking forward to it.  What a rush!
Posted by gayle at 8:59 PM 3 comments:

I still can't get it right.  If I get the color right, the focus is off.  If I get focus, the color and/or brightness suck rocks.
I've tried every setting on the damn camera, and this is the best I can do... 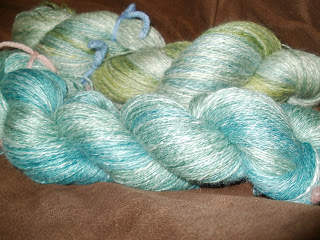 Merino Angora Silk - done!  (I wish this photo did justice to AnnaMarie's lovely fiber...)
3 oz - 1145 yds.
Enough laceweight to knit a shawl, if I ever finish any of the shawls I've already got in progress.  (Trying not to think about Maplewing and Lyra.  And the Feather Duster that I want to make out of the merino/tencel I spun a couple of years ago.  Shhh....)

Hey, look!  I finished something!

This is so cool

Scientific American has the best video - go here to watch!  Love the artwork!

And don't forget to enter the LambWatch contest - almost out of time!
Posted by gayle at 9:02 PM 3 comments: