There's a new feature on the dashboard of my car. It's a little light that says "Check Engine."
Okay. I opened the hood and checked the engine.
Yep, still there.
Well, that was easy enough.
But that little light is still on...
Posted by gayle at 8:38 PM 4 comments:

So, after much head-bashing, I've got charts that fit on a page, I've figured out how to add them to a text document, and I've started typing up instructions. At this rate, I should have this damn pattern ready sometime before summer... Fall, at the latest.
How about if everybody just comes to my house, and I'll teach the mitten, instead? It would be easier on all of us, I think. I make pretty good coffee.
BYOB, though.
Posted by gayle at 6:13 PM 3 comments:

Caught in a Whirlwind

So there's been all kinds of activity here, chez Mango, not that you can tell from my posting.

Item 1: I survived my first jury duty. (Two more to go, then my civic duty is over for a while.) It was actually very interesting. I enjoyed all the little courtesies and rituals between attorneys, judge, and jury. (It's pretty cool to have someone call "All rise!" when you walk into the courtroom. I'd thought only judges got that one.) And the case had all kinds of drama, with high-speed car chases, sideswiped police cruisers, finishing with a two-car bang-up ending. Though the drama was a little hard to maintain in the dry tones of the state troopers' testimony... In the end, we deliberated hard - just like the judge told us to - and nitpicked each charge until we were all satisfied with our decision. As a group, we were thoughtful, careful, and conscientious.
And, Norma? I made a point to notice the stenographer - actually, stenographers, since we had a different one each day.

Item 2: Since I needed a knitting project for the downtime in the jury room (and believe me, there was a lot of it. A 9am start time was actually closer to 9:25; a ten minute recess usually lasted 20 minutes.) I cast on Kathleen Taylor's Picot Hem Stranded Snowflake Hat. (Rav link)
Because of course I needed a new project... The Selbuvotter glove was too dangerous looking with all those pointy metal needles, and the thrummed mitten was too messy to try to tote around (all the jurors would have ended up covered in fuzzy fibers. Sorry sorry...) The hat was innocuous-looking enough to make it through security - they might have let the glove through, but I didn't want to take the chance of having it confiscated, leaving me knitting-less for the day. 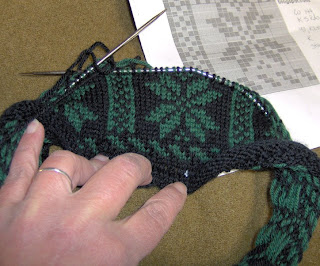 I got a bit of knitting done, anyway. The other women on the jury lamented not bringing their knitting and crocheting...

Item 3: I got my eggplant plied. (Does that sound odd to anyone else? Try reading it out loud. Maybe it's just me...) Anyway, the original plan was to spin for 10 minutes a day, but I kept getting sucked into the spinning vortex, and next thing I knew I had 300+ yards of 3ply. The best part is, it's an actual worsted weight yarn - which is the first time I've been able to achieve that weight. (My default is fingering - I think it's my innate stinginess trying to coax as many yards as possible out of a hank of fiber.) Laurie is the one to thank for it - she gave me excellent advice on tightening the take-up, and next thing I knew, I had real yarn! She's my hero! 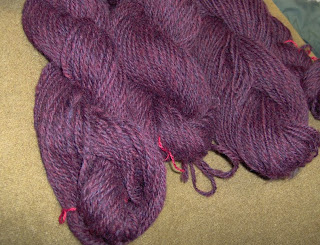 And just in case I get any spare time... 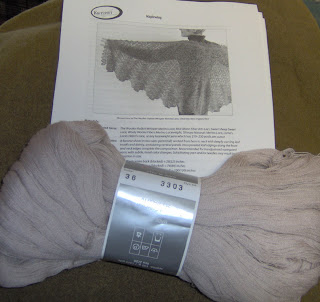 Item 4: I bought Maplewing. And yarn. (I lusted for the red/orange of the original shawl, but knew I would never have anything to wear that color with. So I wimped out and got a neutral sort of tan. Though I may go back to the LYS and get the deep evergreen laceweight they had. Or that dark purple. But since everything I make lately seems to be green or purple, maybe I should stick with the tan just in order to break it up...) I'm trying to resist the urge to cast it on Right Now. Because I have a feeling that if I cast on one more project, my house will explode. Critical mass was reached long ago...

Item 5: Still working on the second thrummed mitten. I'm starting to collect photos for a post for the pattern. 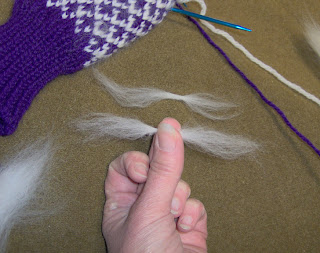 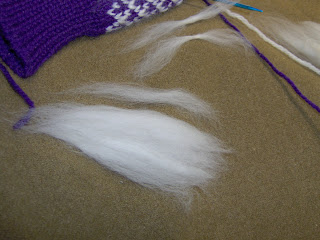 Oh, yeah. Madman and I really know how to enjoy a romantic weekend. Today we finally did in the last of the excess roosters. They had gotten a reprieve when the cold weather set in. I won't go into the icky details, but butchering chickens in freezing weather just doesn't work.
Since today was a beautiful day, sunshine, temps in the high 40's, what better way to spend it than making a little mayhem? I've documented our system before - we've been at this for awhile now.
And the best part? After all the feathers are cleaned up, we get to have this for supper: 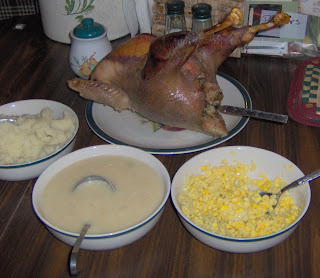 Roast chicken, with all the fixin's. Stuffing, mashed potatoes and gravy, and corn from last summer's garden. (And yes, that's a spoon up that chicken's butt. Got to get to that stuffing somehow...)

A Perfect Day - except for the shoe-shopping

I hate shoes. I hate wearing shoes, I hate looking at shoes, I hate shopping for shoes, I hate even thinking about shoes long enough to type this sentence.
I have short wide feet with a high arch and a high instep. The shoebox fits my foot better than the shoe. Shoe shopping involves trying on an excruciating number of shoes, looking for just one pair that doesn't make me walk with a limp. To make matters worse, my feet are slightly different from each other as a result of a horse tromping on one of them when I was a teenager. So, just because I find a shoe that fits my left foot, it doesn't necessarily follow that its mate will fit my right.
So I buy as few shoes as possible, and wear them until they're dead. Since the pair I wear to work every day had reached the point where there was no tread left and the uppers were falling apart, I had to bite the bullet and replace them.
Mission accomplished. After trying on umpty-two pairs, growling up and down the aisle, I have a new pair of shoes. I don't have to think about shoes again until these fall apart. *whew*

Now, I say all this in order to illustrate how the rest of my day more than made up for this level of misery.
I had lunch with my favorite Princess! Live and in person! And meeting her was even better than I had hoped - and my expectations were pretty damned high, I tell ya. She's even more fun in person than she is in print. I think we must have warped the space-time continuum in order to fit all the conversation into the actual time we spent together. I'm very happy she came home to Vermont.
Next time we get together, I'm bringing my wheel. If we can fit in all that talking, imagine how much spinning I could get done!
Posted by gayle at 4:08 PM 4 comments:

Remember this?
That's where I am again. Only in the other direction.
I knew I should have put those watch instructions in a safe place.
Damn.
*sigh*
.
Posted by gayle at 11:27 PM 1 comment:


When you go into court you are putting your fate into the hands of twelve people who weren't smart enough to get out of jury duty.
-- Norm Crosby

That says it all.

I've started the second bobbin of the purple roving. I'm trying to just spin in short intervals, since I've been not spinning for so long. My back muscles on my right side bother me if I do too much too fast (which is what I want to do. It's really hard to stop and step away from the wheel. Love. This. Color.) It's the same set of muscles that used to bother me when I was working as a florist - especially if I was doing something fiddly like making a lot of corsages for a wedding. I'd end up with muscle pain for days. I think I tense my right shoulder, and the tension just echoes down through the muscles of my back.

Still working on the thrummed mitten, too. The chart looks like it's right (so far so good!) - it's not a perfect match to the #1 mitten, but it's what I had actually intended in the first place, so it's all working out for the best. I need to tinker with the chart a bit, though, to get it down to a reasonable size. It's still bleeding over onto another sheet of paper, so I'm trying to make it a little more printer-friendly.

And as for cussing the snow? That's pretty much non-stop this time of year. I want Spring, dammit! Not another 12 freakin' inches of freakin' snow. Which has been falling sideways all day.