Woohoo! Made it there and back again!

And no more crazy car disasters.
Though my youngest and I were in two similar almost-accidents in two separate cities at about the same time on Friday, as the last of the ill-luck still tried to prevent our trip...
I've got pictures of piggies and alpacas and chickens to flash at ya, but it'll have to wait till tomorrow. I'm way too tired to try to cope with pictures tonight.
There. Christmas 2010 is officially over. I can start my Christmas knitting for 2011.
(Yeah, right.)
Posted by gayle at 8:32 PM 1 comment:

My oldest daughter pointed out that my life is starting to show signs of Jasper Fforde-ishness. My youngest daughter and I have long planned to go to see my dad this coming weekend, for a belated Christmas celebration.
First her car blew its hood off on the interstate. A week or so later, my car tried to drive a sparkplug through its own hood.
As my oldest pointed out - "Are you really sure you should go, when not one, but two cars have blown up in order to keep you from making the trip?"

On a high note (I think. Or I thought. I may have to think some more...) my car got fixed today. Youngest daughter's car is still in the shop and may be ready tomorrow.
Should we take that as a good sign, or a bad one?
Posted by gayle at 6:54 PM 5 comments:

Well, the good news is that the temperature is up to -8F...

Which is considerable warmer than the -30F we woke up to.
I'm not a fan of cold.

Part of the bad news is that we're down to no working cars. Madman's car went into the shop Friday with a leaking gas tank and spent the weekend there. Sunday my car blew a sparkplug right out of the engine, stripping the socket so a new plug won't hold. It's going into the shop today, if we can figure out a way to get it there. (She currently won't start. We don't know if that's due to the cold or the engine malfunction.) (And she's not happy running on 3 cylinders anyway, and there's a serious lack of compression from the missing plug.) (And what is it with me and exploding cars?)
We'll rescue Madman's car today, which is at least drivable as long as he keeps the gas tank less than a quarter full. Not at all convenient, but at least possible. (The garage is hunting up a replacement gas tank, so can't fix his car for a bit anyway.)

The Joy of Living in the Deep Freeze

The temperatures for the next couple of days are predicted to be Frigid with a capital F. As in, if we want anything warmer than zero degrees, we're all going to have to go outside with flamethrowers and other incendiary devices.
Since our pipes frequently freeze when it's that cold, I've taken the precaution of filling the coffee maker with water, as well as the chickens' waterer, the sheep's bucket, and the jug for the rabbits, all ready for the morning.
Now if only I could fill the shower...
Posted by gayle at 10:24 PM 6 comments:

I think I just hurt myself laughing...

Ooops. I cast on ANOTHER project.

Startitis is really chewing on my butt. In the last week, I've come across at least a dozen projects I want to start right now, and to make matters worse, the new Knitty just came out.

I finally succumbed and cast on. But no one will fault me, I think. 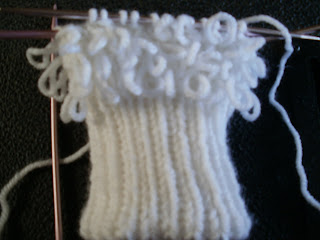 I'm making one of these, in hopes of writing up the pattern.

We've brought another one over to the Dark Side...

Check out this blog of a brand new knitter. While you're there, please say something encouraging.
Oh, and tell her Mom sent you and sends her love.
Posted by gayle at 8:50 PM 2 comments: 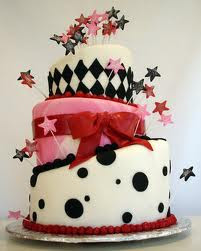 It's my blogiversary. Three years ago today I started this strange journey.
When I wrote that first post, I thought that I would post a couple of times, and then the blog would end up tucked in a plastic bag in a corner somewhere, just one more UFO in my collection.
Who knew I'd still be here 3 years later?
I love the blog, I love the friends I've made, I love reading the comments on my weird ramblings.
Here's to the next 3 years!
Posted by gayle at 10:02 PM 13 comments:

Madman gave me a new camera for Christmas. Being me, I was resistant. Nothing wrong with the old camera. (Which took me two years to figure out how to use, btw.) No, no, this one is better! New features, new capabilities! (Two years, remember? That was for simple. That means my learning curve on this new camera will be at least five years. Maybe more. By which time he'll probably have bought another new camera...) (sigh) (Don't forget I'm the Luddite who wants a cell phone that only makes phone calls.)

So, I've started playing with the new camera. Here goes nothing. (I'm having nightmares of posting pictures the size of a house...)

First up, a size comparison of the eggs we've gotten lately. (The chickens have started to lay again! Yay! )
This is the largest next to the smallest. The little fella is a 'pullet pellet' - a young hen's first egg. The largest is from one of our older hens. (And makes me cringe just looking at it. Oh, that poor chicken...) 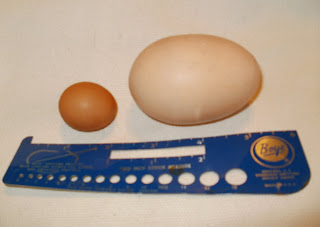 And look! I knit something! And finished it and everything! 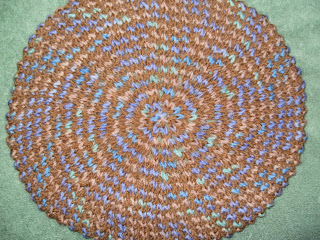 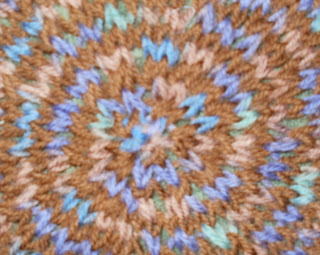 First FO of 2011.
Yulie by Grumperina.
Yarn - Lion wool
Mods - only one. I used tubular cast-on, which is my standard start for any 1x1 ribbing.
A quick easy knit. Love the hat, love the pattern, love the spiral that is formed by the knitting. I'll probably make this again - maybe a slouchier version.