So, "normal" is a quality to which I have never aspired. However, this time I may have gone too far.
I have given a chicken a bath.
*sigh*

We keep chickens. We like chickens. We started a couple of years ago with a dozen Rhode Island Reds, kept one rooster and all the hens, and put the extra roosters in the freezer. They lay enough eggs to keep us (and most of Madman's relatives) well-supplied.
Last spring we got almost 2 dozen something-or-other-crosses for meat, raised them up all fat & sassy, and put most of them in the freezer by the end of summer. But between chickens & garden produce, the freezer got full. So the last six meat birds got a reprieve. We moved them in with the Reds, and after a little staring-down and adjustments in the pecking-order, everyone was getting along fine.
Until one day last week, that is. I'd noticed one of the meatbirds was looking pretty bedraggled and was always off sitting in a corner by herself. I tried to keep an eye out for her each time I went out to tend them, but it took me a couple of days to realize that she was sitting because she couldn't stand. And since the spots she was sitting were usually under the roosts, she was getting pretty crappy-looking - both literally and figuratively. (Little known fact: chickens poop in their sleep...)
I finally rescued her when I saw that she had been pushed out of the coop into the snow in the chickenyard, and had that hopeless this-is-the-end look in her eye.
So there I was, carrying a cold, wet, covered-in-chickenpoop hen into the house. Of course, the fact that she didn't want to be carried just added to the fun - she was actually a cold, wet, flapping, squawking, extremely slippery, covered-in-chickenpoop hen being carried at arm's-length by a small woman who was starting to regret the rescuing. And the poop.
Let's just say the bath was a real treat... Once she settled down some and stopped the wild oh-my-god!!! flapping (whether because she was exhausted or if she just decided that even if it was the end of the world, at least it was a warm end of the world), things went a little smoother. But I still had to break out a big bottle of disinfectant afterward... And even after two showers (mine, not hers) I still wanted to boil myself.
Here's the after-shot:

Sorry, no before shots - no way was I going to go grab the camera with what I had on my hands...
And here she is all dried off. Not quite as pissed-off looking.

One of her problems was a big gash in her side - our rooster is quite... ummm.... vigorous in his attentions to the ladies, and his spurs occasionally cause damage. She's now healing quite nicely, though still pretty unsteady on her feet.
Now if we could only do something about the smell.

Now, I admit to being easily distracted (look over there! shiny!), but this is ridiculous.

Getting some pictures together to explain some of the distractions.

So, in my excitement at finally breaking through the procrastination and starting a blog (it only took me two years...), I forgot to introduce myself.
I'm Gayle (aka mangofeet to various friends), living in extreme northern Vermont. Think cold. With lots of snow. Then imagine it even colder, and you might come close. We live in a pocket of zone 3, mostly surrounded by zone 4. We like wool up here.

I've been knitting since I was nine, so that's *mumblemumble* years. (Over 40, anyway... ) And the great thing about knitting is that even after all those years, I'm still learning new things.

I'm also a dollmaker - cloth dolls, though I used to do porcelain. Fairies are my favorite - just a sucker for those gossamer wings. 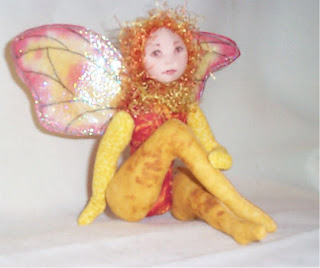 I make quilts - here's the most recent. It's for my new grandson: 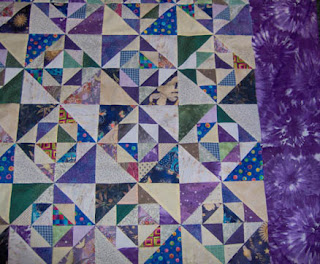 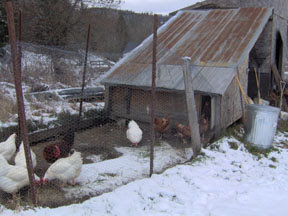 and keep a big garden. (Sorry, no pics. It's under a couple of feet of snow right now...) We're trying to have more control over what we eat, and are very interested in sustainable agriculture. We're talking about raising rabbits for food and fiber. (As a spinner, I'm very interested in the fiber. As for the meat, part of me is saying "mmmm" while the other part is saying "but... but... cute little bunnieeees...." We'll have to wait and see on that one.) 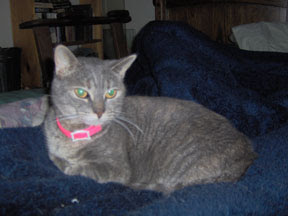 I made Elliphantom's wonderful Herringbone Mittens as a Christmas gift for my husband - with one major change... Notice how plump the mitten looks?

I'd been reading about thrummed mittens all over the place, but all of them seemed to be just rows of "dots" with the thrums showing up like the lice pattern in Scandinavian knitting. I wanted something a little more interesting to knit, so I add thrums to the charts, and came up with these.
I think they'll be the warmest mittens, ever. There's the warmth of the two-color knitting, plus all that fleece. Since Madman works outdoors a lot, warm is the way to go.

(And woohoo! Looks like I got the photos in the right place, and maybe the link will even work!!)


Update: I'm now working on another pair of these mittens - see my October '08 posts...
Posted by gayle at 2:12 PM No comments: