I only got to spend a couple of hours at the sewing machine this week, what with one thing and another.  Luckily I'd already cut out the pieces I needed for the last aqua Sand Castle for April. 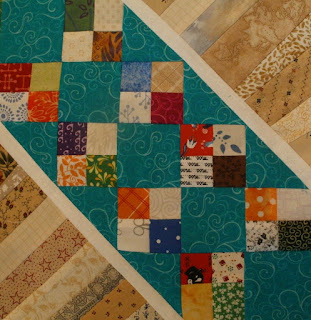 In temperature quilt news, I'm caught up with my April goosies.  Here's a week's worth of flying geese waiting to be joined to the April column at left. 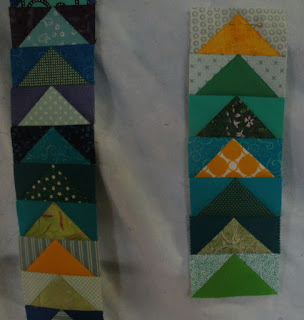 Happily, we had two more days in the seventies so I got to add some more yellow to the turquoises and greens.  Of course, today we hovered in the 30's and 40's, so I'll have to use more blues again.  Oh well.  The tide is turning!

And for those of you who might have been concerned about me, I'm truly not starting a Jack's Chain quilt.
Truly. 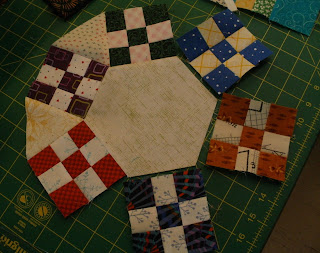 It's a mere coincidence that some nine patches attached themselves to that big hexagon while other nine patches started milling around shouting "Me!  Me next!"
So, not a Jack's Chain at all.  Simply some very confused nine patches.
Yep.


Linking with soscrappy for ScrapHappy Saturday and with Quilting is more fun than Housework for Oh Scrap!  Come join the fun!

I found enough aqua to make another Sand Castle 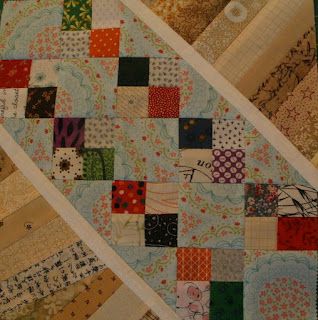 and I even made another Centennial star. 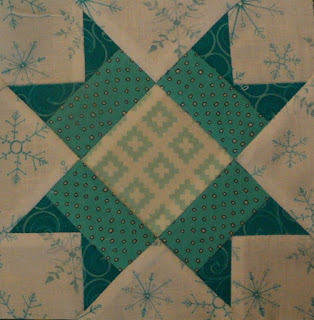 (I keep telling myself I'm done making these star blocks because I probably have plenty, but I keep ignoring myself and making more.)  (It may never end...)  (I may end up with an Extremely Large Quilt.)  (Or two.)

I added the Sand Castle to the design wall where it joined the three other aquas I've made this month.  I've got pieces cut for one more in this color which I plan to get to next week.  At that point I'll sit back and wait for May's color.  (Purple?  Purple would be nice.)  (Or orange.  I like orange) 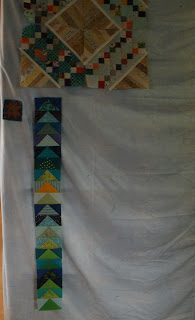 You can also see my April Goosey Temps column in this picture.  We've still only had one day above 70 degrees, so there's just that one lonely yellow goose.  I'm crossing my fingers that there'll be more warm in the near future!

I'm still plugging along with my demented bits, 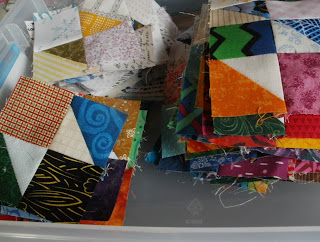 though I'm going to have to stop and make some more triangles soon.  That bottomless bag of HSTs is starting to near bottom after all. 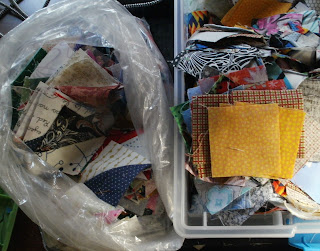 Though there's a new distraction.  I've got strips piled next to my machine, just waiting to be assembled into nine-patches. 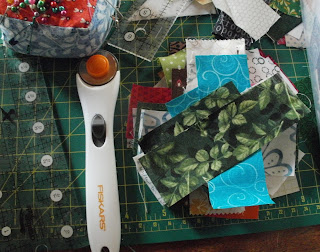 You know, just in case I ever decide I want to make a Jack's Chain. 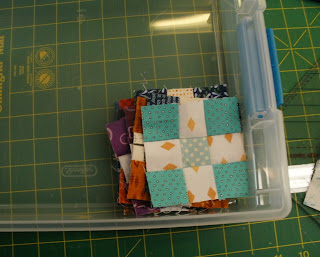 Never hurts to be prepared, right?


Linking with Soscrappy for ScrapHappy Saturday and with Quilting is more fun than Housework for Oh Scrap!  Come join the fun!

Nothing but puttering this week

Putter putter putter.  Luckily I have lots of stuff to putter with.
(I should be trying to get Sea of Tranquility pin-basted, but I seem to be procrastinating there.  I'm looking forward to the quilting part, but the basting is always such a pain in the butt...)

I got one Sand Castle block done in aqua for the RSC.  I've found another scrap of turquoise big enough to make the next block, but I'm going to have to do some serious digging for any others.  Definitely low on aqua/turquiose. 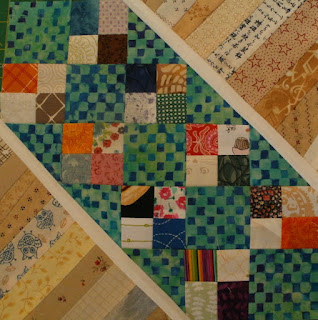 I'm still herding my flying geese in my temperature quilt.  On Monday, yellow made its first appearance as the temp went up to 72 degrees, but it's back to normal now with temps in the 40's to 60's. 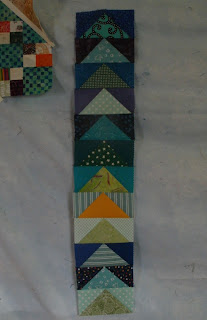 I'm looking forward to when yellow is the norm, with orange for the 80's making an occasional appearance.  Hopefully we won't see too much red - that means the temp would be over 90.  Not a fan of weather that hot, I must say.

And with avoidance extra time on my hands, I pulled out the Demented bin and made a few more blocks. 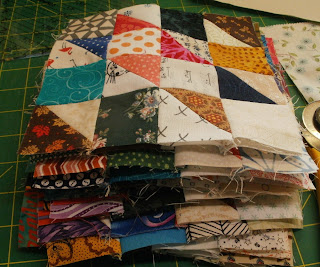 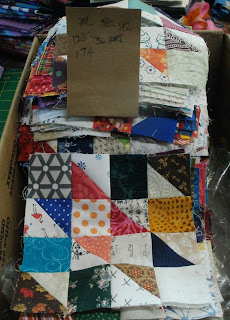 I'll keep assembling the little bits and making bigger bits, until all the blocks are ready to go. 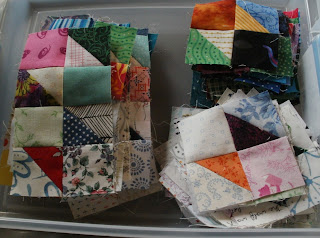 And I found myself making these the other day.  No reason.  Really. 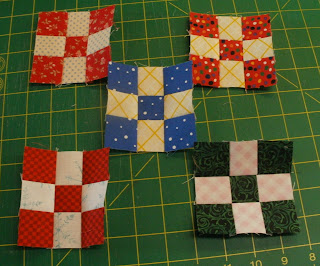 Just because I've been drooling over Cathy's Jack's Chains quilts is no reason to jump to conclusions.
Really.  A person can just have a sudden urge to make nine-patches.  Out-of-the-blue like.
Perfectly normal.
Yep.

Linking with Soscrappy for ScrapHappy Saturday and with Quilting is more fun than Housework for Oh Scrap!  Come see the scrappy fun!

Out with the green and in with the... um... blue-green

Not a big jump on the color wheel this month - Angela announced aqua for April's RSC color.

Between Sea of Tranquility and On Ringo Lake, my supplies of aqua/blue-green aren't as copious as they could be, but I dug in and found a pretty one. 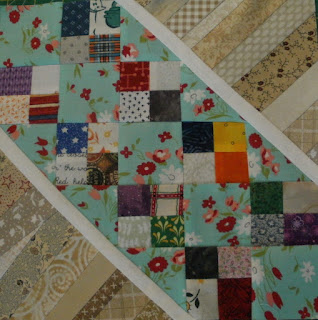 A little more digging found some aqua dots.  You can never go wrong with dots. 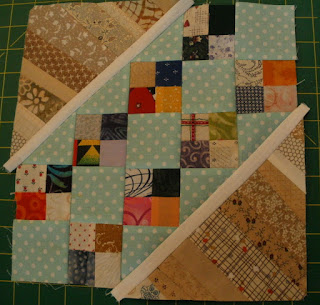 Speaking of wrapping up a month, March's temperature geese are all put together and have been added to the design wall, next to January and February's columns. 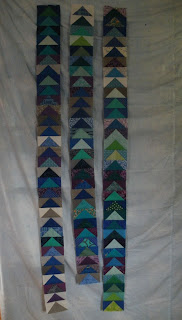 And, speaking of never going wrong with dots, I decided to give some thought to dots for the background sashing for this quilt.
Multicolor dots 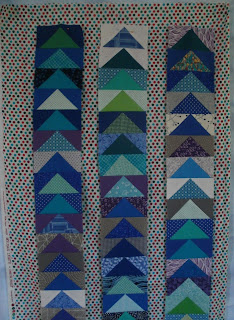 or black and white dots. 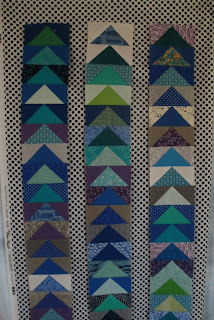 Possibilities, eh?
I think I'll test out some plaids next.
Because you can never go wrong with plaids, either.


Linking with Soscrappy for ScrapHappy Saturday, and with Quilting is more fun than Housework for Oh Scrap!  Come see all the scrappy fun!