Sunburnt, Bug-Bit, and Filthy; or Fun in the Garden

So, yeah, in the last few days we went from temps in the 60's to temps in the 80's. Yay, Summer. The transition was a little rough - no time to get acclimated at all. Sweatshirt and jeans to tank-top and shorts meant I got a tad sunburnt. As in, glow in the dark... Ouch.
But lots of garden chores got done, in between swatting various vampiric insects. I weeded the leeks, the beets, and the strawberries, planted basil, transplanted basil, planted parsley (which I had forgotten to do earlier), more beets, and more swiss chard. (The latter two had germinated poorly the first two times I planted. I'll just keep trying...) I also distributed a large batch of bunny fertilizer. (Gee, that was fun.)
Madman kept busy, too, finally getting the garden tractor running. He has another tractor that he's using for parts - in a few more years, I think it will have completely disappeared, as it gets absorbed by the "good" tractor.

Here's a view of the inside of the hoophouse - our tomatoes are blooming! (And oops, there's grass growing along the edges next to the plastic. More weeding when I get a spare moment.) Big change from my last pics. 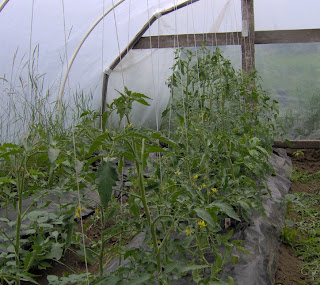 The Vermont Cranberry beans are coming along nicely. Jean's Beans are visible in the upper righthand corner of the pic. 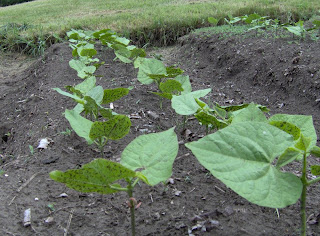 This is a volunteer potato growing in the path next to the bed where I planted basil today. We have them here and there all over the garden. (No matter how thorough we are in digging potatoes, we always miss a few...) (And considering this is the 3rd year we haven't planted potatoes, it's astounding how many we're getting...) 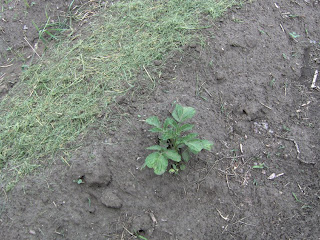 Madman got cages put on the tomatoes AnnaMarie gave us. Those little green things growing everywhere are tomatillos. I'll be weeding them out soon. 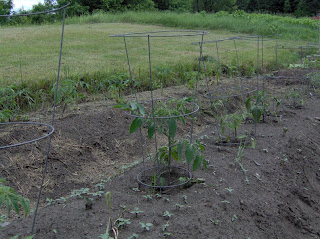 One of our hills of cucumbers. And yeah, more triffids... 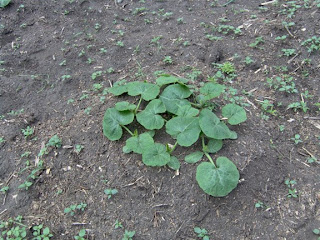 And, in flower news, and because I really really like lupines, here's a view of our lupine bed. They're especially pretty this year. 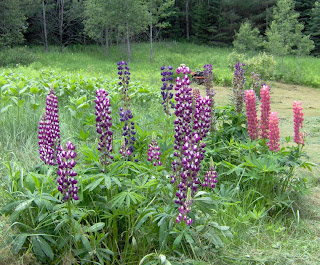 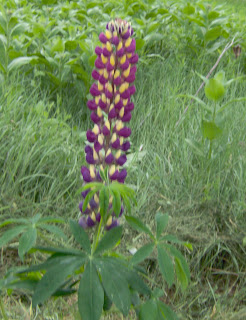 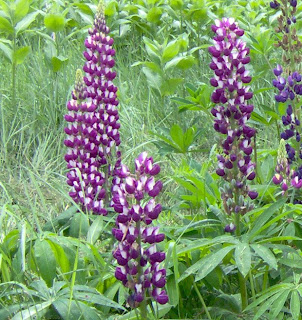 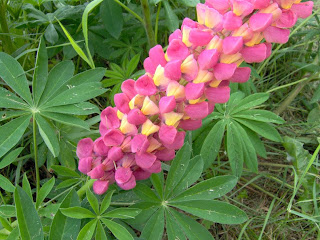 After supper tonight, I went out to sit on the deck. A ruby-throated hummingbird visited each and every flower of my (Japanese Iris? Anybody know what these are?) 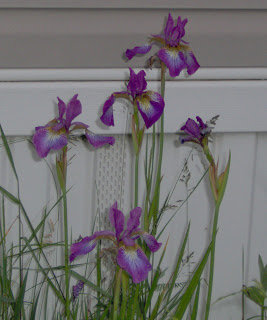 I knew I should have hunted up that hummingbird feeder...

I went inside and grabbed my camera to capture the day.

First off, we have new residents chez Mango. 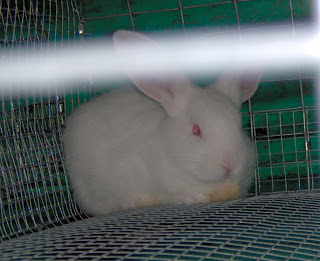 This is Stiffler. (Yeah, that Stiffler. Madman named him. Perfect.) And that white streak is the wire from the cage, caught on camera. I'm a knitter, not a photographer...) 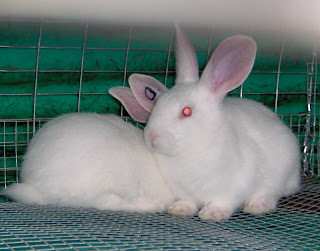 And the girls. The one whose face you can see is tentatively named Clover (my suggestion, subject to change if something better occurs) and the other one might be Jane. (Yes, Jane Doe. Madman again...)
And before you get too far into the "Ooooooo, Bunnieeeez!" mode, these are (vegetarians, avert your eyes) meat rabbits. They are our breeding stock, so we are giving them names, but their children will be referred to as "Hassenffeffer" and "Fricassee."
They are also little fertilizer factories. Rabbit poop is a wonderful addition to our gardening arsenal. It doesn't have to be composted before being added to the soil, so we can sprinkle it freely around our plants without fear of "burning" them. Yay, poop!

On the chicken front, the meat birds have been moved out to the broiler coop. (This is the prototype of an ice shanty that Madman and his brother designed and built a couple of years ago. It works equally well as a temporary chicken coop.)

Since all they do is eat and poop and knock over their waterer, it was time for them to get out of the living room. The Buff Orpingtons and Rhode Island Reds are much more polite, much smaller, and certainly less smelly, so they'll be allowed to stay inside for a bit longer.

Here's our new favorite lupine - it's a mystery where it came from, since we've only put red and white ones into this particular bed. Love the fabulous two-tone colors. Who knew pink and yellow would look so good together? 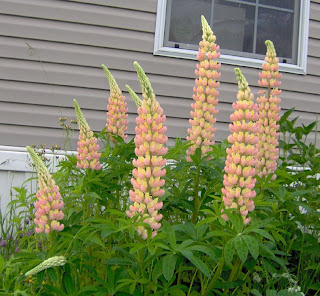 And you may have noticed some new whimmydiddles in my sidebar. It's all Cookie's fault. She caught me in an under-caffeinated condition. Before I knew what I was doing, I'd signed up for Summer of Socks. And then, in a fit of total madness, I signed up for the Tour de Fleece, as well. (Clearly, I can't be trusted with the Internet until after the second cup of coffee...)
I'm a proud member of Team Crankypants. Though I'm pretty sure I'll serve mostly as a Cranky Cheerleader (you know, giving people the raspberry and flipping them off), I thought I'd try to spin this: 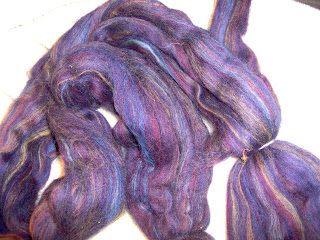 Eight ounces of gorgeous Merino I got at NH S&W. I want laceweight. I tried a couple of weeks ago, and it kicked my ass. For Tour de Fleece, I'm going to kick it's ass...

And, just for the record, the sheep are still afraid of the camera... 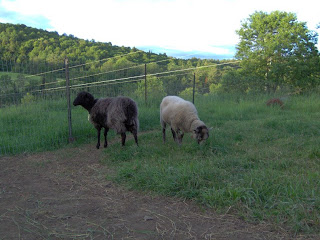 When I started this blog a little over a year ago, I intended to share the joys, the triumphs, even the pratfalls. Light and entertaining was my goal.
What I hadn't considered was sharing the sorrows.
But my heart is breaking. And most of my life is bound up in that right now. How can I say nothing about it.
As some of you know, I've been gone for most of the last week. I flew home to Kansas to say goodbye to my mother.
To say goodbye to my mother.
By the time they found the cancer that was consuming her, it was too late.
She's always been tough. She's always been ready to fight, ready to make a plan and act on it.
What she couldn't do is fight through the pain when there was no hope.
We brought her home, to be in her own place, with her loved ones around her.
Family members have been arriving and departing for the last week. Children. Grandchildren. Great-grandchildren.
She mostly sleeps. We try to make her comfortable, with pain meds and endless re-arranging of pillows. She drifts in and out. She smiles sometimes, and our hearts melt.
There is always at least one with her, holding her hand, saying "I love you." People step into the room to check on her, to talk to her, to talk to each other. We hope some part of her is listening to the love, listening to the memories. Listening as we thank her for our own lives.
She gave us all she had, so we could be who we are.
We gather on the porch, in the house, in the yard. We play "Remember the time..." We hug. We laugh and we cry.
Letting go is so hard, but we know it's cruel to try to keep her. We don't beg her not to leave us.
We just tell her we love her.
But my heart is breaking.
Posted by gayle at 8:33 PM 12 comments:

Busy day - we got the rest of the garden in, except for the rest of the tomatoes that AnnaMarie gave me. The full moon is tonight, and I don't really trust it not to frost, no matter what the weatherman is telling us. Those tomatoes will be going outside the hoophouse, and I'm just not going to take the chance of losing them.
We got the leek plants planted (they could have gone in earlier, but we got behind), plus 3 kinds of dried beans (Vt cranberry, an odd soldier bean that turned up in our cranberry beans year before last, and a new one (to us) from a friend of ours that her family has always called Jean's Bean - it looks like a form of Jacob's Cattle - very pretty bean), beets, another planting of lettuces, winter squash, and corn.
Our peas are doing well, as well as our onions (red and yellow.) Yellow and green beans are already in but not coming up yet. (And I'm still waiting for spinach, lettuce, and swiss chard. I've planted them twice already, but germination has been terrible, and they get 1/2 inch tall and stall.) 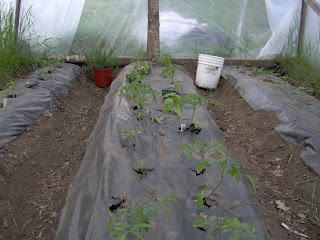 Here's a picture of the inside of the hoophouse that Madman took a few days ago. We're still getting used to the new smaller size. Not nearly room enough for all the tomatoes and peppers we like to grow. Tomatoes are in the central bed, with peppers in the beds to right and left. There's a central beam that we'll be running strings over. to support the tomatoes as they grow up.

So after all the hurry up, now it's time to wait.

And just because I haven't posted a chick-pic in a while - here's a shot of the tubs of chicks side by side. The tub on the left has our Buff Orpingtons and Rhode Island Reds, the one on the right is the Cornish Crosses. The Orps and the Cornish are the same age, but the Cornish are half-again as big as the Orps. These birds have been developed to be eating machines, and grow fast. They'll be fully grown in half the time of the others. 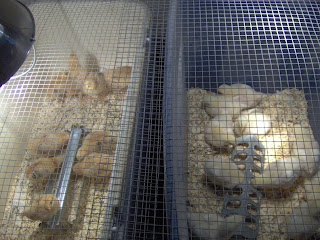 North to the border!

Today I went as far north as I've ever been... Up to visit with my good friend, AnnaMarie. (Apparently, my timing was near perfect - any sooner and I'd have had to wake them up.) She had given me directions, but the funniest thing was that I spotted the house, not by the house number or the description, but by the pea-fence that Wes had built. Ah, the power of the blog!
(Interesting sidelight - I went past a sign on the highway that announced the 45th latitude - halfway between the equator and the North Pole. Who knew? Though I would have guessed that we were closer to the North Pole than that, given our general climate...)
I had a fabulous time looking at her garden - so full of life and hope and promise. The woman is a dynamo. I can't believe all she and Wes have accomplished in the short time they've been in the house. And she gave me tomato plants, including the 2 varieties that we had lost when our hoophouse froze last month. (Debarao and Moskvich - both heirloom varieties that we have grown from seed for years, neither of which is available commercially as started plants. So when we lost ours, we were screwed. (We still have seed, since we never plant ALL our seed, just in case. But still - this year was down the tubes...) ) Many thanks, AM! There are also several varieties that we've never tried before, so I'm interested to see how they do and how they taste!
She also showed me what she'd been up to in the fiber area - and I apologize for drooling on her floor. The pictures on her blog don't come near the beauty of her batts in person. I think I may have left cheek-prints on a couple of them, and I'm sure the moaning may have frightened the dogs...
It was the best afternoon I've had in a long time. Balm for the soul.
Thanks, sweetie!
Posted by gayle at 8:37 PM 3 comments: