Seriously, I should know myself better than that...

When I pulled out the Sand Castle bin to put away the purple blocks I made over the weekend, guess what I found? 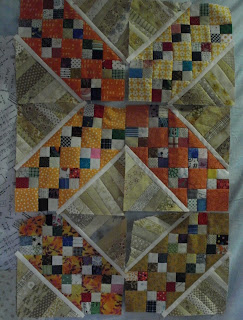 Yep, right on top.  Why on earth would I have thought orange had slipped past me?

So I made three more purples to finish off the month of September, 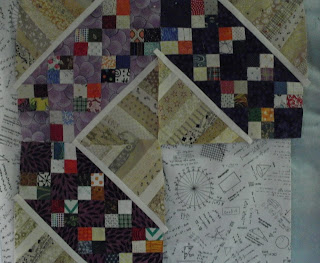 and while I was at it, I made another orange one just for luck. 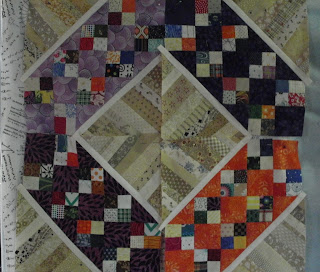 Now to catch up with the blues and pink, and decide what I'm going to be doing for October. (Yikes!  It starts tomorrow!)  I've heard rumors of using dark neutrals, etc, but I'm thinking it might be a good time to throw in some multicolor blocks.  I have a stack of Kaffe fat quarters that are starting to whisper my name...

At last, some purple Sand Castles! 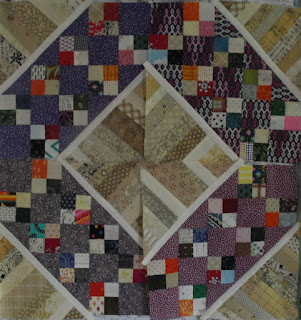 (I wish purple was easier to photograph.  Sigh...)

I'd been trying to make a big stack of blocks in colors that I'd fallen behind with over the summer, then realized that September is almost over and I'd better get with the purple.  There are three more purple blocks cut out and waiting in the bullpen, along with a bunch of blues.  (I managed to skip over both the light and the dark shades of blue)  I still need to dig out my oranges and cut some bits for blocks - how could I have let orange slide by? 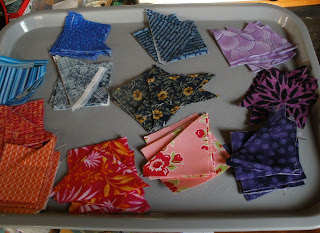 Earlier this year I'd kitted up a bunch of blocks for Glitter, so I pulled out some of them just to break up the Sand Castles a bit. 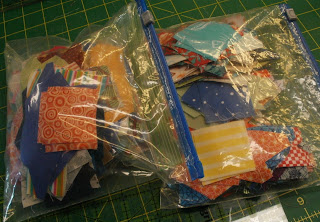 They're a bit too fiddly for leaders/enders, but it's amazing what you can accumulate when the pieces are just lying there next to the machine. 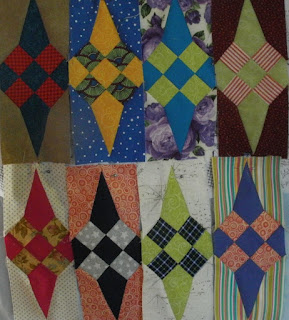 They'll go into their bin with the rest of their Glittery siblings.  Good thing I'm not in a hurry for this quilt - it's more of a marathon project than a sprint.  Those y-seams really slow a person down somehow...

Linking with SoScrappy for ScrapHappy Saturday and with Quilting is more fun than Housework for Oh Scrap!  Come see all the scrappy fun!

A summer's worth of geese all aflutter

Here's my design wall, after a concerted effort to do some catching up. 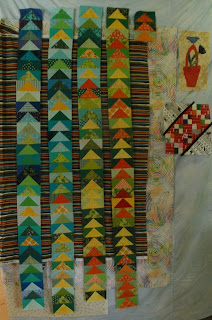 That's a whole summer of geese - May through August - for my temperature quilt, all done up and sassy.  There are even three geese for the first three days of September at upper right.

I've got a tray full of pieces cut out for the missing RSC summer colors, 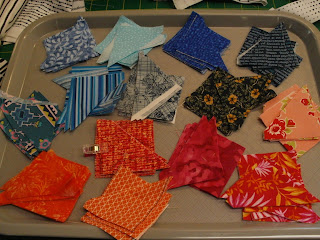 and I managed to get a few blocks sewn up as far as the lozenge section.  They'll just need their scrappy triangles sewn onto the corners to be ready to join the other blocks in their plastic tub. 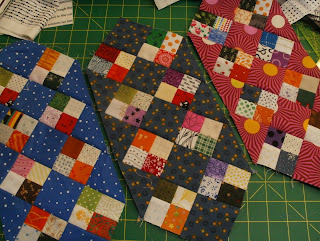 But wait - what happens if I pull back a little on that last photo? 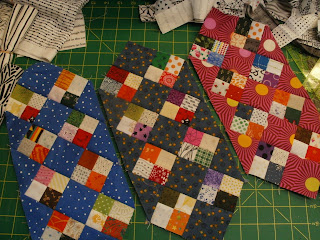 What are all those black on white prints doing on my cutting table? 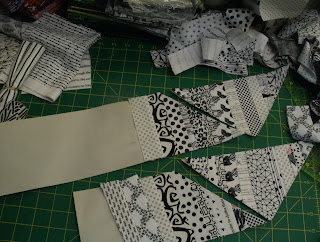 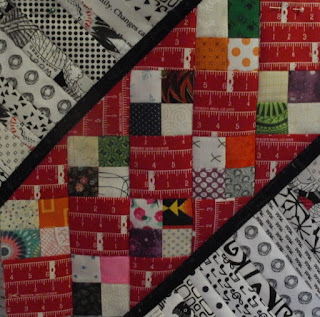 Because of course I want to make TWO Sand Castle quilts...


Linking with SoScrappy for ScrapHappy Saturday and Quilting is more fun than Housework for Oh Scrap!  I've been missing those linkups!

Dusting off the blog

That was an unplanned hiatus.  I spent the summer lost in a combination of grief and inertia.
I lost my dad in early June.  May had been a nightmare month as his health plummeted, with trips to the ER and tests and more tests.   He'd been fighting a long battle against a degenerative muscle disease and it finally won.
I can't say enough good things about hospice - I literally don't know how we could have gotten through it without them.  So much help and comfort at a time when we really needed it.  Letting go was so hard, and they held our hands through it all.
Getting back into any kind of creative groove took a long time, and it's taken even longer to get to the point where I feel like talking again.
So, here I am, talking again.  Hello.

One thing I did do is get the quilting done on my granddaughter's Storm at Sea quilt, which I've been calling Sea of Tranquility. 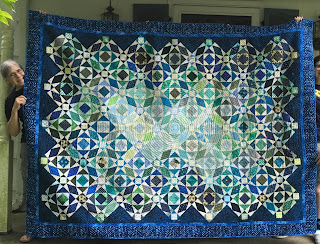 (She's holding the other end of the quilt, but I cropped her out of the picture since I didn't ask her for permission to show her face.)
As you can see, I went ahead with my crazy plan to quilt it in a big spiral.  The beginning was a certified pain in the butt, but it was just the kind of simple mindless process that my frazzled self needed.  And I love the effect it gives of ripples moving out from the center, echoing the light to dark transition that I'd worked in the values of the blues and greens.

Big project, big quilt, done.  One positive to put up against the negative.
We just keep going.