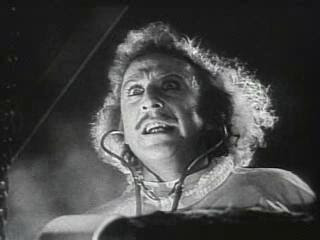 One morning, shortly after we got the last batch of meatbirds, Madman came in from morning chores and asked, "Have you noticed one of the chicks has a weird crooked neck?"
"Oh, yeah," I answered. "I've been calling him Igor..." 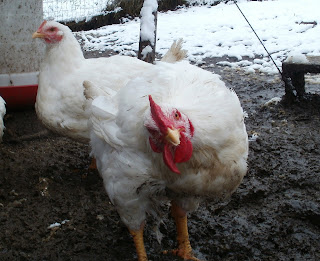 Meet Igor, all grown up. Still looking at the world sideways (and slightly-from-the-right.) 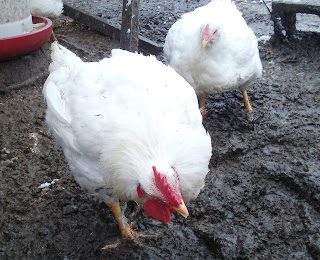 At least he seldom trips over things...
Posted by gayle at 5:10 PM 4 comments:

Orion was a little puzzled this morning. 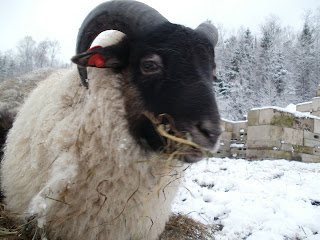 But I distracted him with hay, and that made it all better. 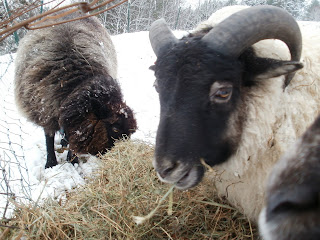 It's been a week since any of the pullets have gotten out of their pen!
(Stupid chickens...)
Posted by gayle at 10:19 PM 9 comments:

Just a few more words on the Vt Sheep & Wool Festival and then I'll hush about it until next year.
First, I did buy yarn - just one skein in a fabulous color, with a stealth project in mind. (So, no sharing. Sorry.)
And I have to keep laughing to myself about our ram purchase. The very nice man (from Indiana) who sold Orion to us offered to help us load the sheep in our trailer. Then he looked around, saw our car, but realized there was no trailer. The look on his face as we said, "Oh, no, we'll just put him in the back of the car. That's how we always haul sheep." was priceless. I can just imagine him returning to Indiana and telling everyone out there about crazy Vermonters who drive around with sheep in their cars...
And lastly, to the anonymous woman who handed me toilet paper under the stall door - a Thousand Blessings on you and your house.
Posted by gayle at 8:43 PM 6 comments:

I knew y'all wanted a few more sheep pictures, so I headed out with my camera yesterday. But the sheep were way too interested in what I was doing, so I kept getting pictures like this: 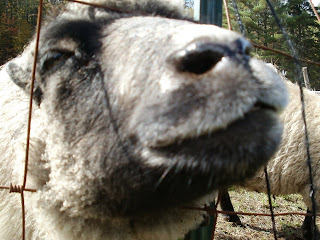 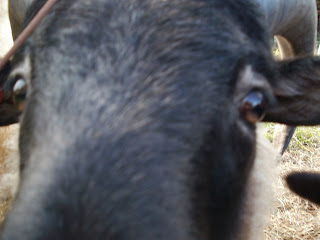 (Well, you did want a closeup of Orion, right?)

Or, I'd get a nice shot lined up, and suddenly there'd be a sheep butt in it... 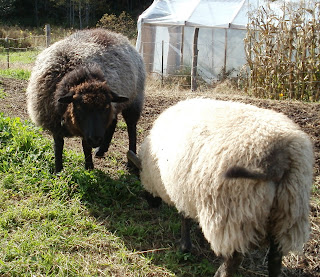 (Notice how gray Onyx's back and sides are since her shearing. After a bit of research, and talking to some Shetland raisers at Vt S&W, we think this means she's a shaela (here's a link that talks about the shaela color) though she might be an iset. (Which is actually a marking rather than a color. Shetland colors and markings are confusing...)

Anyway, today I got smarter - I pitched some hay into their paddock first, so they'd have something more interesting than me to hold their attention. 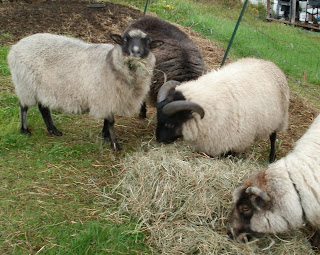 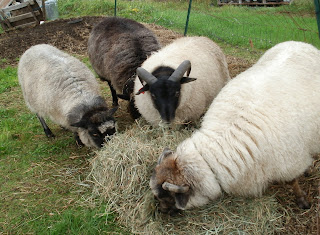 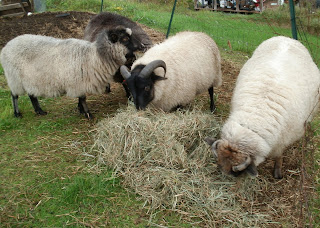 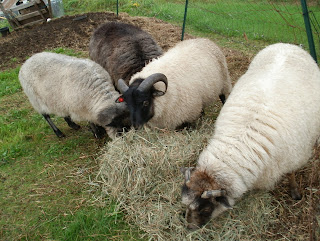 In all those photos, from left to right we have Goldie, Onyx, Orion, and Merlin. (Notice that Onyx never once raised her head out of the hay. Great powers of concentration, our girl, especially when it comes to food...)
You can see how much bigger Orion's horns are than Merlin's. (And someday, Orion's will look like this. He's only 6 months old, so he's got a heap of growing yet to do.) Merlin was wethered at a young age because his horns were turning in, toward his skull, rather than out like they're supposed to.)
This photo shows what I'm talking about: 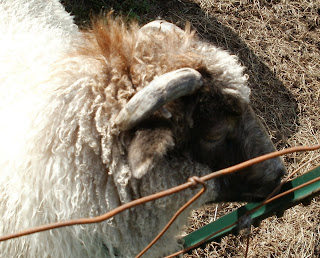 We had to have the tips of his horns cut off at shearing time because they were almost to the point of touching his skull. Because he's gelded, his horns grow slowly, but they do still grow. We can keep trimming them for awhile, but we can't go too far up, because there are blood vessels involved in the horns (it's actually a cooling mechanism) and cutting into that part would be purely ghastly and horrible. (It's the kind of thing best left to a vet.) In the meantime, we keep a close eye on them. (If only there were orthodontic devices for horns...)
Posted by gayle at 7:14 PM 8 comments:

Well, it did rain. And we did slog through mud. And more mud. And even more mud, since it rained all day yesterday, too.

Figured it out yet?

Meet the newest member of the Mangofeet Menagerie: 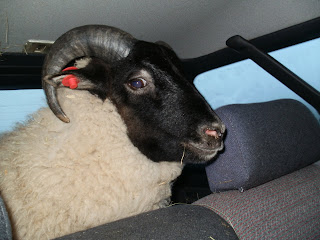 This is Orion, a registered Shetland ram.
He's a sweetheart - took the ride home like a trooper (though he blatted less once the windows fogged up and he couldn't see outside. I don't think he'd ever been for a ride in a Subaru before...) and has started to settle in with the other sheep.
Notice how everyone's eyes lit up when they saw each other: 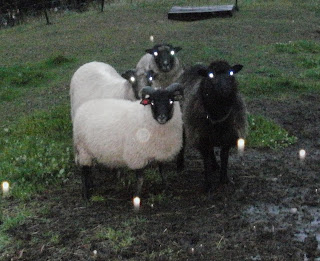 Actually, I had to give up on the picture taking. It was dusk by the time we got home, and pouring down rain, to boot. Most of the pictures were blurry, had glowing eyes, or both.
I did get one good one: 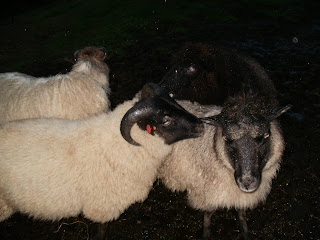 Notice how Orion is already chatting up the lovely Miss Goldie. We have high hopes for lambs this spring...
Posted by gayle at 8:57 PM 13 comments: