First it rained, then it rained some more. Yep, it was Vermont Sheep and Wool...

It's now officially traditional that it rains for the entire Vermont Sheep and Wool Festival.  Tunbridge turns into a quagmire; vendors, exhibitors, and attendees shiver in the damp cold; umbrellas and raincoats drip everywhere.  But that just makes it perfect for wrapping up in wool, which is the whole point of the festival, right?
The only ones whose enthusiasm was utterly undampened (sorry.  you know how I am) were the sheepdogs who were there to show off their herding skills.  They watched their boss intently, waiting for the go-ahead signal.  You could just hear them thinking "Is it my turn yet?  Is it my turn yet? Now?  How about now?  Is it my turn yet?  I'm ready!  Ready ready ready ready!  Is it my turn yet?"  I wish I loved my job that much...
My youngest daughter and I attended together, as we usually do.  And while we saw all sorts of wonderful things (yarn!  roving!  spindles!  sweaters!  shawls! fuzzy critters!), I only managed to take one picture: 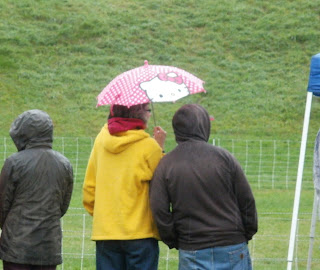 Because the sight of these two folks sharing a tiny little Hello Kitty umbrella was just too cute to pass up.

Yesterday was the second Jury Draw (of the three that I have to endure to meet my civic duty this year) and I spent 8 hours sitting on a hard wooden bench with only a thin cushion (very thin.  Like 1/2 inch thin.  Thin.) to protect my bony little butt.*
The good news is that I got the cuff of a sock knit.  The bad news is that I'll probably have to rip it out.  While I like a little negative ease in my socks, this one is turning out a little too negative-easish.  Like somewhere between tourniquet and Chinese footbinding.  I'm not even going to bother taking a photo, since I'm going to rip it.  So the good news 2 is that I'll be able to knit it over, and it's good that I have knitting to look forward to because the bad news 2 is that we didn't finish picking a jury and have to go back next Thursday to continue the whole longwinded boring process.
*sigh*


*  My theory is that they don't want us to get too comfortable and fall asleep from boredom.  Which I did anyway.  I seem to be making a habit of sleeping in the courtroom.  Maybe I should point this out if they try to select me for a jury.  I'm sure it wouldn't look good if the bailiff had to keep poking me to wake me up.

Hey! What happened to August?!?

And how did it get to be September already...

So, what have I got to show for the summer?

Here's the sum total of the knitting I got done: 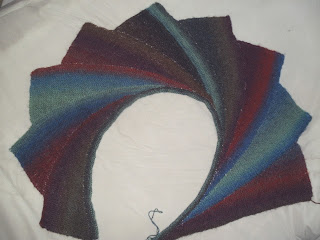 Wingspan.  (This is the best of a bunch of really bad pictures.  I can't get the colors right and the focus defeats me.)  I love this project.  Though if you count over to the fourth and fifth wedges, starting from the right, you'll see that the color sequence went south.  Minutes after I posted about how the colors were transitioning perfectly for the pattern, I hit a knot in the yarn.  *sigh*

The garden pretty well went south this summer too.  What with the sheep getting out and eating most of it, there's not much left but swiss chard and green beans.  And the tomatoes are being eaten nearly to the ground by a sudden infestation of hornworms, which we've never had before in all our years of gardening up here.  Growing up in Kansas and upstate NY, I was familiar with them, but Madman was all "WTF?!?" because he'd never seen one before.  Picture a caterpillar the size of your middle finger, chomping on your tomato plants and pooping the equivalent of elephant droppings.  The only good thing about them is that they explode rather spectacularly when you stomp on them.  (Just be careful not to point them at anyone, as they go off like a cannon.)

One of the few bright spots is that my lovely Black Austrolorps have started laying eggs.  (*sniff*  They grow up so fast...)  They've now been moved in with the main laying flock, though they spend most of their time next to the fence between poultry pens, gazing at their beloved turkeys.  The turkeys are also now spending all their time pressed up against the other side of the fence, gazing right back at their little chicken friends.  And this morning, Madman found the hen turkey in with the layer flock - she must have climbed the fence since she's now too fat to fly.  We foresee trouble, but the turkeys' days are numbered (because Thanksgiving.  And possibly Christmas.  You know.  Don't tell them.) so it will all work out in the end.   Because it would be just great if something on this little farmlet would just stay where it's supposed to.

But I'm not holding my breath...