ETA:  I was originally going to close the contest on March 3rd, but I'm getting late entries and interest, so I'm reconsidering and keeping it open till March 15th.  Good luck, all!
Way back in October, when we bought Orion, we had a plan.  Ram lambs hit sexual maturity at roughly 6 months of age, give or take.  By buying a young fella and turning him in with the girls in October, we should get lambs sometime in late winter or early spring - definitely preferable to the January/February lambings I grew up with.  Those months are brutal up here, even for us humans.
So, we bought our little Orion, who was born in early April of 2011.  Perfect.  That put him at exactly 6 months old when we brought him home.
We just did the math the other night - with a gestation period of roughly 5 months, we're looking at March 1st as the earliest possible date for lambies.
And, hey!  We just realized that March 1st is coming right up!
So LambWatch 2012 is beginning.  Since we haven't sheared yet, the girls are too fluffy to tell by looking at them if they're in the family way.  And any efforts to feel around to see if their udders are swelling are met with a sudden jump away and a look of "Hey!  That's really rude, ya know!"  So we truly have no idea where we stand in the scheme of things.
So I decided, why not have some fun?
I'm going to throw a contest - Guess the lambie birthdays and win a fabulous prize.  Well, there'll be two prizes, since we have two potential mommies.
It didn't take me long to come up with prizes, either.  One of the nice things about being a knitter is that people who love you tend to buy you knitting books.  And sometimes more than one person finds you the perfect knitting book.  So I've got a couple of duplicates, and I figured I'd share the wealth.

Prize A:  Selbuvotter  by Terri Shea
Prize B:  Folk Bags  by Vicki Square

Ram lambs (supposedly) reach sexual maturity at 6 months.  Roughly.  The complicating factor is that Shetlands are very private about their hanky-panky and only do things when no one is looking.  So we have no idea what, if anything, he might have gotten up to.
These pictures of Orion were taken today.  Does he look like a Big Boy to you? 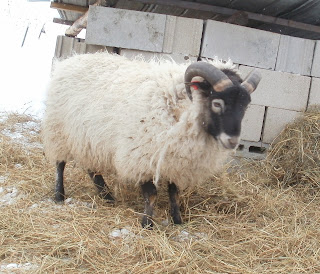 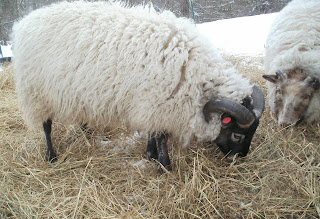 (That's Merlin on the right.  He's definitely not pregnant.  Don't guess for him.)

And here are the girls: 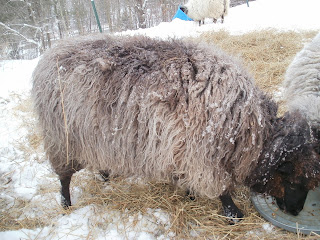 Onyx, our formerly black ewe.  She's two, about to turn three.  She's never had a lamb before.  We don't know if she would even accept Orion's advances if he made them.  She could very well have slapped his face and said "What the hell do you think you're doing!?!" 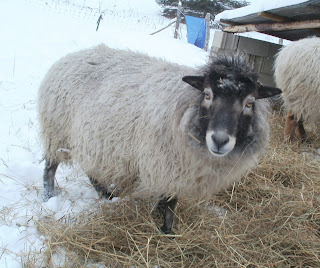 And here's a picture of Onyx's butt, so you can see what I mean about not being able to tell by looking.  Is it fluff?  Is it lamb?  Is it too much hay? 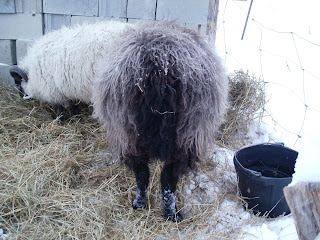 Pick a date, any date.  Actually, pick 2 dates - one for Goldie and one for Onyx.  The earliest possible date is roughly March 1st.  If you think Orion got right down to business, guess early.  If you think his maturity is tied to his intelligence (Honestly, he's cute, but dumber than a box of rocks.  Sort of like the Barbie doll of rams.)  you should guess later.  (Dumb.  We might be talking August...)
State your dates in the comments of this post and this post only.   Don't email me with a guess, it won't count.   This post only.   Each person gets one guess for each sheep.
Check the dates that other people have guessed.  Once a date has been claimed, that person owns that date for that sheep.  (Example:  Someone guesses Onyx March 10.  That date would be closed for Onyx.  You could still guess Goldie for March 10, but only if no one else has already taken Goldie for that date.)  I'll try to stay on top of things and keep a running list at the end of this post, to make it easier to keep track of which dates are already taken.
The winner will be the one who comes closest to the correct date.  The date will be determined by when we get up in the morning and say "Hey!  There's a lamb out there!"
In the event of a tie (ie:  the lamb is born smack dab between two people's guesses), I'll flip a coin or something - the winner will get the book and the other person will get some other fabulous prize that I'm sure I'll think of any minute now.
First winner gets first choice of the books, second winner gets the other book.
I'll close the entries at midnight of March 3rd.  Or when the first lamb is born, whichever comes first.

If you have any questions, please ask in the comments, or feel free to email me.

So, go out and tell all your friends.  If there's enough interest, maybe I'll do this every year...

I absolutely cannot get a good photo of Onyx's fleece.  I've been carding some up, and I really want to show it off, but every photo comes out looking like crap.  It's the most beautiful black/gray fluff you'll never see - so light and airy that I'm afraid it'll float away.

And apparently it's so fluffy that the camera can't focus on it. 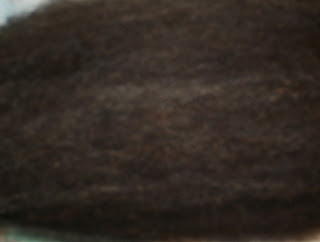 Can't talk now, turning the heel on the second sock

And trying to remember to take pictures as I go.
I found my notes from Sock 1 were a little sketchy in places as I worked on Sock 2.  Like exactly how I turned the heel.  Whatever I did the first time, it worked perfectly.

Sure wish I had written it down... 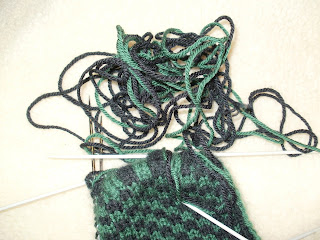 A friend just sent me this video.

I'm still laughing.
I wonder if we could train our rabbit to do this...
Posted by gayle at 6:13 PM 3 comments:

If you're ever on a game show and the million dollar question is "Is it a good idea to make a plying ball with merino/angora/silk laceweight singles?", you can confidently answer:


You can buy me some fiber out of your winnings as a thank you.
Just maybe not merino/angora/silk...
Posted by gayle at 8:27 AM 3 comments: