Happy Ho Ho to one and all!

I don't remember buying any gargoyles...

On my way out to do chores tonight, I glanced over at the chicken coop, then ran back inside for the camera.
Because this: 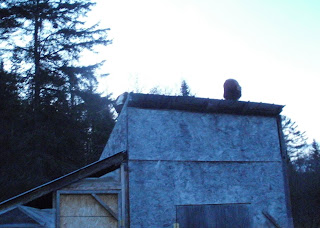 The chicken coop roof doesn't have lumps.  Or gargoyles.  Though apparently, it does have turkeys.

Getting a little closer: 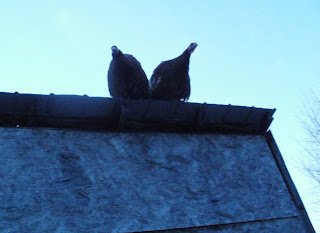 "Hey!  You birds get down from there!  Go back inside!" 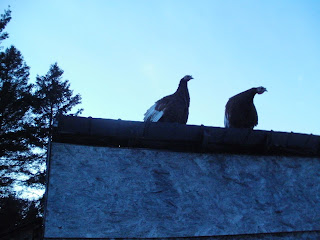 You can see how well they mind...

I remember saying recently that I liked raising turkeys.  Oh, yeah - right here.  What was I thinking?

And me without my camera...

Sorry, y'all.  Because it would have made a great picture.

I was on evening chores tonight, since Madman did them this morning.  Everything went smoothly, especially considering it was snowing hard, with high winds.  (It was raining when I left for work this morning, then the temperature plummeted and it was snowing when I was coming home.  Because it's Vermont, and that's how we do things up here.)
Smoothly, that is, until I got to the chickens.  I filled their feeder, then was excited when I found two eggs in the nest boxes.  (We've only been getting one egg lately, so two was just great!)  I held them in my left hand while I checked the waterer.
Madman had given them a full one this morning, but hadn't pulled the other one, so both waterers were in the coop.  Since we'd need one for the morning, and there was no sense leaving both of them to freeze overnight, I decided to grab the one that was sitting on the roost and head for the house.
Unfortunately, there was a sleeping turkey perched on top of it.  Now, in hindsight, I probably should have grabbed hold of the turkey with both hands and set her on the roost, then picked up the waterer.  But I had one hand full of eggs, so I just reached up and tried to nudge the turkey off with my right forearm, figuring she would just step back onto the roost.
Wrong.
I've mentioned that turkeys are pretty mellow.  Just 'everything's hunky-dory' sort of critters.  But apparently that's not the case when you wake them up out of a sound sleep, while wearing a headlamp that's shining brightly in their eyes, and start pushing them off their perch.  She went just the other side of bonkers and jumped up onto my forearm, while flapping wildly.  It was sort of like having a falcon on your arm, if the falcon weighed 15 pounds with a 4-foot wingspan and was having hysterics.  She kept whacking me on the head and shoulder with her wings and wouldn't Just. Let. Go.  I was trying to encourage her to step off onto the roost, but she wasn't having any of that.  It was somewhere along this point that I put my thumb through one of the eggs.
So now I've got an hysterical flapping turkey on one hand, and a dripping mess of busted egg in the other.

And me without my camera...

Labels: only me, turkeys

Slippery is the word of the day...

On the bright side, the turkeys have speeded up chore-doing by moving themselves in with the chickens.  We've given up trying to keep them in their own pen, and accepted the one-less-set-of-waterers-and-feeders-to-fill-in-the-wintertime as a plus.
We were a little worried how the birds would take to each other, given the size and species differences.  The turkeys (bless their gentle little hearts) are very happy.  But then, turkeys seem to be generally happy with whatever is going on.  They stand amongst the chickens saying "You are like us!"  (I picture their voices as sounding like the chirpy tones of the average four-year-old.  I'm a great anthropomorphizer...)  The chickens, meanwhile, don't seem to be unhappy, but they tend to stare up at the turkeys while thinking "You are not like us..."
So far, so good.  It's funny seeing them all on the roost at night, little chickens cuddled up to big turkeys, like kids asking for one more bedtime story.