Maybe I need a minder...

I've discovered something about laying out Burgoyne Surrounded blocks.

It makes me want to make more.

I grabbed my rotary cutter and some nearby fabric. 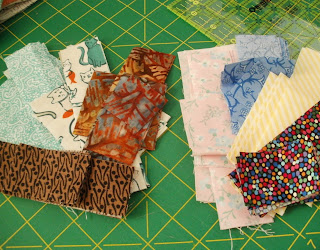 By late afternoon, I had one of those two almost completely stitched together. 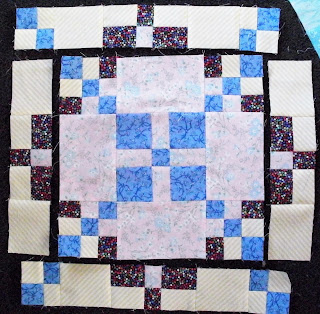 Looks like it's going to be a bigger quilt than I thought.

Or maybe the first of two?

Scrappy is as scrappy does

In non-rainbow news, I'm still puttering with a couple of works in progress.

On Ringo Lake is serving as my leader/ender for the moment. 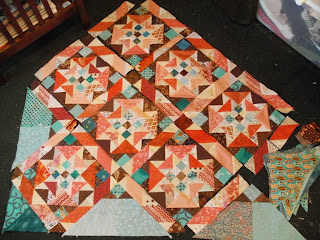 This means that components for it are stacking up, with the occasional finished block, but it also means no progress is being made on my real leader/ender projects - like the 4-patches I've been making for years, or the hourglasses I started year before last, or the checkerboard rails that I started last summer.
(Hmm...  I seem to have a whole lot of leader/endering going on.  I should probably make a push on one or the other of these projects, but in that case I'd probably just start another leader/ender to work on while I finish those blocks, so maybe I should just leave it alone and see what happens...)

One of the things I want to really move along is my Burgoyne Surrounded quilt.  I've started laying out blocks with sashings and cornerstones, but I have to work on it in short bursts.  Despite the carpet on my design floor, there's only so much these bony old knees can take before they start getting grumpy.  Grumpy knees are not easily placated. 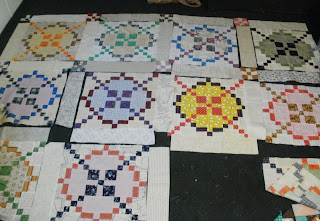 Me and my grumpy knees are headed over to Cynthia's Quilting is more Fun than Housework for some Oh Scrap fun.  Come on along and see what everyone's up to!

January has been a bit more interesting a month than I could have wanted, but here we all are.  I finally managed to squeeze in a sewing day, hoping to get a bit of light blue rainbow sewing done, since this is the last Saturday of the month. 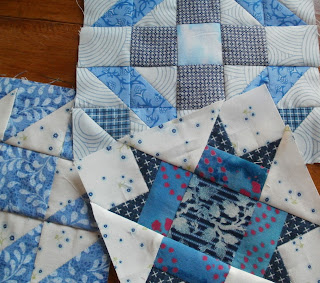 First up, the old blocks, starting with Centennial Star.  It had been so long since I'd made one of these that I had to pull the instruction sheet out and have a look.  (Luckily, I had tucked it into the Centennial bin with the finished star blocks.) 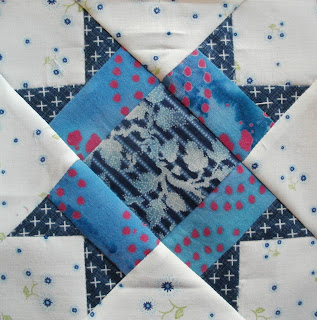 Each time I make one of these, I'm reminded how much I love them, but I seem to forget in the interim between blocks.  This one makes number twenty-two, so I still need lots for a quilt.  I think I first started making them last year, so they're only a once-rolled-over RSC project.

My Jacks blocks, on the other hand, are twice-rolled-over.   I started them in 2016, continued last year, and will keep right on chugging this year. 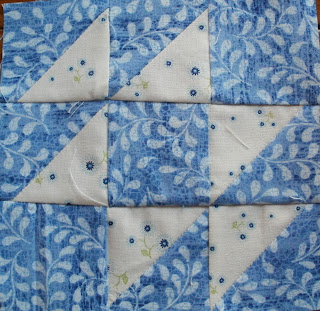 I counted these blocks, too, and found that I only have twenty.  Since they, like the Centennial stars, are only 6" blocks, I can make lots and lots more.

And, because I hadn't started a new project yet this week, I made one block for the RSC Squared Away SAL.   (The background isn't quite as blue as the photo makes it look, btw.  My camera insisted that the bluer the better, and I couldn't convince it otherwise...) 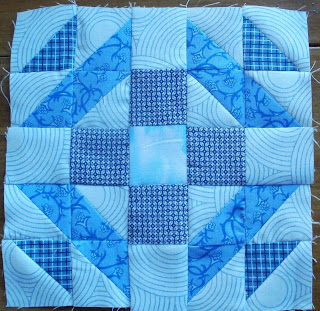 I'm not committing to Squared Away as a full-tilt project, but I enjoyed making this little blue beauty, so I'm in until I'm not.  This is the middle size of the three options offered.  I almost went for the 5" size (and might yet anyway), but I have tons of 2" strips and squares on hand, so this size seemed an easy way to go.

So, since I finally have some rainbow scrap news to report, I'm linking with Angela at SoScrappy for ScrapHappy Saturday.  Come see all the rainbow fun!

Putt-putting along on Ringo Lake

Progress is slow but steady - 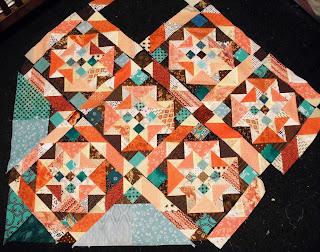 Meanwhile, on another part of the design floor - 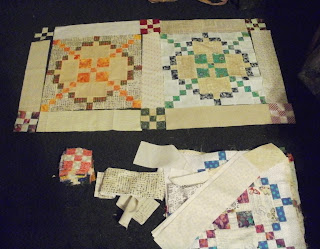 I think I'm going to have to take up Ringo so I have room to lay out Burgoyne, since I'm giving a higher priority to Burgoyne and I'm not going to be able to make the design floor any bigger...

While I was playing around with the construction of that block I showed yesterday (before it dawned on me why it was kicking my butt),  I thought that center area could be interesting all by itself. 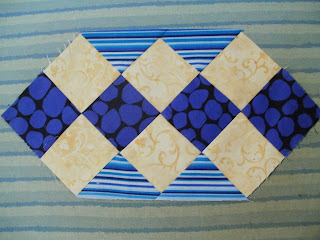 Or possibly a sashing or border?

More play is definitely called for.

Linking with Quilting is more fun than Housework for Oh Scrap!  Come see all the pretties!  (Oh, and Cynthia's flashing a Burgoyne block, too!  Woohoo!)

Of course I'm not starting a new RSC project!

You believe that, right?  Right?
*sigh*
Yeah.  I started another RSC project, despite the fact that I'm rolling over all of last year's projects.  (Some of which were rolled over from the year before, but we're not going to talk about that right now.)  (Or maybe ever...)
See, I spotted this really cool pattern and couldn't resist taking it for a test drive. 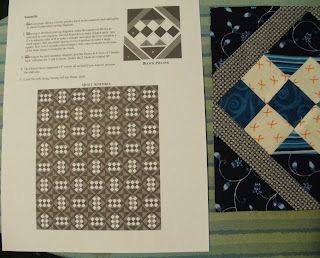 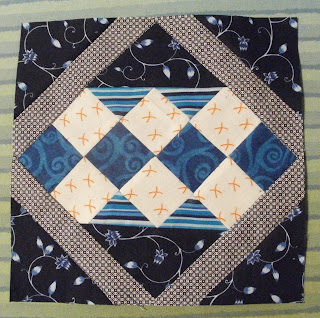 That was actually the second attempt at the test drive.  There was rather a bumpy start.
See the partial block on the left in the photo below? 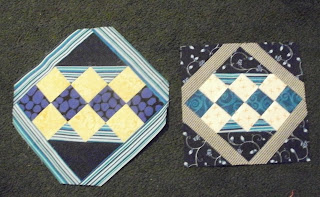 I'd cut all the pieces according to the directions, but when I started assembling them, nothing was fitting.  I kept recutting, sewing, then discovering I had to recut for the next section as well.  Even I get suspicious after a certain point.
I finally figured out the problem. 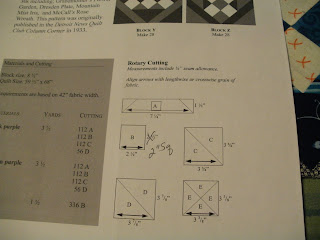 Those squares that are the starting point for the block?  The directions say to cut them at 2.5", which clearly wasn't working - as soon as I cut them at 2" instead, everything fit together nicely.  And I ended up with the size block I wanted, too, for the bonus.
I made the test block last month, but luckily it's in blues, so I can totally count January as covered.  Unless, of course, I get tired of sewing On Ringo Lake and Burgoyne Surrounded and need a palate cleanser.
And there are all those other bins of RSC blocks that I should probably check.  It's a pretty good bet that I could use a few more blues.

Linking with SoScrappy for ScrapHappy Saturday.  Come see all the rainbow fun!

Finally a sewing day, and I spent it at Ringo Lake

Today was warm enough that I finally felt like venturing out to go to my studio.  (Yay for double-digit temperatures!)  (Well, double-digit in the positive range, anyway, as opposed to the negative.)  (Tired of those double negatives, I tell ya!)
Bonnie's rapid-fire release of clues at the end of the year caught me completely flat-footed.  I still have a lot of components to sew, but I got a block sewn together today, and laid out the corner to see how it was going to work. 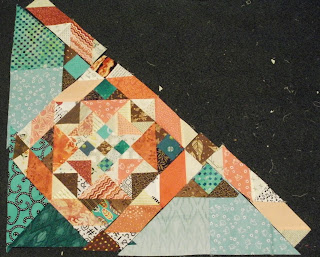 I've been admiring everyone's efforts at the last linky party at Bonnie's house.
Some people already have completed tops, or even completed quilts.
I have a block.
I'm going to need another sewing day...