I've got the yellows a little better than they were, but still need to fuss some more arranging these blocks.  (They're showing up way brighter in the photos than they are in real life.)  There's no reason to rush this process, so I'll just keep playing with blocks until I get tired of it, then I'll say 'fiddlesticks!' (or words to that effect) and just sew them together. 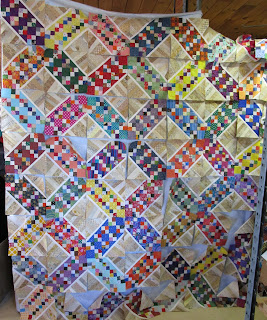 Though now I've got an empty bin. 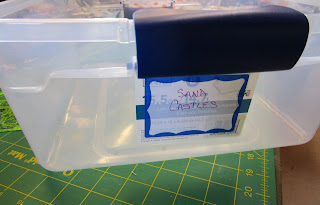 Whatever shall I do?


Linking with SoScrappy for ScrapHappy Saturday with my Sand Castles from last year's RSC, and with Quilting is more fun than Housework for Oh Scrap!  Come join the fun!

My Sand Castle runneth over

I have exceeded design wall capacity... 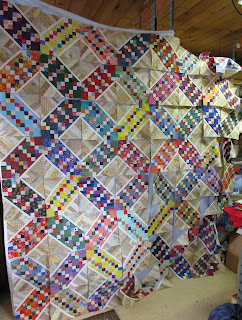 All my Sand Castle blocks are now trimmed and up on the design wall, though that wall, which seems really big when it's empty, has been overrun.  The blocks on that raggedy right-hand edge are hanging on for dear life, pinned to each other and air.

For now, the goal was to get them up and oriented, without worrying too much about what-goes-where.  I'll be spending some quality time this weekend, arranging and rearranging until I'm happy with the color/value distribution.  I can already see that I'll be wrangling some yellows right away.

The fun thing about all those blocks is that they should have measured 10.5" after squaring up, but all but two of them wanted to come out to a smidge under 10 3/8" instead.  Of course, the first one I trimmed was the correct size, and the second one was an "oh no!" as it came up short.  I set it aside, grabbed a third one - and came up short again. And again.  And again.
"Alrighty then," I said to myself.  "The only thing that matters is that they're the SAME size, not some imaginary 'correct' size."
(I was proud of myself for being calm and practical instead of freaking out)  (Even if I'm talking to myself out loud an awful lot these days)  (I'm sure it'll be fine)

In other news, I've got a back done for the Temperature quilt. 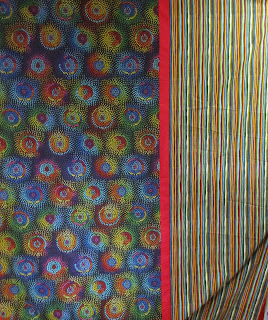 Though I may run a strip of that stripe down the left edge as well, just for fun.  There's still time to decide, as I psych myself up to get it basted.

Cue the huzzahs - we have a flimsy!

The upper right corner is flopped over backwards because the thing is too big for my design wall... 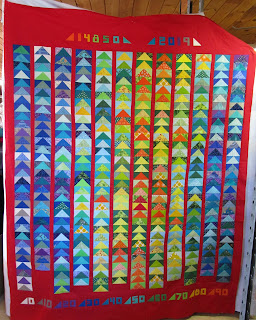 When I started it, I really thought I was making a nice wallhanging.  This behemoth clocks in at 64x82, so more bed quilt than wallhanging.

This is what happens when I start a project with more enthusiasm than math.

Now I just have to get a back made for it and I can start the quilting.  (I gave myself the rest of the day off to celebrate, though.  Plenty of time to get to the backing tomorrow.)

In the meantime, I pieced this little cutie as a leader/ender while I was attaching those border strips. 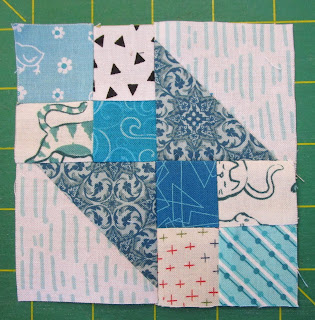 Not much to show for the RSC, but at least I'm not empty-handed!  (And yes, those are cat butts in that block.  What's a good buckeye without a cat butt or two?)

Linking with SoScrappy for ScrapHappy Saturday and with Quilting is more fun than Housework for Oh Scrap!  Come see all the turquoise/aqua/teal fun!

Building Castles in the Air

Or rather, building castles in the sand.  In between the endless triangles for the Frolic borders, 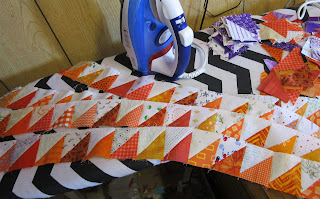 I managed to make the final push for Sand Castles.

Allow me to introduce Block 63 and Block 64: 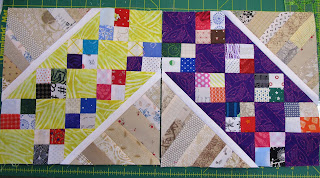 I've started squaring up the blocks (the triangle corners are made oversized to allow for any wonkiness in the stringiness) and as soon as my temperature quilt is off the design wall, I'll be starting the grand dithering process of their final arrangement.

And speaking of the temperature quilt, I have a plan: 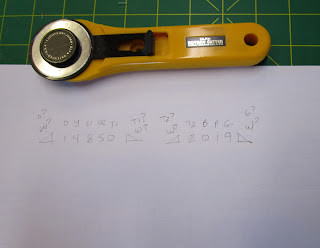 Notice the extensive calculations and attention to detail!  This is obviously going to work!  (Because we all know my plans always work, right?)  (Wish me luck!)

Linking with Quilting is more fun than Housework for Oh Scrap!  Come see all the scrappy goodness!

I dug into the mound of triangles left over from making all those flying geese and pulled out a bunch of aqua ones.  A few quick seams and I had three more doodads. 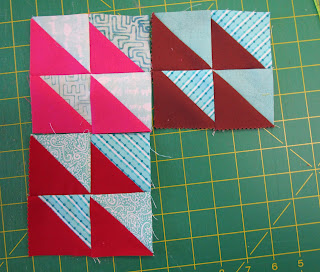 I've still got a great plenty of turquoise/aqua/teal triangles, so these won't be the last for the month.

One of my goals this spring is to finish Sand Castles, which was my RSC quilt for last year.  (Well, maybe finish the Sand Castles top anyway.)  (Let's be realistic here)
When last I looked, I still needed two more blocks.  (Unless I've miscounted)  (Again)  Here's the penultimate block almost done. 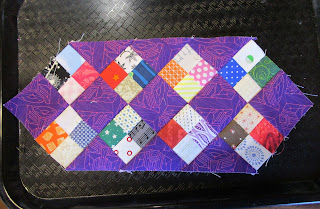 I'll liberate the strippy corners from their papers and finish the block next time I sew. 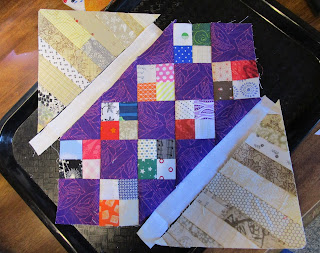 One more to go!   (But maybe I'd better pull out the Sand Castles bin and count up the blocks before I get too excited...)


Linking with SoScrappy for ScrapHappy Saturday.  Come see all the rainbow fun!

Apparently I'm writing blog posts in my dreams but not in real life again, because I was sure I'd posted some of these pics with an update on my temperature quilt progress.

When last I'd made a non-imaginary post, I had most of my numbers together for running a legend across the bottom of the quilt, indicating which color stood for which temperature.

I finally got them all done and was quite pleased with how they were going to look. 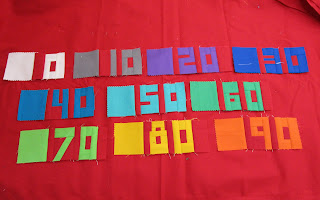 But then I had A Better Idea.
With all those angles in the flying geese blocks, those squares ended up looking chunky and clumsy.  So I grabbed some background squares and did some quick flippy corners. 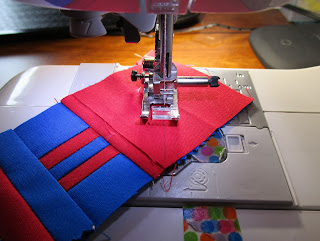 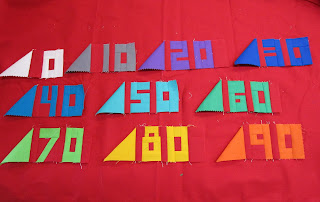 I sewed them together into a strip, then hung up some red background fabric along the bottom of the design wall, hung up the main body of the quilt, and centered the strip of numbers below, just to see how it would look. 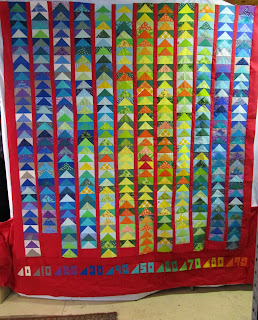 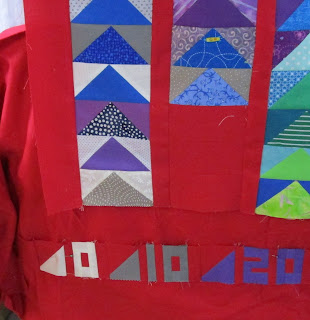 I really wanted the strip of numbers to be the same width as the columns of geese, and in my head it was going to work.  But here's a clear example of how estimates can differ from reality.

I spent a quality afternoon with my friend Jack the Ripper and started taking out seams so I could cheat out some of that width.  Slivering a quarter inch here and an eighth inch there can all add up. 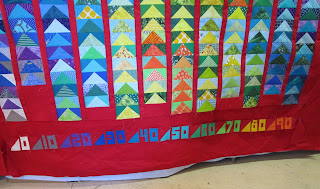 There.  The bottom is done.  I still have to cut strips and sew the whole border together, but at least now it's going to fit.