I'd wanted to try out my new yarn picker today. I've got wool all washed and ready to go. I had the day off.
But.
The day just got jam-packed.
We butchered a couple of chickens this morning, Madman and I. The original plan was to do the remaining 10, but none of our helpers (i.e. amateur chicken-pluckers) could come and help today. So we tackled what we could handle, given how many other projects we had for the day.
Then we put 24 pounds of elderberries in the freezer. (Woohoo! Free fruit!) I would have taken pictures, but it's the same process as last year. Forks, fruit, bowls. Berries ricocheting all over the kitchen. After the first couple of hours, the fun starts to wear off...
We didn't start any wine, yet, but we will. In the meantime, the freezer is holding the elderberries for us, and, as a by-product, doing the mashing for us as well. (The formation of ice crystals within the berries smashes the heck out of them. Does a much better job than we could ever do with a potato masher.)
I butched the basil, since now that it's almost September, we could get a frost at any time. (Gotta love Zone 3. *sigh*) I made 3 batches of pesto, 2 of which went into the freezer. I filled icecube trays with the glorious green stuff - I'll bag up the individual cubes once they're frozen solid. Perfect little portions to add to pasta or soup, come winter. (So our ice cubes will taste a little funny for awhile. Big deal.)
And somewhere in between all this, I managed to bake a loaf of bread.
Madman picked beans while I was picking basil. We ate some for supper, but the rest went into the fridge, since we'd completely run out of steam by then. Tomorrow is another day.
And the rest of supper? The Second Annual first pestodilla of the season - homegrown tomatoes and homemade pesto. Life is good...
Posted by gayle at 9:05 PM 4 comments:

Life goes on. Goldie eventually stops crying and searching for her lost lamb. We stop tearing up every time we look at the sheep pasture. We're counting on better luck next time. (I think we've earned it...)

In the meantime, Goldie's fleece is being spun, slowly but surely.And there's been knitting.
Maplewing has been temporarily supplanted. 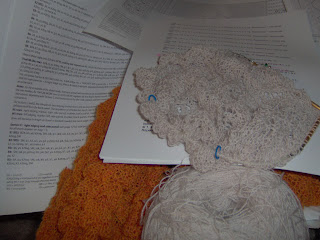 I Niebled. I have committed Niebling. I blame Cookie. 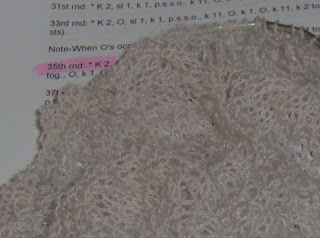 In this picture, you can see my cheat. There's no chart, so as I complete each round, I mark it out with highlighter. I'd much prefer a chart, which makes it easier to read the lace, but that's not an option with this particular pattern.
And this is the third iteration of this project - I'm shooting for a shawl rather than a doily, and the first try was on needles that were too small. (I wanted a shawl that was bigger than 24", which is what my best geometric skills told me would be the diameter, extrapolating on the first 20 rounds.)
On the second try, I'd hit 24 rounds when I realized I'd dropped a stitch around row 11. (One of those k2togs that didn't meld properly...)
This is the third try, and I'm sure hoping it's the charm.
Posted by gayle at 9:21 PM 11 comments:

Damn it to hell.

We lost Kohl.
Our best guess is pneumonia brought on by heat stress.
Goldie is crying.
So are we.
I've run out of words.
Posted by gayle at 6:41 PM 23 comments:

I can be picky about birthday presents.

Seriously. And here's why... 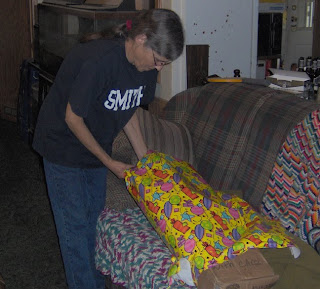 The only marking on the box was an address in Oklahoma. No help there.
Finally got one end of the box open. I could see wood, but couldn't get the object out of the box.
Did I mention it was heavy? 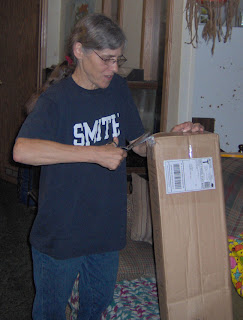 So I cut open the other end, and pushed. 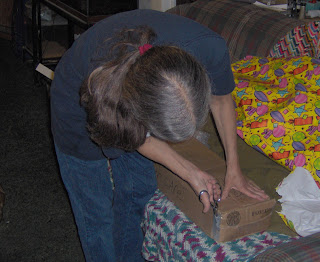 What the? A coffin for garter snakes? 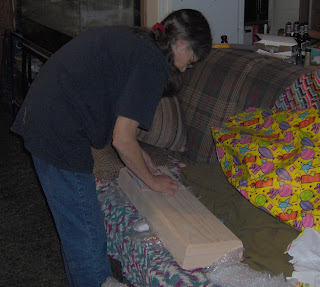 But wait. Let's get a closer look at the interesting end. I had an inkling at this point. Do you? 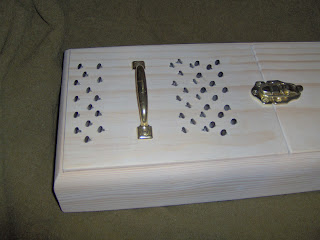 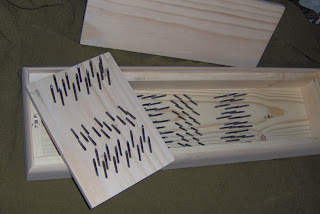 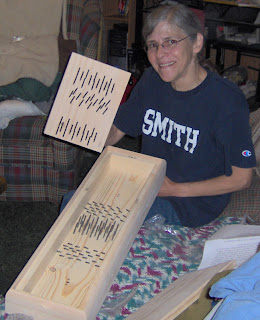 It's a handmade wool picker. And not the scary pendulum kind. (You know, the do-it-yourself mastectomy kit.)
Best. Present. Ever.
Now I've just got to go wash some more fleece...
Posted by gayle at 6:16 PM 10 comments:

It's my birthday, so I made myself a present. (How to make a lavender wand)

And I remembered to take pictures, so you can make one, too!

I read about Lavender Wands years ago - a nifty little sachet made of woven ribbon and stems of lavender - and wanted to try it myself.
There were a few bumps in the road, however... 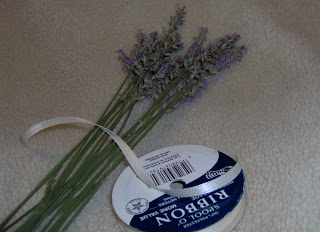 All you need is stems of lavender and ribbon. I used an inexpensive polyester ribbon, because that's what I had on hand. Silk ribbon would probably be extremely nice for this. Be sure to cut the lavender stems nice and long. (I used 17, because that was almost all I had. Be sure to use an odd number of stems!)

Step 1: Line up the bases of the flowers. Make a slipknot in the end of the ribbon and snug it up tight around the stems, just under the flowers. (Don't cut the ribbon from the spool. There's no way of estimating how much will be needed, and you don't want to run short in the middle of weaving.) 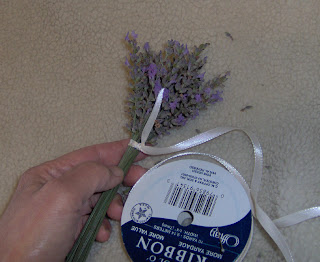 Step 2: Spread the stems out like the spokes of a wheel. The flowers will be pointed down, and the stems will be bent outward. Use your thumb to try to hold them into place. 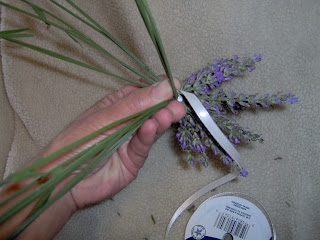 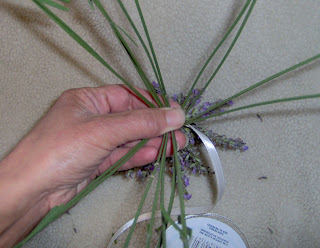 Step3: Start weaving. For the first row or two, go over and under a couple of stalks at a time, since it's pretty tight going. (Note - you can weave clockwise or counterclockwise - whichever feels more comfortable. Doesn't make the least bit of difference in the final product.) 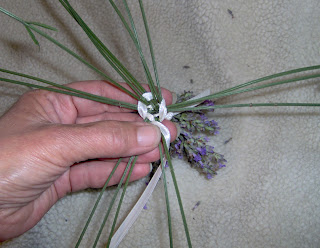 Step 4: Keep weaving. From here on, go over one, under one, around and around. 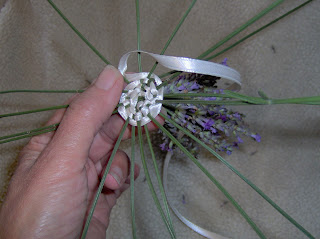 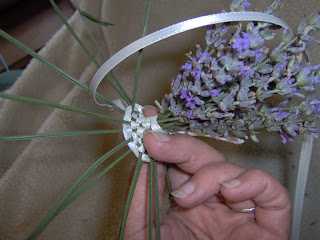 Step 5: Start tapering. By pushing down gently on the stems, and pulling the ribbon a little tighter, the weaving will start to enclose the flowers. Keep going. 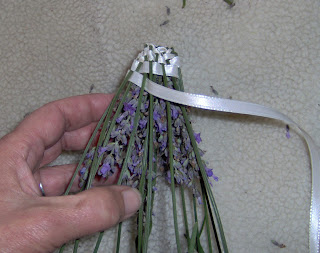 Basically, you're weaving a cage around the flowers. 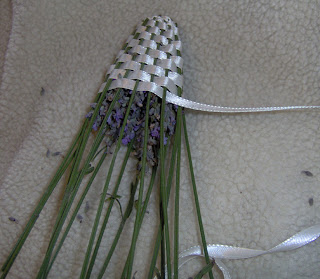 Now here's where the camera bit me on the ass. Though it assured me it was diligently recording the pictures of the next steps, it lied.
So, step 6: (not pictured) When the weaving reaches the point shown in the last picture, start gradually pulling the ribbon a bit tighter as you go around. Not drastically, or the ribbon in previous rows will go all wonky and loose - you just want it to start gently tapering.
Step 7: (also not pictured) The last row or two, after you're past the last of the flower tips, will be woven over 2-3 stems at a time and under 2-3 stems. Wind the ribbon around the last row of weaving and then down the stems for an inch or so. Tie it off with a bow, cut the ribbon, and trim the ends of the stems even. Take a sniff or two (it smells divine!) and hang it somewhere airy to dry. 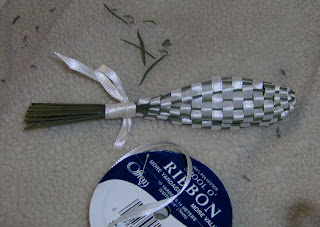 And only 7 years in the making! Maybe patience really does pay off...
Posted by gayle at 4:00 PM 9 comments:

The Kohl's have it

Kohl, it is, then.
(The name works on soooo many levels.)