I hear thunder out there.

We've had major frog-stranglers for the last 3 days running. (For those of you who didn't grow up in Kansas - a frog-strangler is a huge rain storm. Buckets of rain. Huge quantities of water falling out of the sky.)

Our sheep have an appointment with the shearer this week.
Sheep can only be sheared if their wool is dry.
Our sheep don't have sense enough to come in out of the rain.

I am NOT going out there with a blow-dryer and a really long extension cord...
Posted by gayle at 10:36 PM 6 comments:

What's that thing with the string and the sticks called again?

Oh, yeah. Knitting.
I'm still plugging away at the Drops sweater, knit with my handspun Cotswold. It's not going quickly, but it's going.
The sleeves are done: 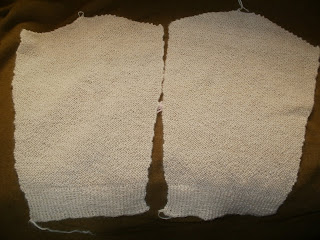 You can see the tie about midway up where I connected them in order to knit them at the same time.

And I've started the back: 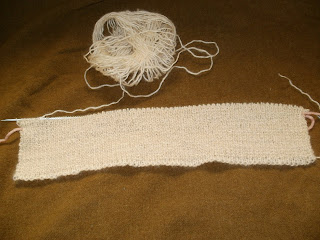 The little pink scraps of yarn at the sides are marking my last decrease row, so I have an accurate point to measure from. ("Dec 1 st each side every 1 1/8 inches.") (Or every 3cm, but my metric ruler has gone missing, so inches it is.) (It's just as well, since I can only think in inches anyway...)

And speaking of all things wooly, here's some fuzzlump pictures I took the other day. (On one of those rare days when it wasn't raining...) 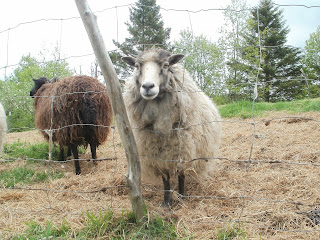 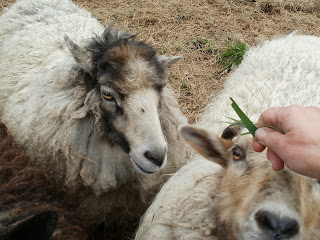 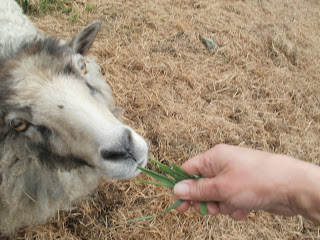 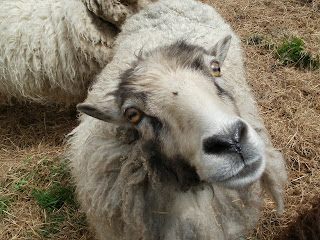 This last one is a self-kinnear: 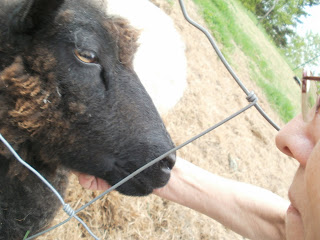 Yeehaw!
To tumultuous cheers and a hail of confetti (which was actually just a bunch of wood shavings that I'm still trying to vacuum up), the meat birds moved outside today.
Madman had prepared their new home, complete with copious amounts of food and water 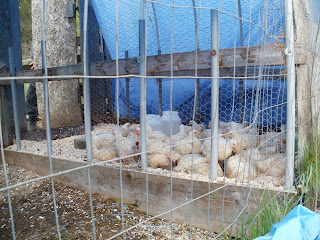 and a luxurious canopy that can be folded down at night for privacy and warmth. 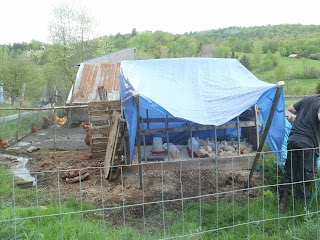 In the picture above, you can see both chicken yards - the laying flock's yard is behind the meatbird domain.
And as if all that luxury wasn't enough, we found a surprise perk growing in the chicken yard.
Volunteer lettuce: 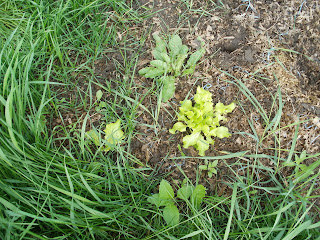 Alas, no festival for me...

Car still broken, no one to go with.
Sometimes life is just sad.
I'm hoping I have better luck when VT Sheep and Wool rolls around.
Posted by gayle at 7:28 PM 5 comments:

Normally I work Saturday, and am off on Sunday. But since I mistakenly thought this was NH Sheep and Wool weekend, I'd requested to work Sunday (Mother's Day) in order to have Saturday off.
Oi.
I swear, we had the biggest lot of jerks, cretins, and dumbasses in as customers today. People throwing merchandise on the floor, and other people walking on it (and pushing their carts over it) instead of going around (0r, heaven forbid, picking it up!!!!) People changing their minds about merchandise and stuffing it behind things in a different department, instead of taking it back where they found it, or just handing it to the cashier and saying "I changed my mind." People asking questions, then arguing with the answer. People pulling things out of packaging, then shoving the mess back (sort of) onto the shelf. (Curtains, for example. Do they honestly think that we go to some kind of 'Curtain School' where we learn to fold curtains so they'll fit back in the package?!?) Running screaming kids being ignored by their parents. Running screaming parents being ignored by their children.
In other words, a day in Retail Hell.
So what, you ask, could be the worse than that? The Hardest Mother's Day?
That would be the year I was working as a waitress in a Mexican restaurant. It was a lovely restaurant - great food, fun people to work with. I loved my job.
When customers were celebrating a birthday, the celebrant would be comped a fried ice cream with a sparkler happily sparkling, as a gathering of waitstaff sang Happy Birthday.
For Mother's Day, the owners decided that it would be a lovely gesture to give a free fried ice cream (with sparkler) to every mother. Or everyone who might be a mother, or could someday be a mother. (At least we didn't have to sing...)
What this boiled down to was that any female, 15 or older, was to be gifted with a fried ice cream with sparkler.
Now, our normal modus operandi, as waitstaff, was to grab a handful of paper napkins before we lit the sparkler and headed for the table. We'd use the napkins as a pot holder to pull the red-hot wire of the burnt-out sparkler, drop said glowing wire on our tray, and carry on with our duties.
Like I said, this was a great restaurant. We were busier than shit on Mother's Day.
All of us waitstaff, at some point during that horrendously gloriously agonizingly busy day, ran out of napkins to use as potholders.
We started pulling those red-hot wires bare-handed. And once you'd done that a couple of times, it no longer mattered. One track mark of sizzling skin, or twenty tracks, it was all the same.
The smarter of us were using our off-hands for wire-pulling. The others were blinking back tears as they were holding their pens to take orders from subsequent tables.
It was a really really long day. Many many mothers (and potential mothers) (and possible future mothers) visited that day.
There were a lot of sparklers.

At least working Mother's Day in retail doesn't give me third-degree burns.
Posted by gayle at 11:20 PM 4 comments:

In the beginning, there was dirt

Which over the last couple of weeks, (when it hasn't been raining. Which days are few and far between.) we've been getting ready to plant.
Today was the day. I finished weeding the asparagus bed, and rummaged around in my main herb bed enough to plant some more bunching onions. (I keep a running bed of them at one end of the herb garden, but the last couple of years they haven't overwintered well, so I cast out a bunch of new seed to start over.)
Madman planted lettuce, spinach, beets, radishes, and the first row of peas.
Let Garden 2011 begin!
Posted by gayle at 8:27 PM 2 comments:

Disappointment is my new middle name...

Every year I request the Saturday before Mother's Day off, so I can go to NH Sheep and Wool. I go with my mother-in-law and my youngest daughter, and we have a lovely 3-generations-of-knitters day, ogling the sheep and the wool.
But this year, my daughter can't go.
And my mother-in-law can't go.
And my car is in the shop since the transmission is trying to commit suicide, so I can't go either.
*sigh*

Hey, it's finally spring up here! For certain definitions of spring. That doesn't mean we won't get another snow or two before summer arrives (or even after summer arrives), but for up here, this is as good as it gets. 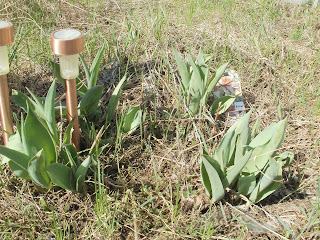 The first daffodil up is almost ready to bloom. There are a few more daffs lagging behind, but I'm surprised any of them came back after a guest weedwhacked them last year, thinking they were some kind of heavy-duty grass. So I'll take what I can get and be happy. 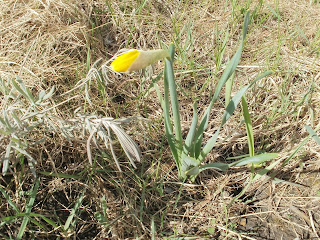 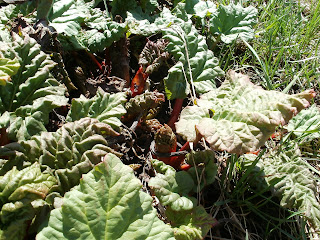 Today's big project was putting up the greenhouse that we acquired from friends who are moving away. One of Madman's buddies showed up to help, which was a wonderful thing. 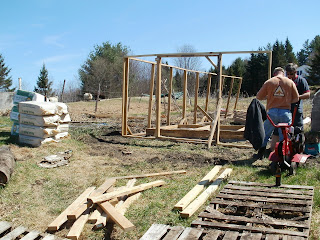 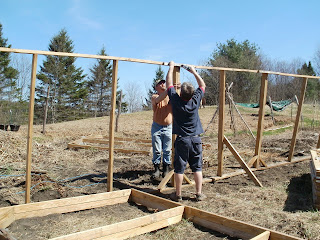 The sheep's pen is next to the garden, and Goldie spent the whole afternoon trying to cajole the guys into giving them more food. Because why on earth would humans be outside if they weren't actively feeding sheep? 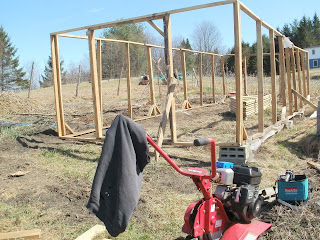 They got the walls up and a couple of the roof trusses attached before they had to call it quits for the day. 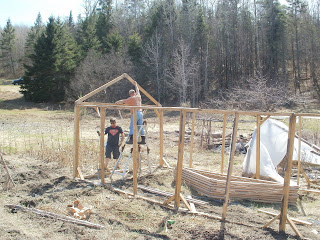 Once the structure is complete and the plastic is on, we'll be able to set out our tomato and pepper starts and gain about a month on the growing season.

The chickens have been taking advantage of the warmer weather by spending lots of time outdoors. But there's a serious hitch in their enjoyment. 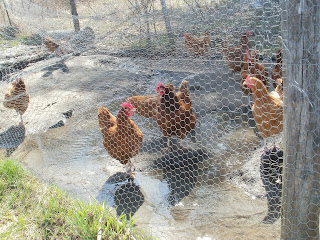 Over the last couple of years, several new springs have bubbled up in our yard. Each year, more and more water is gushing up out of the ground and heading down the hill. This year, half the chicken yard is now a bubbling stream. Once the greenhouse project is done, Madman will go to work trying to channel the water into the trench he's been carving to handle all the water runoff. We really didn't need a babbling brook running from the upper end of our garden, through the chicken yards, and down our driveway...

Here's one of our spring-molting chickens. I think she looks like a Skeksis... 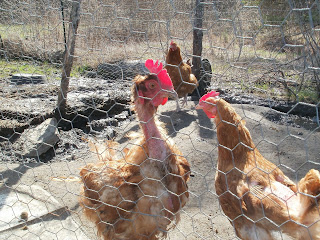 One of the day's smaller projects was removing the Rhode Island Red chicks from the Big Box o' Chix and putting them into their own little habitat. The CornishX chicks have entered the stage where they spend all their time eating, and they were starting to elbow out the smaller Red chicks.
Here you can see the size difference. The Red chick is actually a day or two older than his mutant brethren, but is half the size. 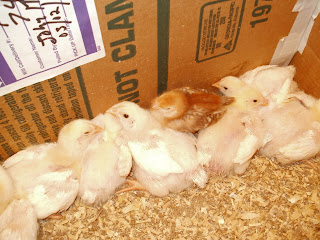 Madman had actually started the transfer before I realized what he was doing (I was still absorbing coffee, so not too quick on the uptake.) I ran for the camera since I wanted to get that size comparison picture.
The Red chicks were a little spooked, as they were getting scooped up one or two at a time and whisked away to the other box.
Here's one trying to hide in the crowd. 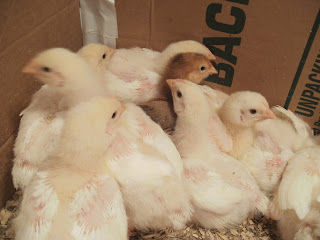 Here they are, happy in their new home. 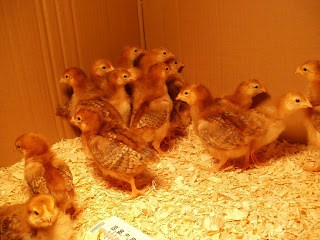 No more having to fight through a crowd of big hungry buffoons just to get a bite of lunch.
Posted by gayle at 6:54 PM 10 comments: