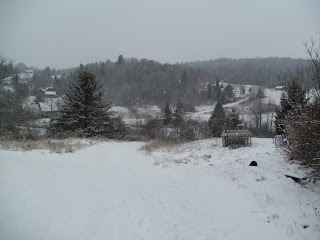 The sheep, shown here happily munching on hay, have a light dusting of snow on their backs.  Cuz, why would they go inside a shelter when there's a perfectly good snowstorm to stand out in?
. 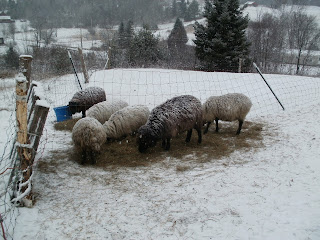 The ones who seemed ticked off by all the white stuff are the turkeys.  They're too young to have experienced it before, and they spent most of the day stalking around making loud "Pwweot!  Pwweot!"  noises.  Apparently this is Turkey for "WTF?" 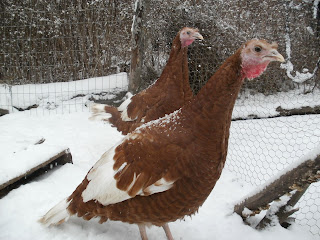 They spent the latter part of the afternoon perched on their gate.  I think they were tired of walking in the white stuff, and why would they go inside their shelter when there's a perfectly good snowstorm to stand out in?

For the first year since I started the blog, I'm not going to do NoBloPoMo.  I'm having trouble posting once a week - once a day is totally out of the question.  Though I will try to post a little more often.  The activity level of summer has tapered off, though we still have sheep, chickens, turkeys, and rabbits to tend.
We butchered our original turkeys, selling one and putting the other two in the freezer, but someone gave us two pretty Bourbon Reds, which is a heritage breed..  They're not old enough to tell what sex they are yet (and after the loop one of our first turkeys threw us, we're not going to guess), but we're hoping for a male and a female so we can try raising some of our own.  With our luck, that won't happen, of course, but we can still hope.  The same person also gave us two young female rabbits.  Our sole surviving rabbit, Stiffler, is verrrrrry excited to have new girls in the neighborhood.  We put them in a cage next door to his, and he's been combing his hair and practicing his pickup lines ever since.
Soon, Stiffler, soon...