Friday morning was our Annual Sheep Shearing Day.  (I admit I slept through most of the actual event.  I was scheduled for a night shift that day, and Madman graciously let me sleep in.  The only time our wonderful much-in-demand shearer could make it to our place was literally first thing in the morning, and by the time I woke up and got myself organized to head outside with the camera, the last sheep was shorn and the packing up had begun.)
Since the weather has taken a turn for the warm, the sheep seem pretty happy with their haircuts.

Though Merlin looks a little embarrassed about the nakedness. 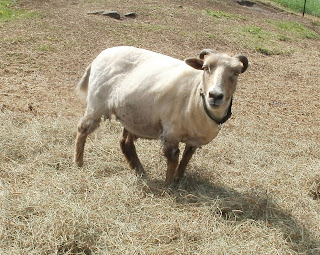 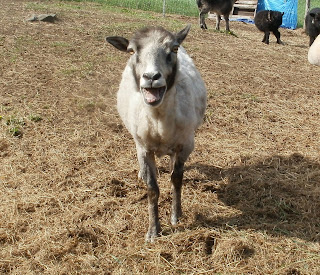 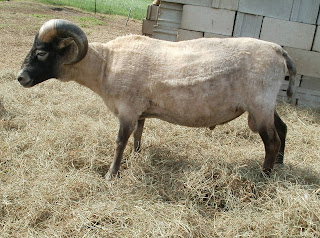 Here's Merlin, Goldie, and Smoke - they're watching Madman running the rototiller over in the garden. 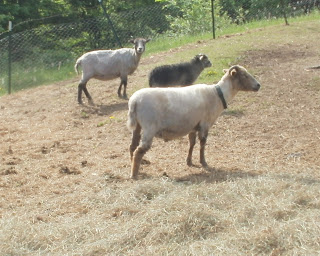 Speaking of Smoke (and we've both taken to calling him that), here's a pic of him.  If you look really closely, you can see where the buds of his horns have started growing.  He's a hard one to get a photo of, since he's a little shy. 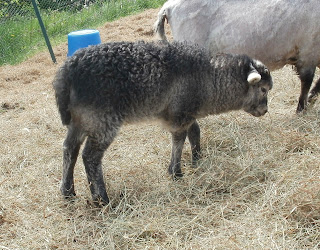 And I haven't been able to get a picture of Onyx at all.  Every time she sees me, she comes running over and presses her nose to the camera.  Just in case it might be food.

And the bitten up broccoli?  Madman transplanted a bunch of broccoli plants yesterday, then headed for the feedstore to pick up a few things for our menagerie.  When he got back, he found Goldie outside the fence eating grass as fast as she could go, and several of the little broccoli plants had most of their leaves chewed off.  Now, it could have been Goldie who did it, or it could have been the lambs.  We can't imagine Goldie getting out unless her lamb was already out, so we're inferring that the lambs are just as liable to be guilty as she is.
First the garlic, now the broccoli.  The lettuce is making a comeback from the mowing the little devils gave it.  And Madman has replanted the peas twice now.

Are we the only ones who provide a salad bar for sheep?

I inhaled a blackfly and the lambs have eaten my garlic.

Well, we *thought* we had the lambs thwarted...

I was going to post this morning that Madman had cured the wandering lamb problem with a new addition to the not-quite-maximum-security arrangements we have around here. 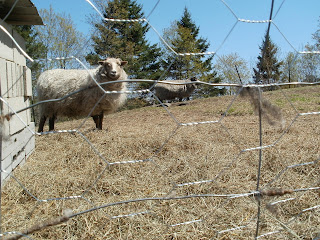 A brand new roll of chicken wire (which is always a handy item around here) got stretched around the section of fencing with the too-big holes, and stoutly stapled into place.
Yay!  Now Goldie has her lamb right where she can control watch over him. 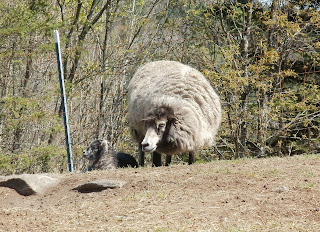 I took a bunch of pictures, showing sheep inside the fence (for a change), and went indoors to start a smug little post.

I hadn't even finished writing it when I glanced out the window while pouring another cup of coffee, and saw the two little ewe lambs outside the fence. 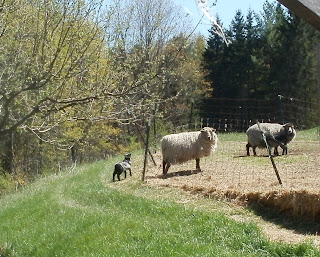 By the time I grabbed the camera and got out the door, one of them had already wriggled through the (small) holes in the mesh, but one was still looking for the way back in, bleating her little dog-toy blatt.  I ran back inside for my shoes (cuz naturally, if I'm dashing outside for an Animal Event, I'm going to grab a camera but not my shoes.  Bloggist R Us...), thinking I would have to catch her and put her back in.  But by the time I was suitably shod, she'd managed to find a good spot on her own. 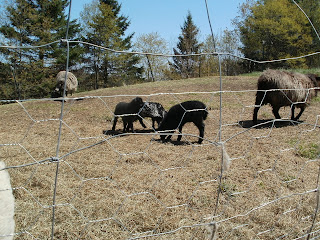 I don't know who is going to end up crazier - Goldie or us...


Every two seconds, all day long, Goldie does this:. 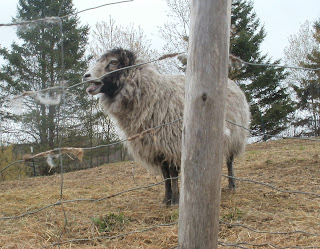 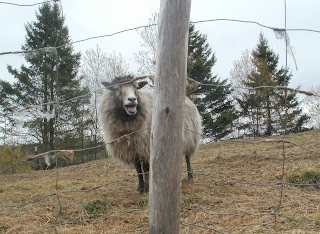 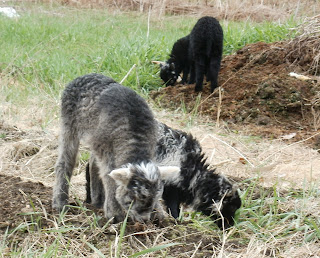 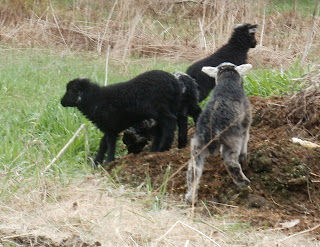 That's lambs in the garden and playing on the compost pile.  (Little he's-not-named-Smokey is in the foreground of each picture, tagging right along with his little cousins.  And totally pretending he doesn't hear his mama calling him.)

And I'm not kidding about the two second intervals.  Madman and I are starting to develop twitches...

A difference in parenting styles

Goldie and Onyx are two very different mothers.  It might be a case of age, experience, or temperament, or a function of just how many lambs each is trying to deal with.
Onyx, our little first-timer with triplets, is a very casual sort of mother.  "What, are you kids back already?  I thought I told you to go play outside."  Though given the fact that she has three lambs and only two spigots, feeding time takes up a rather large portion of her day.  By the time all three have taken turns and been fed, someone's probably hungry again.
Goldie, on the other hand, with only one lamb, is an intense mother.  Her lamb is supposed to be by her side At All Times.  "You!  Get your fuzzy little butt back over here.  Where do you think you're going?  You sit right there, mister, till I tell you to get up."
It's funny watching Goldie's lamb (whom I have not named Smoky, since Madman insists that we shouldn't name them, but if I were going to name him, he would totally be Smoke or Smoky)  (but I haven't named him) playing with Onyx's lambs.  The first three, though a week+ older, are smaller than he's-not-named-Smoky.  (Well, the ram lamb might be roughly the same size, but it's pretty close.)  So, technically they're the Big Kids - vastly more experienced in the ways of the world - and he's-not-named-Smoky tries to copy them in their bouncing and gamboling and shenanigans.
The trouble begins with our fencing.  The lambs are small enough that they squirt out through the mesh of the fence and go lolloping around in the garden.  We spent the first week or so in a panic, running and catching them and putting them back into the paddock.  But they'd all be out again before we'd even finished capturing them all, the little brats.  Short of replacing all our fencing (which is way outside our budget at the moment), our only hope is that they'll get too big to fit through the holes before they get into serious trouble.  (We've tried explaining that the fence is there for their protection, but sheep are notoriously immune to the Voice of Reason.  And lambs are the worst - a really short attention span.  We lose them at "Ya know, that fence is" and they're out in the garden again.)
Now, Onyx is okay with her lambs bumbling around outside.  "Yeah, whatever, kids.  Try to stay out of trouble."
Goldie, on the other hand, loses her mind.  "My Baby!  My Baby is Outside!  The Fence!  Without Me!  Get back in here!!  NOW!!!  NOW!!!"
It worked the first time.  Little he's-not-named-Smoky watched the Terrible Trio squeeze through the fence, just like he'd been doing every day for the first week of his life, and this time the lure was too much.  He followed.  Goldie had a full-tilt meltdown.  He's-not-named-Smoky froze in his tracks, turned around, and tried to figure out how to get back inside.  It was hard for him - getting out was downhill, but getting back in involved jumping uphill through the fence, and he's still clumsy with youth.  He finally managed it, with Goldie shouting at him at the top of her lungs through the entire ordeal.
He stood by her side, ears down, little lower lip quivering, watching as the Big Kids cavorted and capered and knocked each other down in pure joy.  Every time his ears pricked forward and he looked like he was going to step toward them, Goldie would make a noise deep in her throat.  "Don't even think about it, buster."

And today?  Guess who's out in the garden right now, playing with the Big Kids, while his mother goes batshit-crazy?