It's a little embarrassing, frankly.
Last year, I had a blast running LambWatch2012. It was a ton of fun, tracking the days and who had guessed what.  I had fond hopes of making it an annual event.
Well.
Last fall, Madman and I did a little quick math and realized that Sauron and Smoky, pastured with Onyx, Goldie, and the girls, were fast approaching the age that Orion was when we bought him the year before. They were already starting to have head-butting contests and generally starting to behave like adolescent boys trying to impress the girls by doing any dumbass thing that occurred to them.  Since we wanted to breed Onyx and Goldie to Orion again, and we didn't want to breed Tiny and Abigail, something needed to be done.

Clearly, we needed A Plan.

Longtime readers of the blog are now giggling.  (I can hear you, you know.)  Some are even guffawing.  You've seen what happens when Madman and I form A Plan.

So, here was The Plan.

1.  Put Sauron and Smoky into a separate pen so they don't get up to any shenanigans once they figure out what shenanigans are.
2.  Count backward from the general time we want lambs in the spring to figure out when to move Goldie and Onyx up to the pen where the Big Boys live.  Orion and Merlin have been leading the bachelor life for months up in the upper pen while the lambs grew up.  Orion will be glad to see women in his life again;  Merlin's interest will be more in the company.  (And possibly the entertainment)
3.  Leave Abigail and Tiny in the original pen, so they won't get bred.  We don't want to breed them until they're over a year old, so they have a chance to fully mature before the stress that pregnancy would put on them.

We'd end up with three pens, with from 2 to 4 sheep in each.

So, we moved the little boys into their own pen, next to the girls' pen.  That lasted for a couple of days, then we got up one morning and there were six sheep in the original pen.
The boys had rejoined the girls.  And started acting all possessive and rambunctious and stuff.
We checked the fencing (I'm not even going to link.  Click on either 'sheep' or 'chickens' in the label cloud and start reading anywhere.  We've had issues with fencing.  *sigh*), strengthened the areas that they might have  escaped through, and moved them back.
The next morning there were six sheep in the pen again.
Lather, rinse, repeat.
It reached the point that we'd move the little
darlings and they'd be back before we made it into the house.  We finally saw how they were doing it - they were literally climbing over the fence.
So, we did what any sensible couple with years of animal husbandry experience would have done.
We gave up.  Short of cutting off their legs, there wasn't much we could do to discourage them, and by that time, the damage had probably been done.
So, there was no way of figuring a starting date for LambWatch2013 - we'd been stuffing those boys back into their bachelor pad for weeks before we bowed to the inevitable.  With no Ready-Set-Go date to do math with, there was no way to set up a contest.
So, we're just winging it this year.  Genetically, things could be awful, or almost awful.  Or maybe okay.  For Onxy and Goldie, the outlook is better.  If they weren't bred by their own sons, then their lambs have parents that aren't related to each other and would be fine.  If they were bred by their own sons, well, maybe not so good.  And the little girls are the real problem - their choices are their brother and their half-brother.  There's an old saying among animal breeders - "If it works, it's called line-breeding, and if it doesn't work, it's called in-breeding..."
The only thing we know for sure is that lambs are due any time now.
After all, Madman planted peas last Sunday...

Here are a few pictures from the gazillions that I took -

This is Tiny, just about done.  About 30 seconds after this was snapped, she took off like a rocket.  It was her first experience with shearing, and she wasn't impressed. 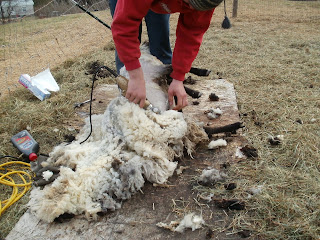 Here's Smoky getting his mani-pedi.  He didn't like shearing much, either. 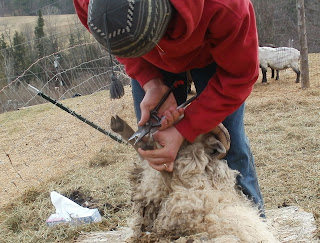 He thought the whole thing was undignified. 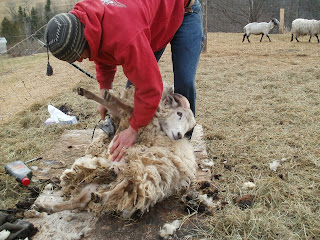 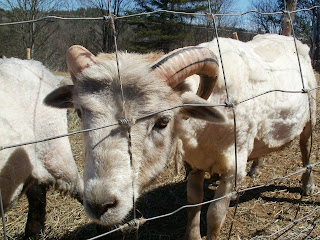 I tried to get a good picture of Orion and Merlin post-shearing, but they wouldn't let me get any closer than this... 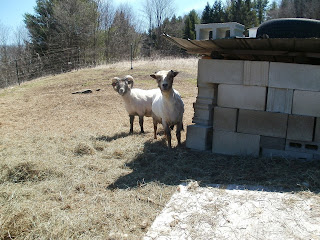 One thing we confirmed with the fleece removal is that all the girls are pregnant.  Here's Tiny and Onyx, both a bit bulgy. 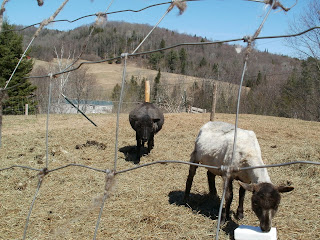 And a closeup of Onyx, showing that, once again,  she's as big as a house.  I hope she doesn't have triplets again.  (Or from the size of her, quadruplets...) 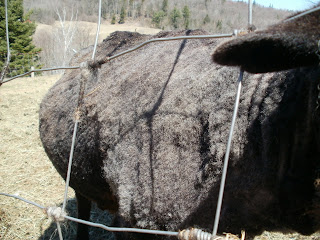 The final tally?  Eight, that's eight, bags of fleece out on the deck. 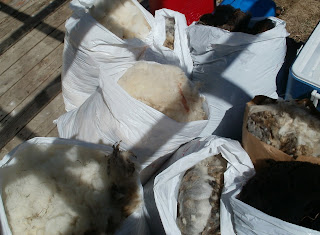 I need to start spinning faster...

You know your life has gone pear-shaped when...

you have to do a google image search for 'weasel poop'.
Because of something you found in your kitchen.
Now, I have nothing against Weird, per se.  Weird is fine.  Weird makes life interesting.
But when you have to get a new Hav-a-Heart trap (because the old one is too big and still full of skunkiness), and set it up in the living room, life has become a wee bit too interesting.
And it's going to have to be a two-step process.  Step one is to set a baited mousetrap in the Hav-a-Heart, in order to catch a mouse, which will become the bait for the weasel.
Maybe I'll just pretend there's no weasel.  Everything is Perfectly Normal, here.
Or maybe I'll just accept that it's good to have a creature in the house who catches mice.  Our cat used to catch mice.  Nothing Weird about that.  There's just a tiny little invisible ferrety thing catching mice now, just like a cat.  Perfectly Normal.
Yeah.

I swear, if Rod Serling shows up at the door, I'm going to slam it in his face.

I think I heard a peeper!

While driving home from work tonight.
Or maybe my car has just developed a new and annoying noise.
In which case I'm not nearly so excited...

(For those who don't know what peepers are)

Two steps forward, one step back...

We've had a relapse in the weather department. 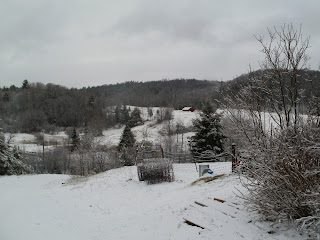 We were down to bare ground on Friday.  Saturday I woke up to that.

My lavender is clearly Not Happy: 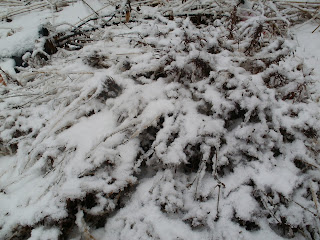 And here's the view through my big rosebush: 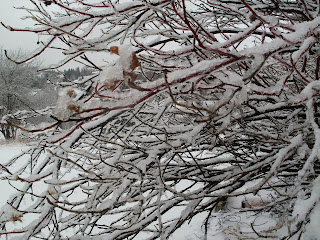 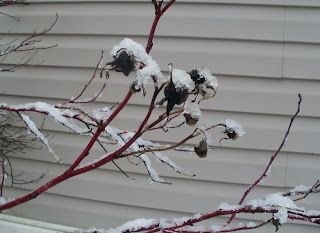 It rained later in the day, and washed most of the nasty white stuff away.  But who knows what tomorrow will bring?

(It was particularly disheartening when I went to transfer these images from the camera's memory card - the photos were right next to the azalea shots I took in Florida...)

(And to anyone who was worried - no, I wasn't eaten by weasels.  No further sightings of the little fella, though we did find a mousetrap, sprung and sans mouse, bait still intact, pulled back under the stove...)