Visiting my Dad & family for "Second Christmas" - I'll be back Sunday.
As usual, I forgot my camera...
*sigh*
Posted by gayle at 7:11 PM No comments:

Merry Christmas!
May your holiday be divine!
Posted by gayle at 12:06 AM No comments:

A Little Help From My Friend

My little Ursula saw how far behind I'm getting, and naturally offered to help.

"Crap. Afraid you're on your own."

Oh, well, her heart is in the right place.
Though it really would have helped if she'd knit the soles of that other pair of clogs...
Posted by gayle at 7:38 PM 1 comment:

Finished the Crofter's Cowl. Pattern is by Gudrun Johnston at The Shetland Trader. This was a great easy knit. The lace pattern was simple and easy to memorize - one run-through and I didn't have to look at the chart again. The grafting wasn't as bad as you would think - but then again, I've never had a problem with grafting.This picture shows the color really well, but the lace is hard to see...

On the other hand, this one shows the lace off really well, but the color is way too dark.

Pattern: Crofter's Cowl by Gudrun Johnston (The Shetland Trader) (pattern is on the sidebar as a free download)
Yarn: Brown Sheep Nature Spun - (245 yards/100gms) Blue Fog - I used maybe half the skein. I'm thinking of knitting another one with the leftovers, so that will tell the tale
Needles: Size 8 circs
Mods: None. I actually followed the pattern as written. (Yeah, yeah, I think it's a miracle, too)

I'm very happy with this. I want one for myself, now. Maybe in purple...

Though I'd be a lot happier if I had remembered last night that I had put this in to soak so I could block it. The plan was to let it dry overnight and ship it today. Unfortunately, I went off to bed, completely forgetting the fact that it was still sitting in a bowl of water.
Crap.
Another day behind.
Posted by gayle at 1:55 PM 2 comments:

Some people think this crap is 'pretty'... 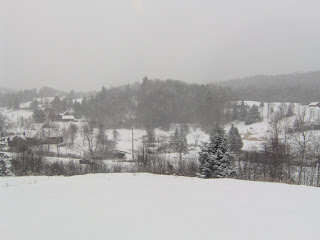 
(Note - that picture isn't blurry because it's out of focus. It's blurry because of the quantity of snow being dumped on us. *sigh*)
Posted by gayle at 10:32 AM 3 comments:

I swear it's Magic!

The clogs are done and drying. Woohoo!

These are bigger than ginormous - just crazy big. I began having doubts at this point... Notice how big they are compared to my hand.

I ran them through two cycles of hot/cold, holding my breath the whole time they were swishing.

Hey! They look like clogs!! And here's my hand again for comparison purposes...

Pattern: Fiber Trends Felted Clogs (designed by Bev Galeskas)
Yarn: Brown Sheep Shepherd's Shades (131 yards per 100gr skein) - less than one skein Red Plum, a little over one skein Steel (but I knitted a gauge swatch out of the Steel and felted it, so not sure how much yardage that consumed)
Needles: size 13 circs (I had to go out and buy them special for the project - I own a bajillion small needles, but not many large ones)
Mods: I knitted these single strand, not doubled like the pattern called for. The gauge swatch I tried with the doubled yarn didn't felt down small enough. Shepherd's Shades felts gloriously and I decided it was worth the risk. (They were bound to fit someone...) I lucked out!

The pattern was easy to knit, though I did have to pay attention. (The first try had to be ripped out because I inadvertently skipped some rows. After that, I used a sticky note to keep track of what row I was on. )

I now want a pair of these for myself! Good thing I bought 4 skeins of the Shepherd's Shades...
Posted by gayle at 10:58 AM 2 comments:

And then there were three

Three fingers down, one to go. (Not counting the thumb, of course. Thumbs are a whole different category.) Annemor 10 marches on. The colors are definitely growing on me.

And, just because I didn't have enough things cast on:

Yep. Finally started these clogs. I bought the pattern last winter, but hadn't gotten around to trying it out. I've made a lot of felted slippers (I'm wearing a pair, now) and really enjoy knitting big floppy whatsits and then washing them to the brink of destruction. (Isn't there something delightfully perverse in shrinking handknits on purpose...)
These are going to be a gift, but the recipient will be chosen after they're done - I've found this to be the safest course with felted objects. You know, you take it out of the washer and think "Okay, now who do I know that this will fit?" So much better than planning it for Aunt Betsy and finding it would only fit little baby cousin Sophie...
I've used the Shepherd's Shades before - it's a really great yarn for felting. But using it in this pattern is going to be a complete experiment. The pattern calls for using the yarn double, but when I felted a swatch with the SS doubled, it was way too big. So I'm trying it single, knitting the large woman's size, and hoping it will fit someone on my list when I'm done. Keep your fingers crossed for me - it might be a bumpy trip...
And as I knit this pattern, my admiration for Bev Galeskas is enormous. I've done a lot of designing myself, and I know how tedious it can be - knit knit knit, oops, that didn't work, unravel unravel unravel, knit knit knit, CRAP!! unravel unravel unravel... Which is crazy-making, but at least you can use the yarn over. When designing for felting, however - you don't know what you've got until after you felt it! That yarn is gone, baby. Holy frustration, Batman!
I had to go to the LYS for size 13 needles for the clogs. I may have accidently bought a couple of skeins of yarn while I was there.

For Christmas presents, of course. Because I definitely don't have enough things cast on, yet. Look at all the empty needles just lying there doing nothing!
Posted by gayle at 10:40 PM 2 comments:

Honk if you love Norma!

My normal morning routine is to check my email while I'm waiting for the coffee to brew, then check my blog stats, then hop over to bloglines to see what's up out in the world.
This morning, however, when I checked my stats, I was startled to see that I already had more than my normal number of hits and it was only 8 o'clock in the morning! WTF? I checked to see where on earth all these people were coming from...
Ah! Norma sent them!
(Thanks, Norma!)

Finally got some fingers I'm happy with. The pattern calls for casting on stitches between the fingers, but I still wasn't getting enough to knit the star pattern on the up-side and the diamond pattern on the palm-side. So I fudged a little, and it seems to be working out.

The pink yarn is the waste yarn carrying the rest of the finger stitches, the brown yarn is carrying the thumb stitches.

And here's a modeled shot of the glove - I'm just starting the ring finger.

And notice that once again, I'm knitting the right hand first and trying to photograph left handed.
Doh.
I never learn.
Posted by gayle at 12:09 AM No comments:

Annemor 10 is not kicking my ass

Well, maybe a little...
I've been working on the right-hand glove. No problems up to the point where I started knitting the fingers.
But.
I knitted most of the index finger and found it's too tight and too short. So, I ripped it (the finger, not the whole glove...) out and will be starting it over. Part of the problem is that the little star on the front side of the finger needs 13 stitches, but the pattern only shows using 8 stitches from the body of the glove. Now, I'll admit my math skills are a little rusty, but this seems like a real head-scratcher to me...
I'd made a few increases to try to compensate, but apparently I still don't have enough stitches. And if it comes out too short again, I think I'll add a partial star to fill in the fingertip.
We'll see how it goes.

And yes, my little kitty in yesterday's post is double-pawed. This makes her 'helping' with my yarn a real disaster. The claws on the extra paw don't retract, so she has a hard time letting go.
And she loves yarn. She particularly likes bringing yarn to me. I have to keep my sewing room door closed, otherwise she drags my whole yarn stash out - taking the scenic route under the table, around the chair legs, under and over the couch - leaving a trail of yarn wherever she goes.
"Here ya go, Mama. I brought you yarn!"
*sigh*
Posted by gayle at 11:21 PM 3 comments:

Moving right along on the Annemor glove. I'm past the point where the thumb stitches are put onto waste yarn, so about halfway up the palm.

And here's the front:

The Palette is much more loosely plyed than the Wildfoote. If anything, the Wildfoote is over-plyed - I keep having a problem with it twisting back on itself. Since the Palette is fluffier than the Wildfoote, it's working out well as the color I knit with my right hand, with the Wildfoote in my left.
As for that "Green Tea Heather" name? No matter what they call it, it looks chartreuse to me. Not a fan of chartreuse. Which is why it's not the background color. No way could I give someone a pair of chartreuse gloves. Especially if I like them well enough to knit them gloves in the first place...
Posted by gayle at 7:39 PM 2 comments:

It's been a real mitt-fest lately.
Lest anyone think I started a new pair of Selbu gloves without finishing the first ones:

Here they are! I still have to weave in a bunch of ends, but I typically have to wait for the mood to strike, then maniacally weave and weave and weave. If I try to push it, it just leads to tragedy...
I've also got these fingerless mitts going. The plan is to pick up stitches across the backs at the base of the fingers, and turn them into convertible mittens.

It looks much better on my hand. (Though it would be a lot easier to model if I had finished the thumb.)

The clock is ticking down to Christmas. I'm probably going to wish I had chosen to knit hats...
Posted by gayle at 8:10 PM 3 comments: