"Uh-oh." Madman said. "You dropped your knitting garrotte."
He picked up my circular needle from the floor and set it on the coffee table for me.

A Different Sort of Carrot 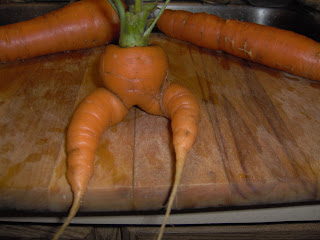 Frankly, I can't thing of anything to say. Or rather, I can think of any number of things to say, but perhaps it's best to keep such thoughts to myself...
Posted by gayle at 7:18 PM 11 comments:

The last couple of weeks have been a blur. Long days at work, struggling to do more than was physically possible in the hours available. I drag my butt home, eat supper, and fall asleep on the couch. Usually with knitting in my hand...

Yesterday was exciting, though. As I neared home, I saw a hot-air balloon up in the sky over my house. I ran inside for the camera.
My photo-editing software is not being co-operative, so this isn't a very good picture: 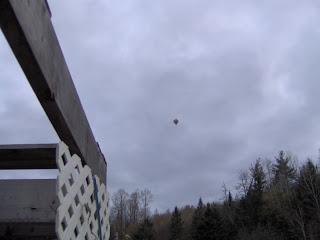 (Objects in camera may be much closer than they appear...)
The balloon was actually close enough to the ground (and to my house) that I could see and hear the burner firing. 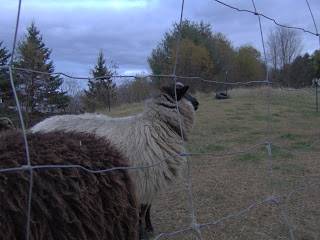 Goldie was keeping an eye on it.
Though the youngsters were more interested in whether I was going to give them grain or not. 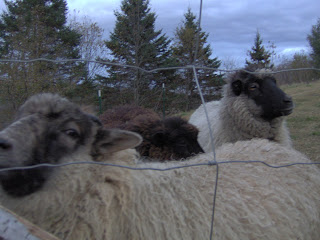 This is a balloon that we see several times a year in our neighborhood. The flyers are an older couple (and by older, I mean they're in their 80's) who balloon in warm weather, and cross-country ski in the winter. My in-laws first met them when their balloon made an emergency landing in the yard. Nice folk.
Watching a hot-air balloon always leaves me torn. Part of me is saying "Oh, doesn't that look like fun?" and the other part is saying "Are you insane???? That thing is way off the ground!"
Posted by gayle at 11:03 PM 8 comments:

The Dark-side of the Scarf

Laurie expressed interest in seeing the back of my scarf-in-progress. 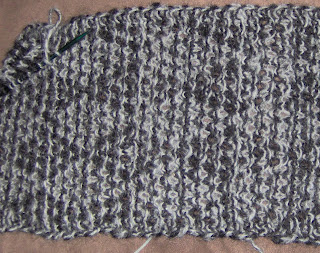 All those sl1wyif and sl1wyib stitches give you lots of little carries on the backside. There's a shadowy image of the diamonds that is sort of interesting, though. If I was slightly masochistic, I'd be knitting this in the round, so there would be no 'wrong side.' But I don't really need to be any crazier than I already am, so I'm continuing with the original plan.
Posted by gayle at 8:49 PM 4 comments:

What we saw by the dawn's early light: 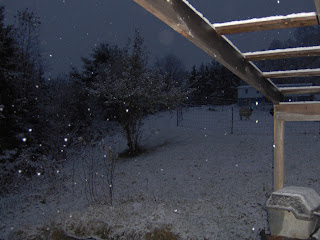 It's only mid-October. But it is Vermont, after all.
Still snowing as I got ready to leave for work. 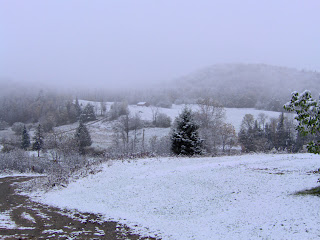 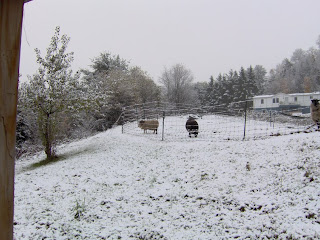 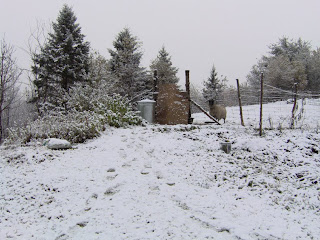 There was talk all day of "This won't stick." But there's always an inherent fatalism in that remark. This one won't stick, but the next one might. The one after will stick, for sure. We'll be back in the land of boots and snowshovels.
Full battle gear will be required before leaving the house: hat, coat, scarf, boots, gloves. Ice scraper. Snow brush. Extra time will have to be allowed in the morning for shoveling out to the car, brushing off the snow, warming up the engine.

I was hoping to think of something special for a milestone post. But the most special thing going on seems to be that I put a knot in my back from spinning too much, and had to take a few days applying heat, resting, and mostly groaning. Alternating with grumbling. And jonesing for the wheel...

Here's what I've got so far: 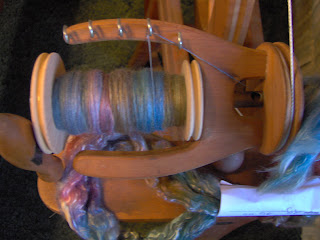 One thing I've learned is that it takes a looooong time to fill a bobbin with singles for laceweight. I'm getting close to being halfway through that first 2oz batch of merino-tencel. At this rate, I may finish the plying in time for cake and ice cream at my 100th birthday party.

I did manage to get a little knitting done. The scarf moves forward: 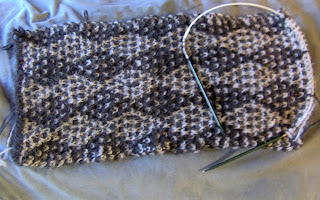 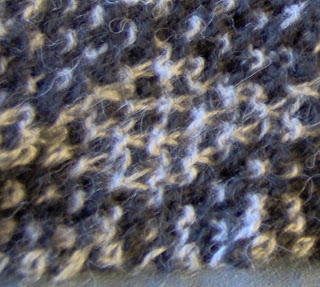 It's actually a simple slip-stitch pattern, with only one color at a time in play. I like the way it looks more complicated than it is.

And today started with a cold rainy morning - perfect for staying indoors and baking. I invented a recipe for oatmeal/apple/walnut scones. Though, technically it's really a bannock, since it's baked in one piece. 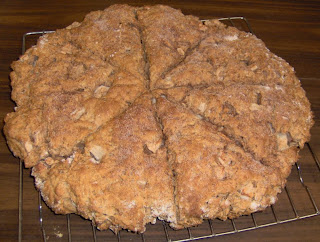 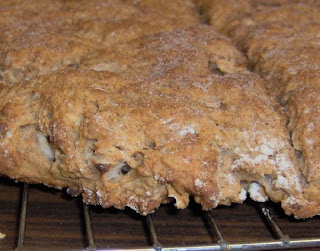 I'm going to try to sneak in a little spinning today, now that my back is better. I just need to remember to step away from the wheel...
Posted by gayle at 3:42 PM 7 comments:

What are the odds?

What are the odds that I sat up late last night and tested out the merino/tencel? 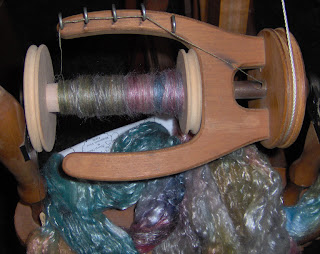 AnnaMarie and I set out early this morning in search of Tunbridge, the new central location for Vt Sheep and Wool. Now, she may have an unerring sense of direction, but she was operating under the handicap of having me for a navigator, so it's probably a miracle we found the place. (Even though I have been to Tunbridge many times. That has no influence on the odds of me finding a place again. I'm famous for logically considering all my choices at an intersection, and then turning in exactly the wrong direction.)
We're lucky we went as early as we did, as the weather got progressively worse as the day went on. We spent a good part of the day ducking out of the drizzle, then out of the rain. The fairgrounds got squishier and squishier by the hour. But there were smiles under the umbrellas as we looked at the crowd. Just normal Vermont fall weather...


We looked at every fleece, every batt, every yarn, every color, every spindle, wheel, and swift. We paused for lunch (during one of the downpours) to plan which booths we were going back to. Now, I'd seriously just come to the festival to look. At most, I planned to buy another bobbin for my spinning wheel. I have more fleece and roving than I could spin in a year, even if I quit my job and gave up sleep. But I mentioned that I'd been seeing the merino/tencel roving at The Sheep Shed at Mountain View Farm booth every festival for the last 3 years, loving the colors, and had always kicked myself for not buying - I've never spun tencel before and wanted to give it a try, and this time I was actually going to buy some.
Well, we got back to the booth, I drooled, and finally made up my mind which colors to get (there are too many pretty ones. It was hard.) I actually had 2 of the beauties in my hand, when I spied a gorgeous merino/silk blend that called to me. I held up the tencel blend next to the silk blend. "Oh, I wouldn't ply those together" said AM. "Oh, no," I answered, "I'm just trying to decide which I'd rather have..." To which she replied "Girl, if you don't buy that tencel, I will kick your ass." I laughed and bought the tencel, remarking to the bemused vendor "Now that's the sign of a true friend!" 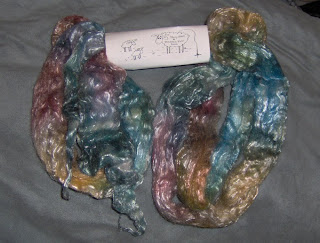 That's my merino/tencel. I love it. Truly and wholeheartedly. I have 4 ounces of it, thanks to my dear friend, AnnaMarie. I just have to keep remembering that I need to get some knitting done...
We ran into Norma and Joansie - neither AM nor I had met Joansie in person yet, so that was wonderful. And seeing Norma always makes a great day even better. Norma and I had brought along our red-scarves-in-progress, so there was a quick show and tell.
I only took one picture, unfortunately, and sadly the flash took so long to charge that the smiles ran out... The picture came out looking like Norma had just said something shocking to AnnaMarie - and I'm having a good time trying to imagine what could possibly shock AM.
Though Norma would be the one who could do it...
Posted by gayle at 7:49 PM 6 comments:

There's a word for that in German 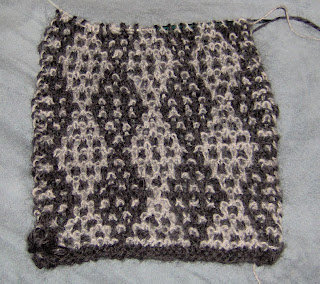 Two and a half repeats! With no major errors!
Well, I did have to rip 2 rows and reknit. It was a Hubris Error. I thought I had the pattern down, and didn't look at the book.
You know that feeling of supreme-confidence-of-"I-know-exactly-what-I'm-doing"-that-suddenly-plummets-as-you-look-down-and-realize-you've-royally-screwed-up.
Yeah, there's gotta be a word for that...
Posted by gayle at 7:30 PM 5 comments: