Okay, quick show of hands - who wants to see some pictures of sheep?


Leading off with the fellas, Merlin and Orion.  They're still by themselves in the back pen, waiting to be reunited with the girls.  (Another week or two, or when we can get ourselves organized to do it.) 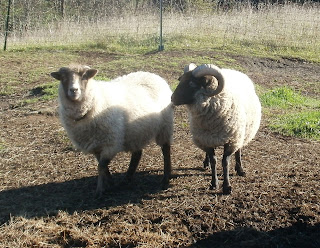 I knew that Orion's horns had grown, but I didn't realize how much until I took this pic: 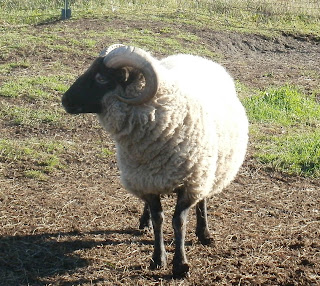 and compared it to this one from last year when we first brought him home: 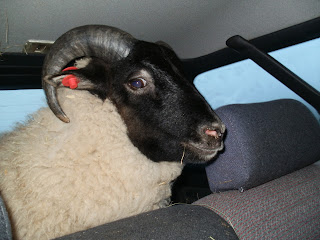 And here are the Little Guys, who are now about the same age as Orion was.  Which means we've gotta do some sheep separating soon (or hopefully, sell them) before they realize they're Almost Grownups and take some unfortunate action. 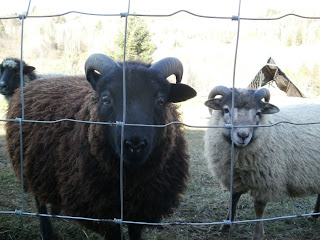 You all remember little Smokey.  (Formerly known as he's-not-named-Smokey.   Because he so totally is named Smokey.) 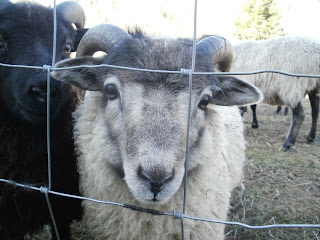 And a side-view of his snazzy little horns: 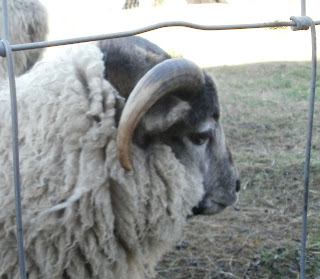 And this little guy is now known as Sauron.  (Only because Beelzebub is too hard to say when you're chasing him through the garden...)  Actually, he's a little sweetheart, who loves to be petted.  Just don't stand between him and the food.  Just sayin'. 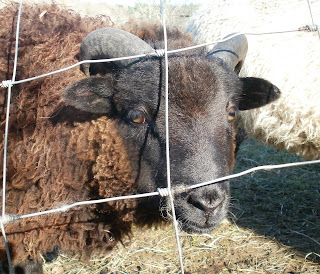 And here are Onyx's other two lambs.  The one on the left is the one Madman named Abigail (formerly known as the Spotty One), and the other one is Tiny.  She was the smallest of the three lambs, and in my efforts to not name her, I started referring to her as 'the tiny one', and somehow that became her name.  (Names are such a tricky thing.  Even when you don't name things, they end up with names anyway.  Hmmm.) 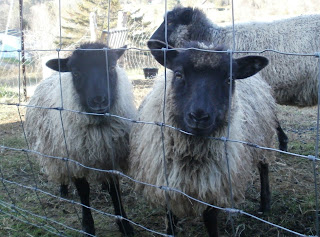 Check out the crimp in Tiny's fleece: 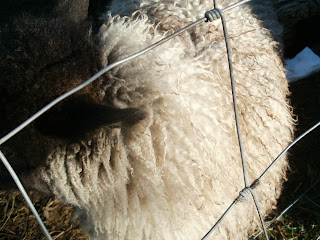 Just makes you want to squish it, doesn't it?

And I have to share a sheep story with you.  When the meter-reader comes to our house, he has to walk between the sheep pen and the house to get to the electric meter.  When our sheep see anyone in the yard, they go nuts, since in their not-so-humble opinion, the only reason for humans to exist is to feed sheep.
The last time, I happened to be home when the reader arrived.  He must have been a new guy, since I'd never seen him before.   The sheep went on Full Alert the minute he hit the top of the driveway, and started sounding off as soon as he opened his vehicle door.
"Hey!  Human!  Human in the yard!  Hey!  You there!  Yeah, you!  Feed us!  We're hungry!  Really!  They never feed us here!  It's been days!  Or weeks!  Or maybe months!  We don't know because they won't let us have calendars!  But it's been really really really long!  Really long!  Food's in the can over there!  Hey!  Poor starving sheep here!  Hey!"  All six of them were blatting their heads off at the poor fella.  He strode dutifully down the path to the meter, glancing over at them a couple of times.  I don't think he spoke 'sheep', so the expression on his face could best be described as 'WTF?'  When he was almost back to his car, he stopped and stared at them for a minute.  The sheep were totally batshit by this point, because he had walked right past their food can without feeding the sheep!
I'd been watching through the window the whole time, and at this point I was laughing so hard it was hard to stand up.  I don't know if he thought they were going to jump the fence and eat him, but he sure did have a sheepish (sorry sorry sorry - you know how I am) look on his face.

I imagine he's used to barking dogs in his profession.  But I don't think he was prepared for a bunch of raving sheep.

Yesterday was the last Jury Draw of the three that I have to serve.  (In Vermont, you have to do three jury draws or three juries, whichever comes first.)  Since I wasn't selected for a jury at any of the draws, I'm officially done.
I never even got called up for voir dire, which is where the judge and attorneys ask questions of a group of 24 people, chosen at random from the pool, in an effort to find 12 people (+ 2 alternates) who will form an impartial jury.  Since those of us who aren't part of the 24 are out in the audience, we get treated to a little bit of free theater.  (We're supposed to be paying rapt attention to all the questions, since a bunch of the original 24 can be rejected, and they'll call some of us up to fill the empty spaces until they end up with the final jury.)
The questions range from whether or not you know, or are related to, any of the people involved in the case, including the judge, the attorneys, the witnesses, or the defendant, to what are your attitudes toward various things that might be part of the case.  (One example of the latter from last month's draw was an examination of people's feelings about logging.  Really made me curious about the case...)
Our small town-ness really gets exposed during the questions about knowing or being related to people involved in the case.  There are always a fair number of folks who went to school with one or more of the principals, or are related one way or another.  "Well, Dr. So-and-So is my first wife's cousin, and the defense attorney got my best friend off on a...  ummm... charge.  Of some sort.  Ummm."   "That Trooper So-and-So is the one who showed up when the drunk skewed his truck through my front yard, and I wasn't happy with the way he handled it at all."   Like I said, a little free theater.
My favorite, however, is one from yesterday.  One woman, when one of the attorneys asked if anyone had any kind of relationship with the attorneys on the case, piped up "Well, I don't know if it's a relationship or not, but my current boyfriend is the ex-boyfriend of your current girlfriend's daughter.  Does that count?"
Yeah, small towns...