Yesterday was chicken butchering day. Forty-two birds went from pasture to freezer.
And, no, I didn't take any pictures. It was waaaay too gory. Thirteen hours of blood, guts, and feathers.

I don't even like to do anything fun for thirteen hours straight...

It would have gone faster if we'd gotten all the helpers we were expecting. But what did we expect?
I will say that the crew who did show up qualify for sainthood. Anyone who can stand and pluck chickens for thirteen hours should be canonized on the spot.

Our front yard looks like there was some kind of cosmic pillow fight.
I have a blister on my thumb and an ache in my back.
But there are several happy families who have chickens in the freezer right now, and that makes me happy.

And damn it! That chicken tag just got more action.
Must. Knit. Faster.
Posted by gayle at 9:34 PM 7 comments:

If Silence were Golden, I'd be all yellow and shiny by now...

Busy busy busy. Animals, the garden, work. With the added bonus of visits from kids and grandkids!

The meat bird roosters are now old enough that they're trying to crow.
Picture the sound of a large rusty hinge crossed with a squashed bugle.
Going errrrh or errrk-a or errrrh-errrrrrrh.
Now multiply by about 20.
Yeah, interesting...

I'm still chugging along on Goldie's fleece. Last time I weighed the bumps of carded roving, I had 1.7 pounds, and I've added to the pile since then. I'm sincerely happy that I've got the drum carder up and running again. The last serious amount of fleece I carded was the Cotswold that I did with hand cards, and I swore never to do that again.
I have it in mind to make a sweater. Maybe something cable-y. If I make it big enough to fit Madman, he'll think it's for him and be happy, and it'll still only be a little bit too big for me...
Posted by gayle at 6:59 PM 3 comments:

Yeah, I'm shocked, too.
Two and half years of the same template, and today I get a bug up my ass to change things around.
Maybe it's the blog equivalent of spring cleaning?
Maybe I should now go and chase out some of the dust rhinos that live under the furniture.
Naw.
Knitting beckons.
And, besides, I just noticed in my tag cloud that chickens have overtaken knitting again. Must knit so I can remedy that.
That's going to be my excuse, anyway.
Posted by gayle at 12:17 PM 9 comments:

Yep, we're at it again 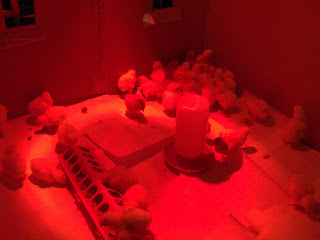 For those keeping score, this is our third batch of chicks for the year. (And the last, thank goodness. Love the little peepers, but the dust and the smell...) 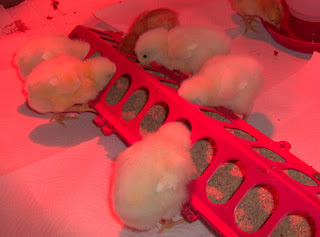 Our first batch was the hatch from the incubator, which ended badly. We now suspect it was a raccoon that got our little cuties, though Madman has twice spotted a fox lurking in the area. (The first time, he went charging out the door with a .22, scaring it away from the main chicken yard fence that it was checking out. He managed to get off one shot as the fox headed back to the woods, but even Madman couldn't hit a fox with a .22 while at a full gallop. (Both him and the fox...)) 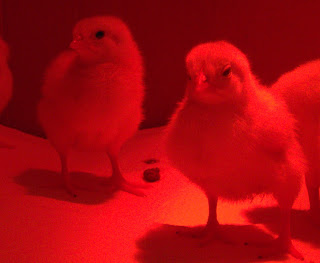 The second batch of chicks - the largest - is now happily living in a nice yard of their own. Madman has a trap set near their fence, just in case the fox makes another appearance. 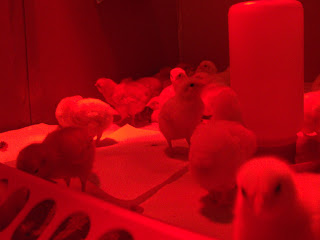 This batch consists of 30 more meat birds, some of which will end up in our own freezer later this summer, and a dozen Buff Orpington girlchix* who will be added to our laying flock. (And hopefully, this time they really will be Buff Orpingtons, rather than the interlopers we were sold last year under that name.)

*We wanted straight-run chicks, but that wasn't an option from the feedstore through whom we ordered the chicks. Given the problems we've had getting chicks through that feedstore, I doubt we'll be doing any future business with them anyway. (Things like closing down order-taking 4 days before their stated deadline without giving notice, wrong breeds, wrong delivery dates, etc, etc, etc. Not.Happy. Though their customer service has at least upgraded slightly from their original stance of Sucks-to-be-You.)
Posted by gayle at 11:14 AM 5 comments:

I wish I had something interesting to report.

But, I don't.
I'm still washing and carding Goldie's fleece, little by little. I wash three or four batches at a time, defining a 'batch' as about what I can stretch out on a 12x12 wire mesh screen - thick enough to be worthwhile but thin enough to dry in a timely fashion.
I've got enough bumps carded now to fill a good-sized trash bag, and I'm only about halfway through the fleece. Once I start spinning, I know it's going to be agonizing to have to stop and wash and card again, so I'm trying to exercise a little self-discipline and prep the whole fleece. Or at least as much of the fleece as I can bear to put off the spinning for. (It's getting really hard. I had to hide my wheel in another room, to keep from starting the spinning. Hard, I tell ya. Hard.)
I'm picking out heaps and heaps of VM. (All I can say is, Goldie is a very nice sheep, as sheep go, but she's at heart a filthy beast. I don't even want to think about what she spends her time rolling in...) I pull out what I can as I wash it. At first I was telling myself that by doing that, I was saving time later on, but then I realized that pulling out 89 bits of hay was the same amount of effort, whether now or later. 89 bits is 89 bits. Finally, I comforted myself with "Anything I see now is something I don't have to hunt later" and then it all made sense.
Maplewing carries on. A bit larger than the last photo, but one puddle of unblocked lace looks pretty much like another puddle of unblocked lace.
We're eating salad out of the garden, now - the lettuce has started to catch up with the spinach, so there's a little more variety. Radishes and homemade croutons for a little texture, and life is good.
And if I can ever remember to buy new batteries for the camera (just because an item goes on the shopping list is no guarantee that I'll actually find it in the shopping bag when I get home...) I'll try again for some pictures.
At least with an all-text post, you can get in a little extra knitting before you have to nudge the mouse.
Posted by gayle at 7:48 PM 5 comments:

My camera and I are having a difference of opinion

I think it should take pictures of things I want to take pictures of. It thinks it doesn't necessarily have to do that.
I think it's in a snit because I forgot to use it at NH S&W.
Or not.
I'm getting a lot of redscreens with "Error saving image" messages.
And it's not helping that my rechargeable batteries are becoming increasingly reluctant to hold a charge.

I went out in the drizzle today, and took many many (many) pictures, and here's all I got...

I wanted a good picture of Goldie, because we think she might actually be with lamb. She's getting that mid-pregnancy "dumpy" look. (I remember it well...)
But I had a hard time getting a shot. If I had a good one lined up, she shifted around before the shutter could go off. Or I got one of those damned redscreens.
I threw some treats on the ground, hoping to distract the younger set - which mostly worked, they being as distractable as you could hope - but Goldie wouldn't turn. (Well, at least not for this one.) 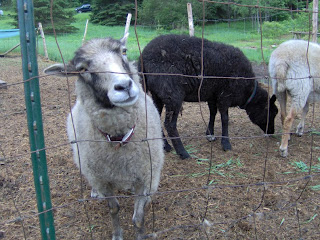 Another time I had a good view, but Merlin popped in at the last minute... 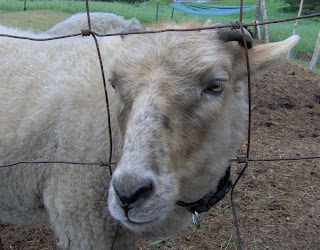 This one was the only other shot that came out - and it sort of shows what I'm talking about. 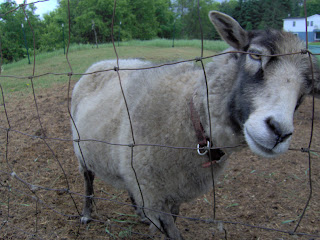 And as long as I was walking around in the drizzle anyway, I tried for a few shots of the chickens. This is the meat bird's yard - our little RIR hatchlings are back in with them, now that there's so much more room. 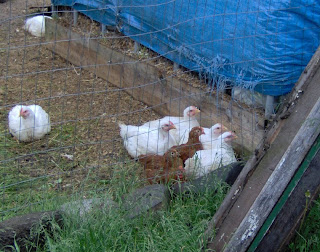 These chickens are taking turns having a dust bath. Unfortunately, since it's been raining, it's really a mud bath. They're really not smart enough to know the difference. (The leftmost bird is actively rolling and scratching. The one on the right is pretty muddy. The one in the middle seems to be patiently waiting her turn.) 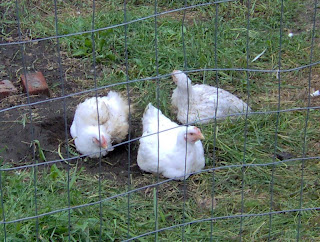 And, oh yeah, I knit, too. Maplewing is still in progress. At least the rows are going faster now, as the decreases really start to add up. 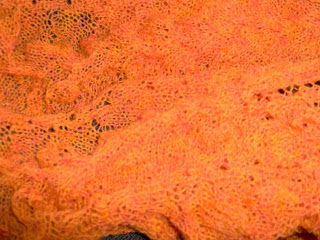