Just a quick post to let y'all know we're okay. We personally had no storm damage, but our internet has been down until this afternoon. And that was the worst thing that happened to us, other than the beer store being closed on account of high water...

The chicken yards give a whole new meaning to mud... Trying to walk out there will suck the boots right off your feet.
And the sheep are still damp and bedraggled.
The garden is fine. The animals are fine. And we're fine, too.

And now with internet! I'm probably about 900 posts behind on Google Reader...
Hope I didn't worry anyone too much. I ended up feeling guilty for having no internet. Modern times...

The media has everyone so panicked up here that everything is getting cancelled - the county fair will be closed tomorrow, the local college put off starting classes from Monday until Thursday, every event/meeting possible is being postponed.
The local electric company has announced that if power is lost, they refuse to even consider going out to fix it before Monday.
All the stores are out of D batteries and nearly out of flashlights.

And we haven't had so much as a drop of rain or a breath of breeze, so far.

There are a lot of mountains between us and the coast. I'll be very surprised if we get more that a bucket of rain.
And as for the power going out? This is the Northeast Kingdom. We lose power if anyone even whispers the word 'storm.' We're used to it. Those of us who have lived here for a while know enough to keep a ready supply of candles and batteries on hand.
If you don't hear from me tomorrow, I'll just be up here spinning by headlamp, waiting until Monday when the power company guys dare to go outside...

Have Hub, Will Travel


A quick visit to Radio Shack on the way home (my only nearby source for computer bits) put an end to my plug-unplug-plug-swear-unplug-swear-plug antics. Hurray for hubs!
And now we return to our regularly scheduled blithering...

So.
In early August, I made a trip with my youngest daughter to upstate NY to visit my dad. My oldest daughter, son-in-law, and grandkids drove up from Florida to be there at the same time. (And not-coincidentally, it was my birthday. A very happy birthday for me, to have both my daughters with me at the same time!)
Daughter-the-younger and I arrived the day before the rest of the crew, so we had a chance to settle in and check out all the cool critters.
There were freshly sheared alpacas 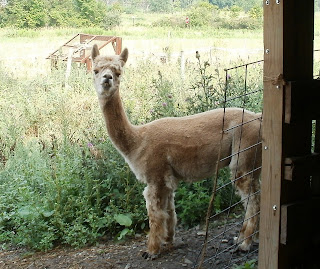 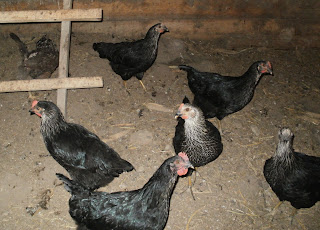 And piggies! These are either a week old, or two weeks old. (I got confused after a certain point. There were pigs everywhere - multiple litters in multiple colors in multiple barns.
My favorites are the polka-dotted ones... 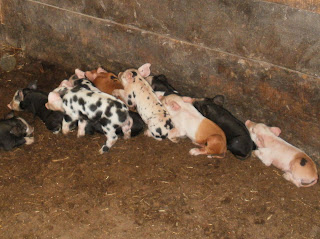 On Sunday, while we were waiting for Older daughter and Co to arrive, we had some big excitement. Dad has cameras on several of the pens, in order to keep track of what's going on out in the barns. One of the young sows (who wasn't really due for another couple of days) was in labor and had already had two piglets. Which she was chasing and trying to bite. Naturally I grabbed my camera and headed out to the barn with the rest of the troops.
As a first time mother, she was irritable and confused. Here she was, hot and in pain, and suddenly there were these pesky things that were plaguing the hell out of her, snuffling and nuzzling and squeaking. We finally had to pull them from the pen, because she was too agitated to do anything but stomp around and try to boot piglets. Once they were gone, she settled back down and laid down again.

After about half an hour's wait, Piggie number 3 made an appearance. 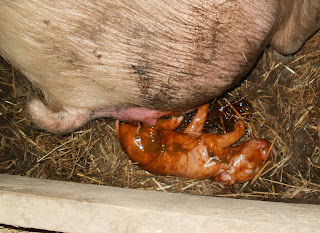 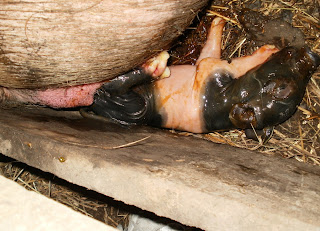 By this time, she had her butt up close enough to the wall of the pen that I was afraid the babies were going to be born with concussions...
As each piglet was born, my WickedGoodStepmother would give it a chance to try to nurse, until mama pig got too agitated, then would rescue it and drop it into the bin we'd set up for the babies' protection.
These little squirmers are all looking for something - they don't know what it is, but they're sure they'll know it when they find it. They're sucking on each other's noses, tails, and ears, because Mother Nature had promised them that there'd be food. Gives a whole new layer to "Got Milk?", doesn't it? 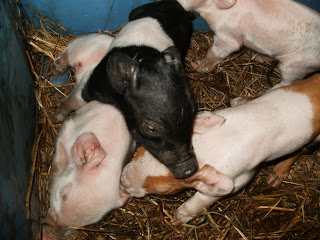 Older Daughter & Crew arrived about that time. The grandkids were fascinated by the bin full of baby piggies. 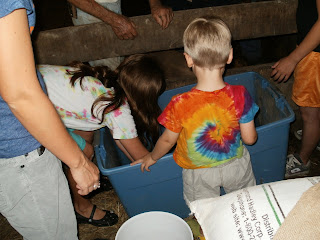 The count mounted. Here we are at seven. I love the variety. 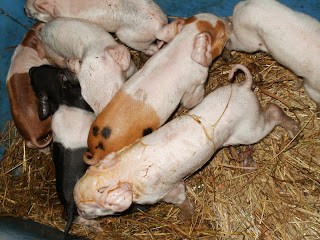 After about the 10th one, Mama just didn't give a shit anymore. So we pulled them out of the bin and returned them to her, where they proceeded to clumsily look for spigots. 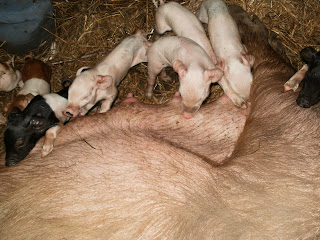 This little guy finally figured it out. 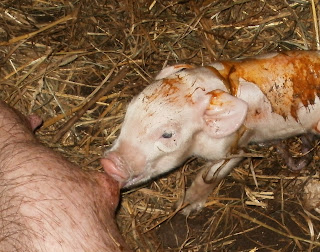 And eventually, so did the rest of them. But by that time, my camera's batteries were out of juice...
*sigh*

Sending up a flare...

Urgh. Since I got back from my mini-vacation at my Dad's, (I've got pictures! I swear! Grandkids and flowers and baby pigs!) we've had nothing but computer problems. First Madman's computer picked up a virus which necessitated reinstalling Windows (and it's Vista. Weep for me...), then all the rear ports on my computer went on strike. So, we're in the process of re-installing software on the newer computer, and I had to get a USB keyboard for the older one, and since there's only one USB port on the front of it which has to be shared between keyboard and mouse, doing anything on it involves a lot of swapping and swearing.
As soon as I can figure out what to do with either computer, I'll process a ton of photos and pop them up, along with commentary about all the fun. (I've got pics of baby pigs less than 3 seconds old...)
In the meantime, I'll just be over here, inventing new curse words. The old ones just aren't enough anymore...