Onyx is a filthy beast

But we love her anyway.
I decided it was about time I did some fleece-washing.  I'm currently plying this pretty stuff  (after seemingly endless spinning of froggy singles) and I'll soon be ready for a big spinning project.
But oh, my... 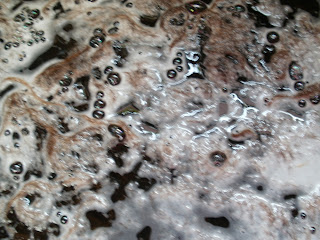 Pulling the fleece back, you can see that the water is almost as dark as the wool. 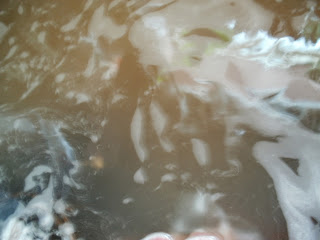 Multiple rinses were called for.  Multiple.

I tried to get a shot of the unwashed fleece itself, but all the pictures came out like this: 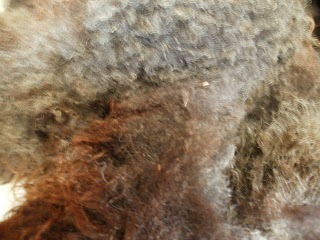 way too light.  The fleece is mostly black, with reddish brown tips, and is laced with several shades of gray ranging from silver to almost white.
So after a little monkeying with the color saturation and the brightness, I've got this picture which is a little more true to color, though still missing most of the black. 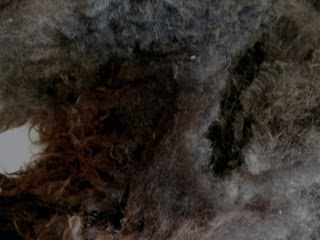 I can't wait to see what I get when I start carding and spinning.

First, of course, I have to patiently wait for the drying...
Posted by gayle at 4:08 PM 4 comments:

I may be spending too much time with my Kindle...

I was reading a library book this morning - Neil Gaiman's Fragile Things - and reached a stopping place.
I automatically reached for the bottom of the book to turn it off...
Posted by gayle at 7:52 PM 3 comments:

How quickly they forget...

Or at least I do.
I forgot my own blogiversary.  Jan 12 marked 4 years of happy blithering, and I missed it by a week. 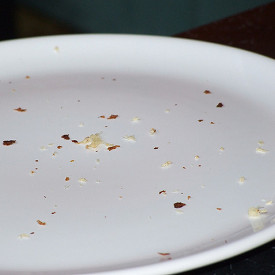 I had to go to work this morning, because retail and weekends-off have nothing in common.  Madman graciously started my car for me as he was out doing chores, letting it warm up while I finished getting ready.
Now, I seldom bother to zip my coat.  It's uncomfortable to drive with it zipped up, and since it's a quick dash from the house to the car, I usually just hold it closed for the 30 seconds necessary.
But this morning it was cold and, with a windchill firmly in the negative, I took the precaution of zipping up and donning gloves, knowing I was going to have to clean ice off the car before I headed out.
I chipped and scraped and grumbled the icy crust off, then hopped into the relative warmth of the car, reaching for the coat zipper as I sat down.  After fumbling for a moment, I took my glove off for better dexterity, and fumbled some more.
The zipper pull was missing.
I believe I said some bad words at this point.
I tried tugging on the zippy-runner thingy to no avail.  I tried pulling the top of the coat apart, hoping the zippy-runner thingy would just slide down on its own.
Nope.
There were a few more bad words.  They were louder, too.
I finally located the zipper pull in my lap, but it was too bent to stay in the little hole where it belonged.  I managed to pull the zipper open about 2 inches, but it wouldn't go further.  I needed 3 hands - two to hold the zipper above and below the pull, for leverage, and one to tug with.
I was short a hand.  Luckily Madman has some, so I trudged back through the snow and went in the house.

"Sweetie?"  I called from the door.  "Can you help me a minute?"
"Sure," he replied.  "What do you need?" he asked as he came toward me.
"Will you please get me out of my coat?  I'm stuck."
He had the good grace to only laugh once.  Love that guy.
He promptly zipped it up, losing the precious 2 inches I'd gained out in the car.  I'd been figuring that, worst case scenario, I could (with his help) pull the coat off over my head, but with it zipped all the way up, I was going to lose some skin off my chin.
While I tried to keep tension on the zipper, he tugged and re-inserted the pull and tugged and re-inserted the pull and tugged, until finally finally it zipped all the way down.
By this time, I was courting being late for work, so a big "Thank you!  Thank you!", a quick kiss, and I dashed out the door and out to the car.
I arrived with zero time to spare, instead of the comfortable 5-10 minutes I try for.
I'm still trying to figure what would have been said if I'd been late and my only excuse was "Sorry.  I got stuck in my coat."
Posted by gayle at 5:33 PM 9 comments:

Labels: blather, only me 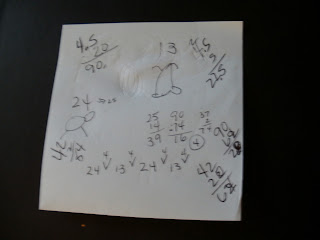 It all started innocently enough.  Madman was out of town (we'd been invited to friends' for a New Year's Eve party, but since I had to work, he'd gone by himself - hours away, so he'd stayed overnight.), so I did morning chores.  All quiet on the critter front.
I got ready for work and headed out to the car.  Goldie was blatting up on the hill, but she's always blatting, so I was ignoring her.  ("Hey!  Mama!  Hungry sheep up here!  We haven't had grain in at least half an hour!  Hey!")
But as I was starting the car, it started to sink in that she wasn't blatting "I'm hungry" - it was her "OMG, it's the End of the World!!!!" blatt.
I looked up the hill toward the sheep pen.
There was a sheep outside the pen.
And the gate was flat to the ground.
Orion, our newest sheep, our new little expensive registered ram, was outside the fence.  Standing in the garden.  Our new little difficult-to-catch-because-he's-sweet-but-dumber-than-a-box-of-rocks sheep is standing in the garden, and I need to leave for work right now, and I don't have time to deal with this.

Or words to that effect.  I may have been a little more vehement.

I sprinted up the hill, through the snow, in my running shoes, because after all, I was ready to go to work, so naturally I would have my work shoes on.  My worn work shoes with very little tread left on them.  Because I thought I was just going to go get in my car and head for work.

Naturally, as I scrambled up the hill through the snow, Orion dimly realized that he might have done something wrong.  He headed off around the pen, just in case he was in trouble.
I slowed down, trying to exude calm.  "Orion...  Come here, sweetie...  Let's go back in the nice pen.  There's a good boy..."

I grabbed the Big Blue Bucket that we feed him his grain in, opened the can we keep the grain in, and scooped some in for him.  While I was at it, I scooped some grain into the other sheeps' dish as well, just in case they were getting any crazy ideas about joining Orion in his adventure.  (They were still inside the pen, mostly staring wild-eyed and appalled at Orion.  "We're being good, Mama.  See how good we're being?  Not naughty like him.  Aren't we good, Mama?" )
I shook the bucket to make the grain rattle, trying to entice the little sweetie to come closer.
He wasn't buying it.  I don't know if he sensed a trap, or if he was just too dumb to make the connection between the sound of grain rattling in the bucket and 'hey, I could be eating grain.'
I advanced a few steps, and retreated a few steps, trying to get him to follow the bucket.  He did, but when he was almost within reach, he bolted again.
Lather, rinse, repeat.  Finally, I lured him close enough to grab hold of a horn.

I'm very glad we raise Shetlands, which are very small sheep.  Because a really big sheep would have dragged me even further through the snow than Orion did.

I was desperately trying to keep my feet under me, while he was backing up at a pretty good clip, shaking his head all the way.
He totally ignored me as I tried to explain that I really didn't have time for this.
I finally dug in enough to slow him down, and then inch-by-inch dragged him toward the still-open gate.  One last Herculean effort, using the gatepost for leverage, and I got him back inside.

A couple of minutes that I couldn't spare were consumed in Emergency Gate Repairs, and I was finally off to work - out of breath and my shoes full of snow.