Finally...
As in, finally I tried out my new picker. (Check out the link for full shots of the spiffy gizmo - I've only got closeups here.)

I grabbed some of Goldie's fleece that had been languishing forever. Well, at least since last month when I washed it expressly for trying out the new toy.

I loaded it up. 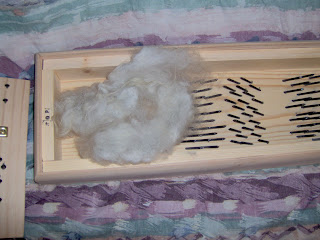 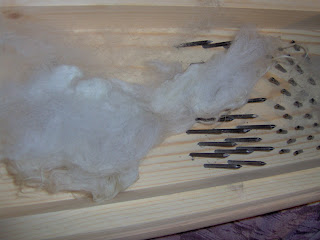 Ran the slider back and forth a few times. 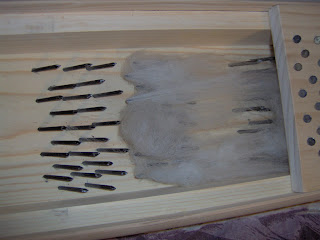 And a big ball of fluff comes out the other end. Amazing! 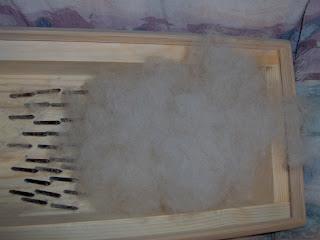 I ran it back for another pass. 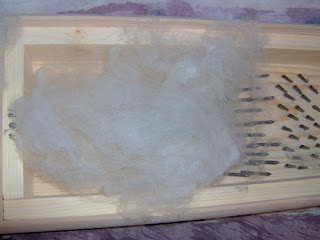 The verdict? It opens the fiber really really nicely, and gets out all the smaller bits of VM. Not so good on the big bits, but those are the easy ones to pick out by hand anyway, so I'm pleased. In a matter of minutes, I had a huge pile of fluff ready for the carder that was practically VM-free. (And if you've heard me whine about how full-of-crap my Goldie's fleece was, you'll know what a boon that is.)

View the crap left behind... 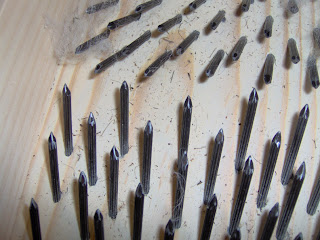 My favorite part is the cleaning instructions that came with the picker:
Turn it over and dump it out.
Posted by gayle at 11:23 PM 8 comments:

I actually got in around 9 o'clock last night, but was way too tired to talk, let alone post. Back to reality today, with a full plate at work, so I'm still tired.
But I had a great time, visiting relatives, partying with my dad for his birthday, and there was The Great Pig Chase.
A neighbor had dropped by right around dusk to let us know some pigs were out and wandering up by the road. We grabbed flashlights and ran out the door, my dad and I going one way, and my daughter and stepmom the other. Dad checked the barn as we went by, to see who was missing - Chunk and his two lady friends had apparently decided a post-supper stroll was a wonderful idea. I spotted fresh pig tracks in the driveway (not that I'm much of a tracker, but with recent rain and lots of mud, even I could spot the tracks) and had just pointed them out - "Look, there's pig tracks" - when I looked up and spotted pigs. "Look, there's pigs." I blocked one possible exit while Dad looped around behind them to urge them back to the barn. They trotted past me and I stayed to guard the rear in case they changed direction, joined by my daughter who had worked her way around by way of the road. But we figured they were headed back to the pen anyway, since they were happy to get settled back in their comfy quarters for the night. If the neighbor hadn't tattled on them, they probably would have gone back to their pen by themselves, leaving us with a driveway full of tracks and a mystery the next morning.
Herding pigs by flashlight - you just can't buy entertainment like that...
Posted by gayle at 9:12 PM 4 comments:

More on the hay sculptures

Apparently this is a much bigger deal than I realized.
Here's a link to some photos. I didn't see all of these, and I don't see a photo of the cows that I did see. (Well, I thought I saw cows. They sure looked like cows. Well, I sure thought they looked like cows. Maybe they weren't cows at all...)
Posted by gayle at 11:22 AM 3 comments:

September is kicking my ass

So much to do, between the garden, the animals, getting ready for winter (sigh), even without the spinning and knitting.
I'm not only behind in posting, I'm behind in my blog reading. (Bloglines informs me I have well over 800 posts to read...)
So, naturally, I've gone on vacation.
I'm currently visiting my dad, relaxing, recharging my batteries.
I'll try to post a few notes from the road, but be warned that I forgot the camera.
I really really would have liked to get some photos of the latest fad around Killington - hay bale sculptures. Teddy bears, cows, jack-o-lanterns. And penguins. You haven't lived until you've seen a family of hay bale penguins...
Posted by gayle at 1:43 PM 5 comments: