It occurs to me that I haven't shared a picture of our new rooster. He was a gift from Madman's folks - they'd bought some straight-run New Hampshire Reds and had an overabundance of roosters. This guy was too pretty to go in the freezer, and since they already had plenty of roosters to keep their hens giggly, they passed him along to us. 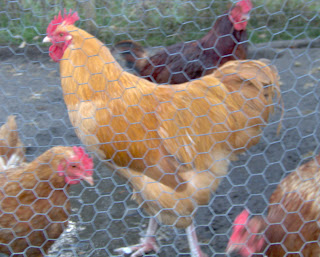 Standing behind him is a young rooster that we hatched ourselves last spring - one of the few survivors of our incubating efforts. (I was going to post a link, but it made me too sad.)

So far we're calling them New Rooster and Little Rooster. Not inspired names, but descriptive.

And I might as well throw in a view of some of the Not Buff Orpingtons while I'm at it. 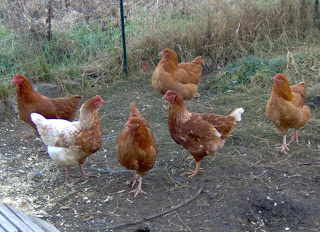 The neck feathers on this one are amazing. They're white with the edges tipped in brown. 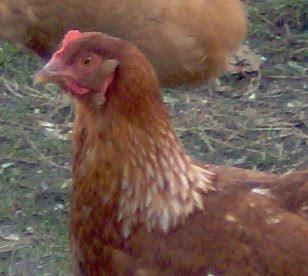 And here's one of our older hens, molting. Because the best time to let all your feathers fall out is in November in Vermont. 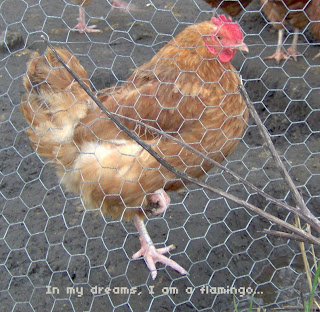 Your molting bird is proof of chicken intelligence. ;)

Does this mean, contrary to Farmer's Almanac predictions, we won't have a bad a winter?

"In my dreams I am a flamingo."

Are you going to knit that little hen a sweater to keep her warm? ;^)

I wonder if they are Isa Browns?

That, or the rare Reddish-White Orpington.