Since I had today off and Madman is feeling more mobile, we butchered a couple of chickens this morning. They were some of our remaining meat birds that had gotten a reprieve when Madman slagged his knee, due to the fact that neither one of us was capable of carrying a madly-flapping well-over-10lb bird*. These are some big honkin' chickens at this point. Picture a blimp with feathers. Picture a blimp with feathers taking 5 minutes to turn around 180 degrees, with little tiny shuffling steps. Big honkin' chickens.
One is in the freezer and the other is in the oven. Full of stuffing. The house is starting to smell really good...

The twitchy fingers are due to this: 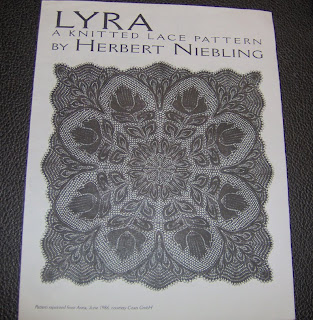 I soooo want to cast on. This very minute. Like in now. If I could type and cast on at the same time, I'd have needles in hand.
(I'm still trying to decide if I want to let my innate stubbornness win and finish the Frosted Ferns that I've started (and tinked and knit and tinked) or if I should let my sensible side reign and just chuck the whole project out the window.)
The Great and Powerful Cookie took pity on me as I beat my head on the chartless Niebling and passed along a Niebling that is less likely to land me in the Loony Bin.
She's one of my very favorite Imaginary Friends... (I was once trying to explain to my mother about friends that I'd made on the internet, whom I've never met in person, and she said "So, basically they're your imaginary friends then." Never argue with your mother. (You won't win, anyway))

*These birds dressed out to over 10lbs. Picture a small turkey. We have no idea what they weighed before we removed all the unnecessary bits...
Posted by gayle at 6:53 PM

Knitting without a chart??? You crazy lady. I can't even read a chart so what do I know!

Chuck it and start Lyra. You know you want to *g*

We are having chicken tomorrow but it's a measly 5 pounder.

Having words with Ryan about this. Maybe you'll raise our chickens next year?

Last night we went out for pizza at a local bar/pizza joint/pool hall. Smokey stopped in the *foyer* to read the for-sale notices and came in to tell me someone is selling all-natural chickens. This is a major, major step for him (I don't think he has any idea of how much cheaper factory chickens are.) But I'm gonna go with it!

That's got to be one of the most intriguing post titles ever! For the record, the Knitting Doctor's husband calls all of us her imaginary friends too.

That was some title :)

Knit without a chart? Why? (I just charted out the Basketweave Scarf from Knitting Daily - because the directions were driving me nutso. This isn't even in the same universe with Niebling.)

If *we* are imaginary, maybe Frosted Ferns is too.

Niebling is not Niebling if there is no chart.

Multipost comment. Those are some big chickens! I can almost imagine the yumminess of the smell in your kitchen...as an imaginary friend. :D Lyra is going to be pretty! Thinking of no chart makes my eyes hurt and that little number in your "0" just reinforces that notion.