Stars and Snails and Monkey Tails

I've been puttering with fabric for the last couple of days, as I do.
Katie's Star Patch is laid out, ready to start the basting. 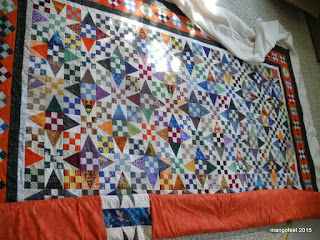 By the time I got this far, my knees were done, so I creaked to my feet and figured I'll continue another day.  I have a gardening kneeler that I haven't used, so I think I'll hunt that up when I'm ready to baste.  (I've never used it because I didn't want to get it dirty.  Yeah, I know.  On the other hand, I've never kneeled in the garden, either, since I don't like getting my knees dirty.  Squatting works just fine for gardening.  Not so much for basting.)  (Obviously I was saving the kneeler for this basting job.  That's it.  Perfectly reasonable.  See?)

It's been long enough since I did any machine quilting that I don't have a lot of confidence in my abilities.  A little practice is called for, so I pieced a doll quilt top from some nine patch blocks that were left out of the Star Patch (too bright red!), and that'll be my first victim warm-up. 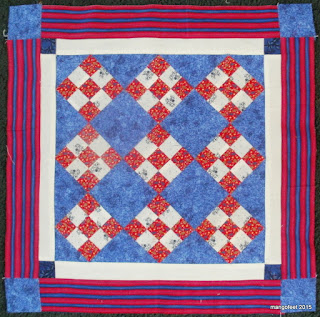 I've also got a Bear's Paw crib quilt that I pieced back in the late 70's and never finished.  (It's mostly brown.  Some orange, but mostly brown.  I don't know what I was thinking either.)   It'll be experiment #2.  If it continues to be hideous   ugly   sad unfortunate, I'll just quietly bury it out in the cornfield and no one will be the wiser.

And since I have all this free time since I'm done piecing blocks for Garden Party, I've been playing with scraps.

Recently I saw a Snail's Trail that I admired, and I remembered that it's one of the quilts I've always wanted to make.  So I put a couple of blocks together.
Yeah, they're fun.  Not Hot Cross Bun fun, but still fun.
I did these yesterday. 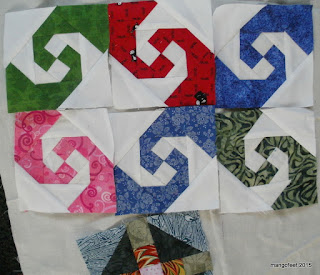 Pay no attention to that monkey that's photobombing.  I've found it's best to just ignore them.

Today I made a couple more 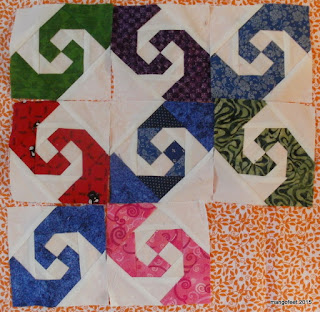 including this scrappy one, just to see what it would look like. 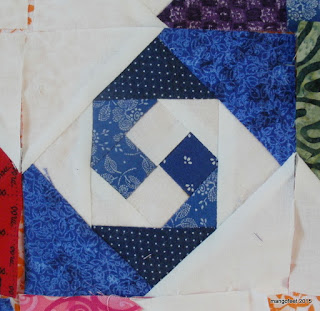 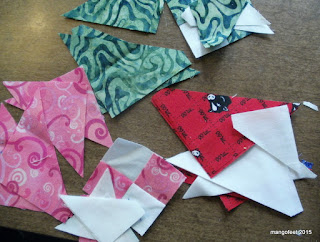 And then.
Then.
The other night, I saw a stunning quilt made of Ohio Star blocks.  Only, unlike my blocks, the darks and lights were reversed.
I had to make a couple.  You know how it is. 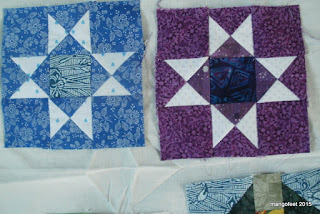 Ignore the monkey.  It's just trying to show off.

And since I made two, I had to make a couple more, right? 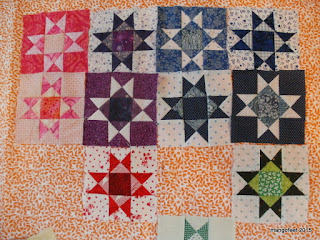 I like them.  A lot.  Especially mixed in with my other Ohios.
Good thing I like making these stars.  I don't think I'm going to be able to stop any time soon.

By this time, all the monkeys were just screaming for attention.
So I gathered up all I could find and laid them out. 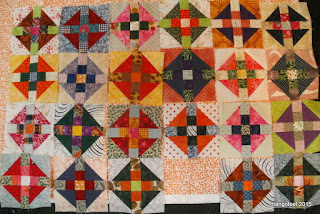 Twenty-three of them have managed to sneak in.
Which leaves a gap in the bottom row.  Can't have that.
I 'located' another one. 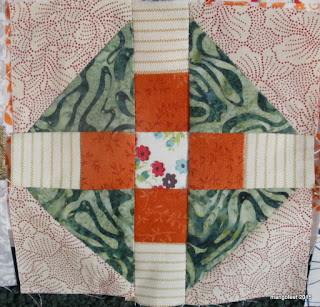 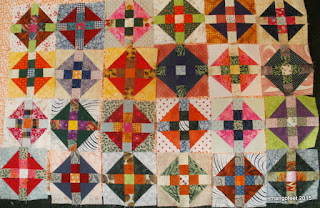 I still haven't figured out how they're getting in...


Linking to Mrs Sew and Sow's Scraptastic Tuesday.  Come see all the pretties!

Love the alternating light/dark background Ohio Stars. I think dark background is the traditional way, but alternating really works well. Snails' Trail is a fun block. On my list. The list that I'll have to live to be 300 in order to finish.

You might consider Tai Chi. There is a move "ward off monkeys" in it.

yup! I think a snail trail may well be on my 'in the future when I'cve got time' list.... Who am I kidding? time? When will I ever have time???

Will definitely look forward to your tute for the little snails trail!

I one of my books is an Ohio Star in yellow and white. It's stunning and would be even more so with the colors alternating. Come to think of it, maybe they are .... I need to look for it.

Make those monkeys stand on point; that'll tame them.

Are there holes in your screens? Well, you DO have screens, right? LOL!

The snail's trails look too hard to make. Maybe your tutorial will change all that, I hope. Please remember that I only have one brain cell that I must share with Husband Wonderful. Today was his day to use it.

Oh I love your Snail Trails blocks. They are so lovely. I think it will be my block for RSC2016! (Yep, planning ahead here!!) The Ohio Stars are gorgeous too. Can't wait to see more of that quilt! You have so many blocks made already with so many different project. My! You are so quick. Love them all.
P.S. Don't leave the bananas out on the countertop! LOL ;^)

Ok. You answered that question...what is Little Gayle made of???...Stars and Snails and Little Monkey Tales. You are made of some gooooood stuff.

Wow! You have some fabulous projects going on here!!! I quilt crawling on the floor quite a while ago. I splurged on 2 fold up tables and now baste standing or sitting. Takes up most of my living room so it's a get it done kind of project. ;)

Once again, your writing cracks me up! (Those darned monkeys...)