So every Saturday, I check out the fun at soscrappy, home of the Rainbow Scrap Challenge.  Everyone has been having such fun since the beginning of the year (and some have even been doing this for several years!), working with whatever color Angela has announced as the color of the month.
I first discovered Soscrappy in late February, so I was already too late to participate in this year's festivities.  Or so I told myself.  But it looks like such fun...
So I got tired of standing with my nose pressed to the window, watching all the other kids have a good time.
I've been wanting to make myself an Ohio Star quilt for a while.  No time like the present, eh?
July's color is red.  I like red.  I have red.
So I jumped right in with a red Ohio Star.
Ooops... 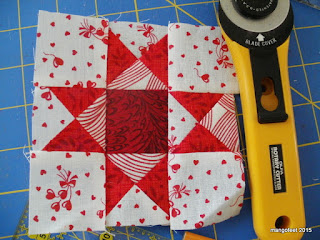 After a quick visit from the seam ripper, I put it back together correctly.  You know, just for grins. And one red Ohio Star would be lonely all by itself, so I quickly made another. 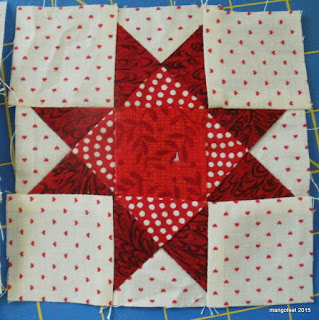 And then I thought about trying to catch up.  I'm only 6 months behind, after all.  I remember one of the months was dark blue.  (I think it was January.)
So, a couple of stars for January. 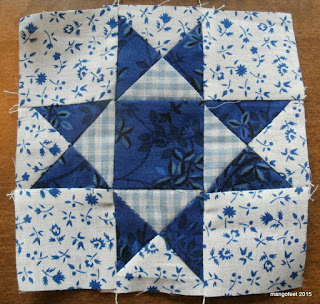 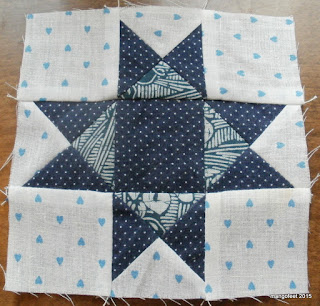 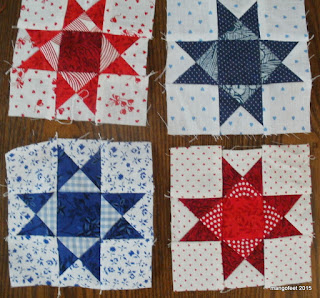 These little sweeties will finish at 4.5", and it's likely I'll make a few more for each color if I do actually catch up.  (Hey, it could happen!)  I'll have to pull some light blue, green, purple, and...  hmmm.  Pink was one (and since I've been working up a fair tolerance for pink lately, that should now be doable.) and there's one more.  Yellow?  I'll have to go look it up.  (Aw, gee, I'll have to go look at quilts and quilt blocks?  What a shame...)  So, here I go, playing with rainbows.

As long as those sneaky little monkey wrenches don't run off with me.  I swear I only meant to kit up one more block.  You know, just to have it ready for when I might start that quilt.  You know, that quilt that I might make but I haven't really made up my mind.  Yeah, that quilt. 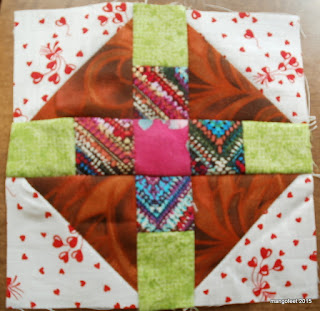 Hee hee, block making is so addictive when you're on a roll!! Good for you, you made the most of it. The monkey wrench is so sweet!

It's never too late to join up with the rainbow scrap challenge!! Go Gayle! Those Ohio stars are cute.

Since I made my monkey wrench quilt I've been tempted to make another. Those little things are soooo addictive and a great use of scraps. I made mine during RSC and used the color of the month for the HSTs. My 2.5 inch scrab bin is still strangely full.

I'm behind in Flamingos too so we'll both catch up! No rush, take your star time. There was purple, pink, light blue, can't remember now... green? Make lots of teensy little stars and we'll come ooooh and aaaaah at your choice of fabrics. I liked the squigly line in the first star, rip rip yea!
LeeAnna

Not quilting, but knitting mitered squares is a bit like that. What shall the next one be? How can I make this even more fun?

Hilarious. And I totally can relate. I am doing the Rainbow Challenge for the first time this year too! I am doing cows as is LeeAnna--when I saw her cow block for January, I was like, I'm IN!! A quilt for my aunt who turns 75 in December. So, I should have 6 even 7 cows now right? nope. Only 3. Didn't have yellow scraps in FL, which was April's colour, and there the cows have sat, well, stuck, on my design wall. I told myself this weekend I am catching up, since she just announced July (red). I love your Ohio star blocks. Stars are my favourite, always have been and the Ohio star was one of my first blocks ever made. Love your fabrics.

The rainbow scrappy challenge really sneaks up on you. And I use my seam ripper a lot! This morning my owl needed beak surgery because its beak ended up by its belly instead of the head.

So happy that you have jumped in. Thinking of you sitting there with your nose against the window is sad indeed. Joining into the festivities is so much more interesting! If you don't get all "caught up" this year, just remember that carrying things over to next year is perfectly acceptable.

Love your Ohio stars! And who says you need to "catch up?" Just start anywhere and go from there. Bet that's going to be a great quilt!

Red, white and blue - I see a theme here. Lovely Ohio stars and so tiny! Never too late to start. I just read for a few months when I discovered so scrappy but this is my third year participating and it's always like Christmas when Angela reveals the next colour. So much fun digging into the bin and finding those bits that become something!

Beautiful blocks. You have a lot of time to catch up. This is a fun challenge. Once you start playing, you can't stop.

Looks like you're having fun and that's most of what the RSC is all about! Your Ohio Star blocks look wonderful - can't wait to see what other fabric treats you'll be sharing with us.

Ohio Star is a great block choice! So glad you decided to jump into the challenge. It is very addicting... and you've got the colors correct!

Your Ohio stars are great. You will find yourself catching up soon.