Because nobody enjoys a good dither more than I do...

It's never too soon to start dithering over the setting for a quilt, right?  Even a quilt that I'm not officially making.  Because sooner or later, I'm going to start making this quilt, and it would be good to have a plan.
Yeah...
So, last post, I'd tried laying out the blocks on a scrap of red. 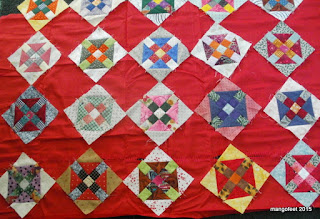 Responses were mixed and about evenly divided.  Some liked the red, some didn't.  (I actually have an ulterior motive for wanting to mix red into these blocks.  All shall be revealed in time.)
I'm not really knocked out by the alternate red blocks, so I tried a few other settings.  You know, as long as I was playing with monkeys anyway. 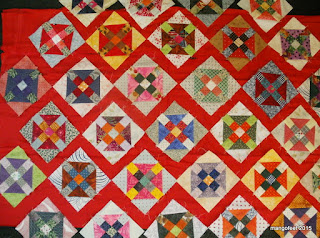 Though I think I like the up and down zigs better than the horizontal ones. 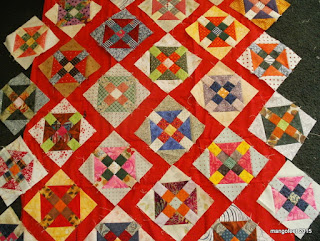 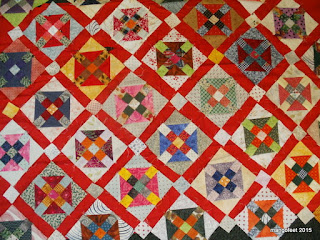 Though I definitely like the on point set better than a straight set... 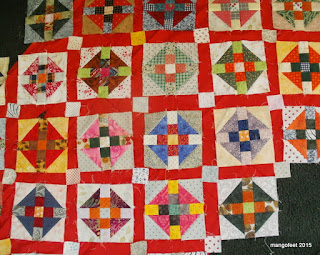 Though, Cathy reminded me that just setting them next to each other on point looks pretty good, too.  (Go see her version.  Right now.  I'll wait.  I had forgotten how much I loved it until I went and looked at it again.   My favorite version of Monkey Wrench EVER.)
So, I tested that out, too. 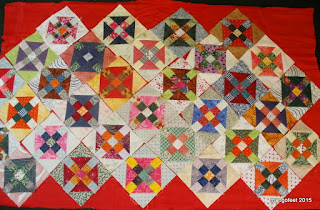 With red side triangles, of course. 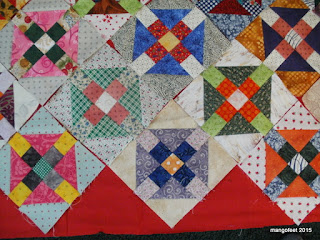 One of the big pluses for this set is that I'll need lots and lots more monkeys, since it will be solid monkeys.  (All monkeys, all the time...)  I've grown quite fond of the little monkey blocks turning up here and there.  (And there.  And over there, too.)

So, a lot of food for thought.  I'll be able to keep up the dither for a good long time!

And while I was dithering, I threw together a few more Ohio stars, since I'm still playing catch up with the Rainbow Scrap Challenge. 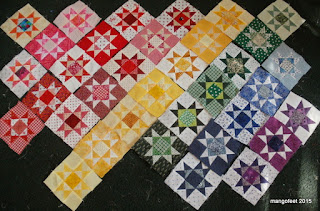 It's beginning to look a lot like a rainbow...


Linking with Oh, Scrap!  Where there's more fun than a barrel of monkeys.

Yes,the monkeys with a little bit of red is MUCH better. You did an excellent job at catching up the rainbow challenge too. Enjoy the brainstorming. ;^)

Great choice! Although I do like the red sashing on point as a second choice.

Ohio Stars is going to be an awesome quilt too.

On point, with sashing, on red. There. I.Have.Spoken.

Wonderful post... it's great to see all those possibilities! I do like the last option- all together with red triangle borders- or, like the others on point with red sashing. Look forward to seeing just what you come up with! I'm kinda keen to make me some monkeys too now!

I love pondering layouts. Sometimes you just need to let it sit for a day or two until the right layout reveals itself. I am just happy your are sticking with the red....I love it!

Thanks for sharing with Oh Scrap!

I love how you tried so many different settings! I vote for Photo number 4! But I think no matter what, it will be scrappily beautiful?

Red, red, red! Yummy! I do like seeing your processing as you play with the monkeys. Then my single brain cell gets tired. LOL!

You have a lot of great setting options! I think the dithering is an important step. Don't have to rush it.:)