So where's the tinsel?

I knew I had a box with Christmas fabric in it. 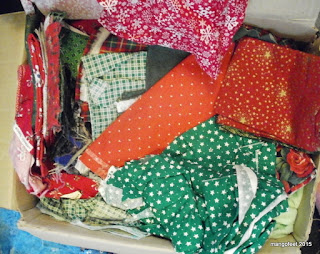 But though there were also some just-red-and-green fabrics mixed in with the clearly holly jolly stuff, it turned out not to be all quilting fabric.  There were some odds and ends of fluffy fleece, a set of fairy wings from back in my dollmaking days (no sign of the fairy), and a mystery project. 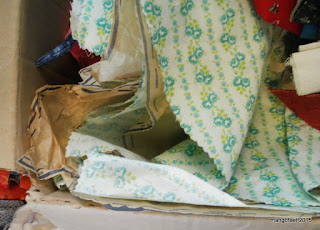 This is fabric pinned to the tissue paper of a commercial pattern and cut out.  The pieces are labeled 'side' and 'front' with no indication of what they're supposed to be.  So, when I got home I checked with my friend google and located the pattern: From the size and shape of the pieces, I'm guessing it's the one pictured at middle right (mixer cover?)  I have no idea where this came from - not my colors and I've never yearned for a mixer cover.  My guess is that someone gave me this unfinished project sometime in the last couple of decades.  (Because when you sew, people give you odd chunks of fabric.  It's a thing.)  It looks like I can just cut it up for scraps, so I will!

Since I now had more reds and greens to play with (not as many as I'd hoped, but still)  I made some more dark Ohio stars for RSC. 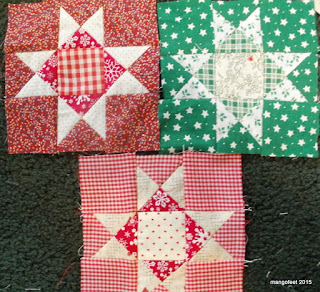 And I continued playing with Snail's Trails.  I found some fabulous ones here the other night, along with a wonderful tutorial here.    The tutorial makes a bigger block than I'm working with, and starts with a large square of fabric.  But since I tend to work with small strips and bits and scraps and orts, the way I'm doing them is different.  But inspired by her lovely Snails, I made some with four colors per block. 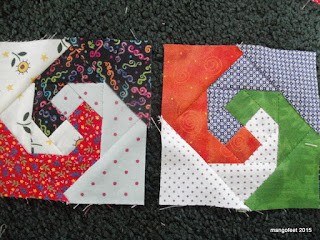 And remember the other day when I counted the Silly Monkeys and came up with 24?  I didn't pick them up after the counting. 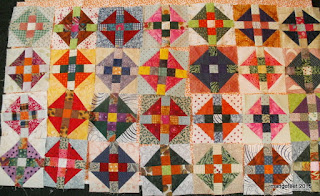 I think they're getting sneakier.


Linking to Oh, Scrap!   Because Quilting is More Fun Than Housework...

Especially love the use of checks and plaids in the Ohio Stars!

You always inspire me! Thanks for linking up with Oh Scrap!

Love the moniker Silly Monkeys. May have to steal that someday. ;- )

good looking collection of blocks there! But that mixer cover is too funny, LOL!

Yeah, that's definitely 7x4=28 silly monkeys. They multiply when you are not looking.

I have a bunch of things pinned to pattern pieces too. Some are mine...some my daughter brings me from garage sales. I'm not sure what she thinks I'm supposed to do with things like that. She doesn't sew and thinks just because I do I can use free stuff like that. Now you know where some of my scraps come from!

those are cheery! I haven't touched my quilt since my back went - have to get back to it.

I clicked over to the Snail Trails link. They remind me of Hokusai's 36 Views of Fuji -- google it and you will see what I mean.

you are busy girl! No grass bending this week??

Your monkey blocks are looking wonderful.:)