With the end of the month approaching, and a new color about to be declared, I decided to lay out the rainbow blocks I've gotten done so far to see how they look. 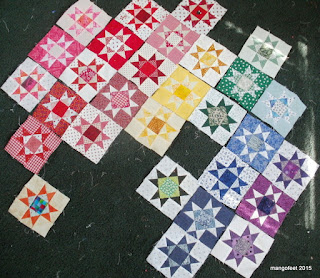 What I'm thinking of doing is setting them on point, alternating dark background blocks with light background ones, and running them in ROYGBIV sequence from upper left to lower right.  Clearly, I need more of the cool colors, and a bunch of yellow, to say the least.  (I got so excited finding more reds in the xmas fabric that I made several more blocks.  I now have a ton of red ones and need to bring up the other colors' totals to balance things out.)

And speaking of red and laying out blocks, I laid out the Silly Monkeys, testing a red background. 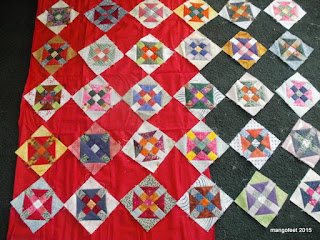 (Don't count the monkeys.  It only encourages them.) 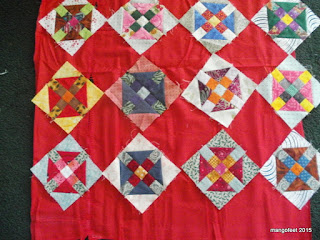 And here's monkeys on green, down at the other end.  (Pretend it's not just the carpet...) 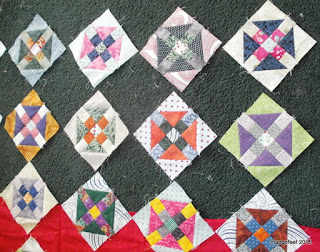 I'm also going to see what they look like with sashing, but that'll be for another day.  It was hard enough catching them to get one layout done.

And those piles of four-patches continue to grow.  I'm making a conscious effort not to count them.  I want to just keep making them until I magically have enough to make a quilt.  I know that I have somewhere between 17 and 3000 at the moment, and I'm satisfied with that range. 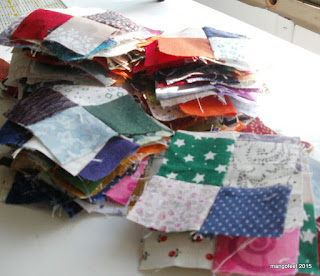 And remember my whining about crawling around on the floor, basting Katie's Star Patch in 90+ degree temperatures?
It wasn't until I was right in the middle of an email replying to a commenter, discussing tables, when I realized... 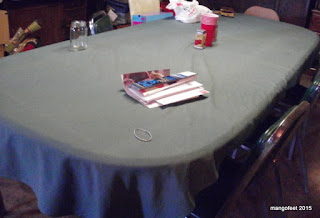 Yeah.  That's the big dining room table right here at home.  (We only use if for company, so its existence had fallen right out of my brain.)  All I would have had to do is bundle up the quilt sandwich and bring it home with me.  Added bonus is, since the house is earth-sheltered, it's nice and cool in here, no matter how hot it gets outside.

I believe the expression is "Doh..."


.
Since it's red's last gasp, I'm linking to So Scrappy for the Rainbow Scrap Challenge.  Come see all the gorgeousness!
Posted by gayle at 7:54 PM

I think the dark green shows off the monkeys better; the red tries to overshadow them. Of course you might not want them to show off.

My architect husband was so intrigued with earth-sheltered houses in the early 80s. We even bought a south-facing lot at one point, but life moved on and we sold the lot. Now he's designing an accessible disaster-proof house for our golden years. Oh, I agree with knitnkwilt about the green, but you'll come up with something exciting, I know.

Wow! So many stars done already. You are fast and they are wonderful to boot. I am surprise the monkeys behaved long enough for a family picture lol. I too think the red is too excitable but I'll to see it with sashing before I say anything else. Great job so far.

Go reds! And I have table envy.

Red makes a fabulous background for the monkey blocks. Just too cute. Loving the rainbow layout too.

red for the monkeys please. And impressed that you can see the top of your dining room table. wow

I love the rainbow blocks alternating light and dark backgrounds. What a great idea!

Those little monkeys on red make such a happy quilt. Wow - you sure went to town on those four patches - a great leader ender project and a super way to get rid of the little bits. Love the alternating light - dark layout for your rainbow quilt. The dining room table sounds like the perfect place to prep that quilt top!

I love all those blocks. You have some really good ideas about setting them!

At least you tamed those naughty monkeys to stay still enough for you to photograph. LOL They look great on the red.

I vote for monkeys on red, FWIW. I think they look fabulous that way. It shows off their silliness better. ;- )