And then one thing led to another

We all knew that purple kitty print was going to make a handsome cake stand, right? 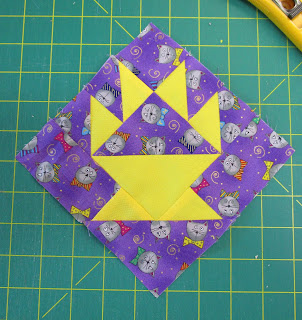 Right.
And then, because one thing leads to another and because we've already done both lime and orange for the RSC this year and because I do like to play catch-up 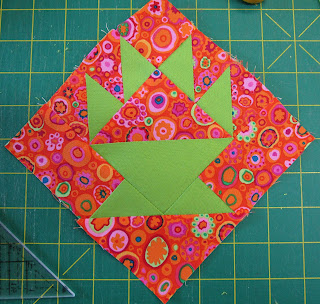 I made another.  And then, since I found the pink one that had mysteriously disappeared, I decided I needed a group shot. 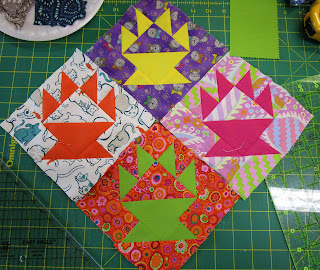 You know, a group shot of the blocks that I'm going to be making for NEXT YEAR'S  RSC.  Which I obviously haven't started yet.
(I found the missing pink one when I decided to get a bin to put the kitty block into so it wouldn't get lost like the pink one.  I spied one on top of a stack of bins full of blocks.  Guess what was already in it?)  (Apparently I'd had that idea before, but then it fell right out of my brain) (This time I remembered to label the bin)
And since this is the last Saturday for our July dark blue RSC blocks, I made another postage stamp for PSP20. 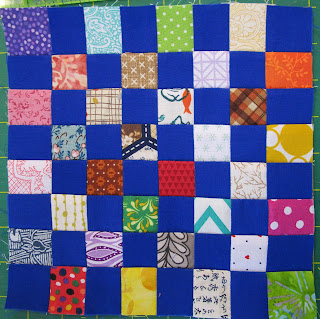 Lately it seems like my world is just full of these little 1.5" squares.  Between the postage stamps, the 4-patches I'm making for Sand Castles 2, the squares for Bonnie Hunter's Easy Peasy leader/ender project, 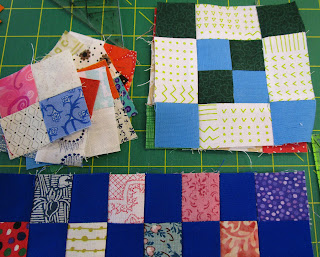 and the nine-patches I'm making for my Jack's Chain, 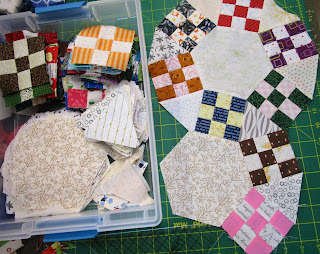 it seems I'm all about the itty bitties.
Linking with SoScrappy for ScrapHappy Saturday and with Quilting is more fun than Housework for Oh Scrap!  Come join in the scrappy magic!
Posted by gayle at 7:49 PM

You have all kinds of fun things going on there, Gayle! I like all your itty bitties!

And again, you have lots of tempting itty bits & pieces happening! Those 'cake stand' blocks are looking gorgeous!

Those cake stand blocks are going to be fun - when you start them, that is. I’ve been exposed to the postage stamp blocks and wouldn’t be surprised if I come down with PSP soon as well.

The cake stands are lovely. I want to make a cake stand quilt someday but haven't been squirreled yet. Yesterday I decided to piece 1 easy breezy block using Bonnie H 6" finished pattern. I have 15 pieced so far, in blues of course! I should be working at machine quilting today but it's not my favorite thing to do and more easy breezy blocks are calling. I refuse to feel guilty about it!

I love all your itty-bitties, but those cake stands -- oh, be still My Heart!

Your Cake Stands are just lovely--neat color twosomes!!
And I really like the Postage Stamp block--nice works
hugs from afar julierose

Well, you've been busy. Sand Castle 2? I'm surprised no one has pointed out that the top block on the BH Easy/Peasy/Breezy leader and ender pile needs some surgery. But you've probably already fixed it. Good thing the cake stand blocks that you're not making have found a home.
Pat

LOVE the Cake Stand blocks - the combo of bright solids and bright fabrics is wonderful!

I'm not a huge fan of MAKING Cake Stand blocks, but those are SEW cute, Gayle!!! I can totally see why you are "not" starting this project. :o))

Great plan for your "next year's" RSC project (I can't say much as I do the same thing). FUN post - thank you!

Wait, when did you start Jack's chain? I really want to give that a go, with sunny yellows & oranges.
A78mandel at yahoo dot com

Hey, I've been going through old "idea" files today and came across a bunch of different cake stand designs. Are you open to adding variety to your blocks?

Ah yeah! Little itty bitties are more addictive than a Popsicle to a kangaroo! Love your progress this week. Happy you did located the pink cake stand. Too beautiful not to be included in the quilt ... when you will start the quilt I mean. :^D
Jack's Chain will be a fun quilt too. Looking forward to more. Enjoy! ;^)

You and Sally have convinced me I need to start a postage stamp RSC quilt. Love the cake stand blocks too. Thanks for sharing with Oh Scrap!

Purple and yellow, green and red - love how these colours play together. Nice planning for next year!

Funny, I have not started projects too.....how in the world does that happen? I do really like your cake stand blocks using the solid fabrics. Hmmmmm.....

I have told you that you are totally crazy... right? Right. Good. Just want to make sure its out there.
Now I'll sit back in awe!

It's just wonderful how one thing leads to another! Kind of like it was meant to be (or not to be. That is the question).

We must be on kind of the same wavelength. I was just looking at my Jack's Chain the other day to see how much I have left to do.

The solids really make the cake stands stand out. Lovely.

What a happy bunch of blocks! Great progress!