Of postage and cake

With a new month comes a new color for the RSC - darker blues this time around.
I got right to work on my postage stamp block. 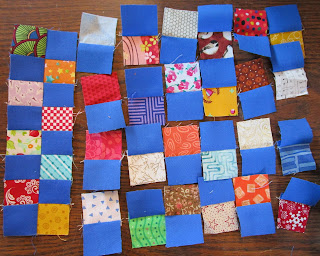 All the while, that imaginary cake stand block was sitting nearby. 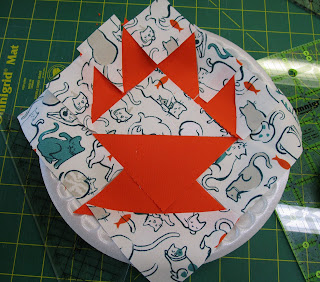 "You know," I said to myself, "if I were a smart woman, I would tuck all those little pieces into a little plastic bag and have a kit ready to go next year when I actually start making blocks for this RSC2021 project."
But then...
"But hey, it wouldn't do any harm to just sew those little HSTs together before I do that." 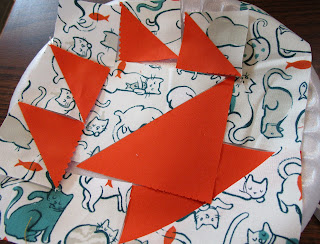 And despite the fact that I was diligently sewing together little squares for the Projects I'm Actually Working On, I decided that I might as well sew that bigger HST together too, while I was at it.  You know, before putting all those parts away. 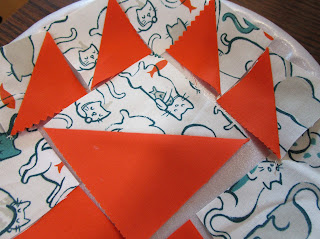 And then maybe just sew those little pairs of triangles together so I wouldn't get them confused later when I would take the kit out of its bag and do the real assembly.  You know, next year. 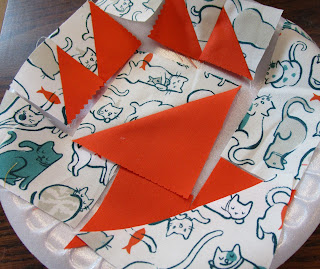 At this point things get a little hazy.  I'm almost certain that cobbler's elves were involved, because the next time I looked I saw this: 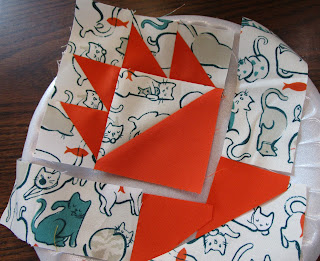 I started muttering to myself.  "Squares.  Sewing squares.  Just squares."
And it seems to have worked because I finally had this together. 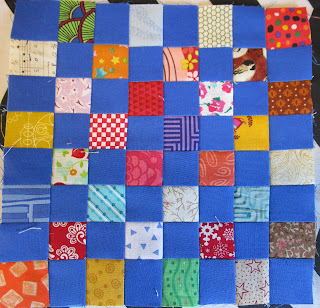 Though that doesn't explain this: 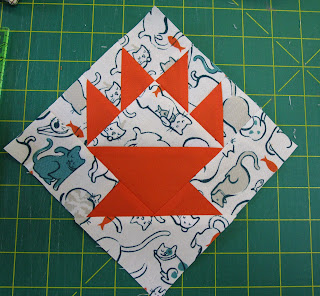 But maybe it's just as well that I made this second sample block, because I can't find the first one I made.  I know I joked about hiding it from myself, just for my own protection, but apparently I did just that.
Or maybe those cobbler's elves took it...
Linking with SoScrappy for ScrapHappy Saturday and with Quilting is more fun than Housework for Oh Scrap.  Come enjoy the blues!
Posted by gayle at 3:12 PM

I do think there are elves in your sewing room, Gayle! You might as well put them to work! For the postage stamp block, are you sewing the squares in pairs, and then into columns? (Not that I want to make one or anything...:)

ROFL!! Hmm... I wonder how THAT happened? Lucky thing you're NOT staring a new project for the 2020 RSC (all while managing to finish your Dark BLUE Postage block, Gayle!)

You are SO funny!

Do you think those elves might be related to the squirrel who lives at your place? Regardless of whose paws are behind the work, the postage stamp and the cake stand (best background!) blocks are awesome.

I blame nargles for all my lost things

OMG just love the kitty bkgrd - so would have had to make that cakestand just because of that. And you and Sally are evil - I just have to tackle those ps blocks with the solids.

I always like to make a practice block before I jump into a project. You've done that now you're ready to go whenever to start the 'new' project. Maybe you need to make more than one practice block and make sure it looks good in other colors. Happy stitching!

I love your postage stamp blocks, and it makes perfect sense to get that cake stand block put together so you don't lose any of the pieces. Watch out for those sneaky elves!

Love your "tester" cake stand block. Sad to hear you lost its twin. Look for a ransom note from the elves. They usually don't ask for much, you know, things like cookies or berries. I'm sure it will resurface somewhere. Love the postage stamp block. Enjoy! ;^)

I’m agreeing with making the block so as not to lose pieces!! That’s my story and I’m sticking to it! The background fabric is “to die for”!

You had me at postage and cakes. I think it is a good idea to make a whole block before putting it away. I know if I put away parts and pieces I would have no idea what they were for when I did find the package years later. Both are lovely blocks.

You are so funny! Although... my husband swears there's a six foot tall man who comes into the house to hide his socks and steal the important things he's looking for. So I guess elves are not out of the realm of possibility!

Postage stamps and cake stand blocks in the same post - you are killing me Gayle!

Thanks (?) for sharing with Oh Scrap!

OMG! I am dying over here, this is too funny! Hope you find the one you hid.

Now that it is done, pin it up somewhere next to December on your calendar, and keep it there for reference.

Cute story, cute blocks. Cake Stand has such an updated vintage feel that I can't wait to see more. Have fun with both.

Sometimes they just call your name and you can't resist. Very fun blocks!

:: catching up on blogs very belatedly:

I would really like to knit some squares onto my sock yarn blanket... if I could find it.