Okay, I give up. I"m making Cake Stands for this year's RSC.

This is actually a purple cake stand, but my camera struggles with purples so I admit it looks kind of pink. 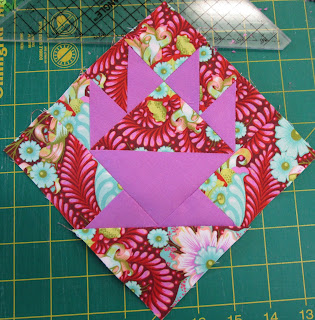 I was really glad when Angela announced a new color for RSC, both because purple is my second most favorite color to play with and because it gave me something to actually show for all the stitching I've been doing lately.

It's not that I haven't kept busy.  Here you can see my nine-patches-in-progress in the upper left corner, with the postage stamp squares cut for PSP20 for August, light green for January, and yellow for whenever it might turn up on the calendar.  At upper right is a couple of platefuls of Easy Peasy leader/enders, with my four-patches-in-progress all across the bottom of the picture. 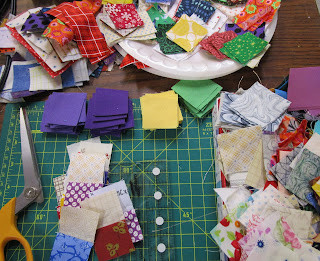 And I pulled out the Demented bits and have been diligently getting more demented by the day, 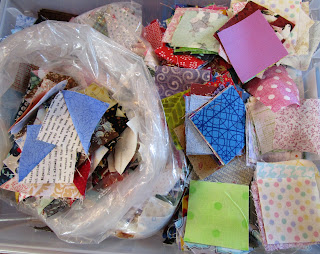 but it doesn't leave much to look at.  The pile of half-blocks on the left is growing higher, but one picture pretty much looks like another. 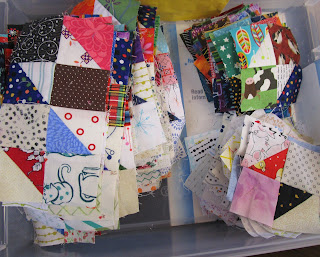 Four-patches for Sand Castles 2 are appearing, too.  Normally I have tons of these on hand for assorted projects, but the first Sand Castles quilt used up a metric butt-ton of them.  (Well, only 512 of them, but that's pretty close.)  But you know, you've seen one four-patch, you've seen them all... 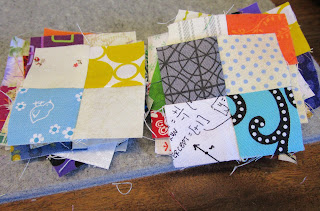 The Easy Peasies are drifting in, too.  But again, not very impressive as a way to show progress. 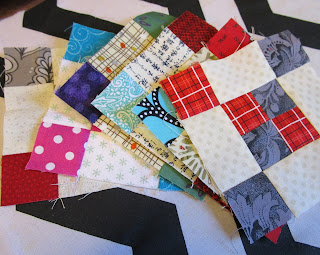 Though here we go. 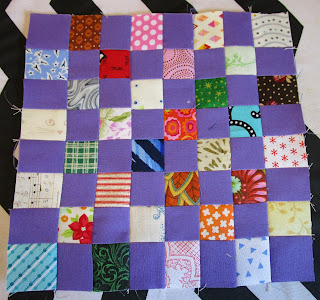 
Linking with SoScrappy for ScrapHappy Saturday (I'm late again!) and with Quilting is more fun than Housework for Oh Scrap!  Come see what all the scrappy folk have been up to!

(And a New Blogger update - I thought I'd finally figured out and gotten settled in with New Blogger, but tonight it wouldn't let me create a new post.  I've had to revert to Old Blogger in order to post all this.  No idea what the problem is, but I sure wish they'd get their act together.)
Posted by gayle at 7:52 PM

And so ends the great Cake Stand denial. :P

You've got photos full of happy, scrappy bits there, Gayle! Anything made with them is going to be good. Check and see if you have a New Post button in the upper left(ish) corner. For some reason, "they" switched it just in the last few days. I think it had been a plus sign in the lower right corner. And just when we all were starting to figure things out, it moved! 🙄

Oh wow, you’ve been busy with all those four patches! I love all your projects. I keep intending to catch PSP20, but... so many squirrels! Your Blogger problems are certainly relate-able by most of us. They keep dumping my email address for comments (yet again this week - it’s been happening about every other week for 2 months). And I notice that the icons keep shuffling around. what a cluster-foxtrot!

One of these days, I'm going to have to join one of the RSCs.

I might as well put cake stand blocks on my list too. We all know it will eventually happen :)

Thanks for sharing with Oh Scrap!

OK, you admit it, cake stand is an official project. Now be truthful, what new squirrel did you just make 1 block of? It's ok, you can tell me, I won't tell anyone else. I mean I'm the person who made just 1 easy breezy block and ended up with 30 something in 2 days. Happy stitching!

The new Blogger changed their button for adding a new post - the big red plus sign at the lower right is gone and there is a NEW POST button in the top left hand corner. And I have to get to my Design page a whole different way than before - hoping that is a temporary glitch. They're just trying to keep our brain cells alert I guess. LOVING all your scrappy works in progress. When they come together, what a WOW it will be!

Loving your purple postage--I am so tempted to begin making these...I am a big fan of postage quilts...was in a swap a few years ago and make THREE big ones...S I G H ..
Anyway--your cake stands are gorgeous.
hugs from the sauna that is SE CT today ;000 Julierose

Lots of scrappy goodness at your house! My "Partially Demented" (I'm making bigger blocks) has been languishing for months. When I got it out recently I see that I have finished one whole quarter. It moved quickly when I was using it as L/Es; guess I should move it back to the sewing table. Yes, Blogger has been frustrating, but I have found most of their recent changes make it a little less cumbersome. Still, changes without notification is frustrating.

I'm so glad I never started blogging as all of the problems people have been experiencing would make me quit anyway. I'll stick to Instagram, at least until they start messing with that, too. Wouldn't you think they would have done a lot more beta testing? I'm glad cake stand has come out of the shadows to be properly acknowledged.
Pat

*sigh of relief* Admitting we did something is the first step to recovery. Now that the cake stand is officially out of the closet, you can enjoy it to your heart's content. Doesn't that feel good?
You did a lot of work, all in preparation to make beautiful quilts. Wonderful progress on many fronts. Enjoy! ;^)
P.S. So, which block have you tested for a not-starting-another-project quilt? :^D

Your cake stands always draw me in. Each one I see is my new favorite. Have fun. Thanks for sharing.

Okay, you’re admitting to something we already knew (cake stands) and then drag out Demented bits and we can only conclude that you started another new quilt. I’m guessing quarter inch hexies...