How did it get to be Sunday already?!?

I could have sworn that yesterday was Second Monday, and the day before that was Warbleday, but I'm being assured that today is indeed Sunday.

Seems like I've got a photo or two of what I've been up to this week.

I've got a heart of cake stands, 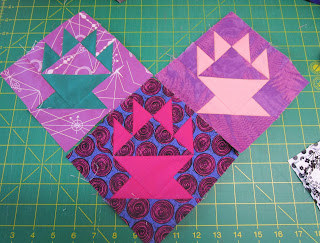 and a handful of chips. 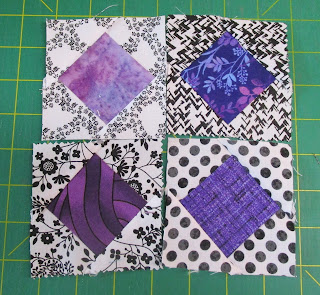 And two more Antique Tiles have joined the party. 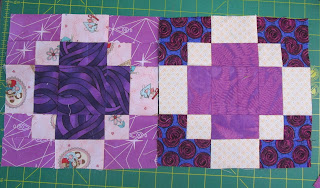 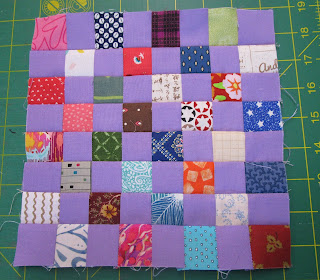 I counted up my Hawk's Nest blocks (which I type as Hawk's Next every. single. time. and have to go back and correct), thinking I had 10 or 11 done. It turns out I'd just finished number 20, so I'd better get moving and clear that design wall.  Which means it's border audition time for my Jacks top.
I pulled out some likely candidates - two different stripes and a couple of batiks - and pinned them up. 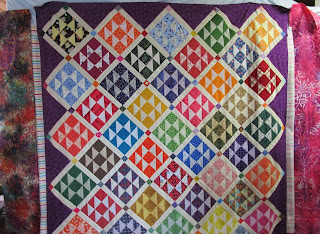 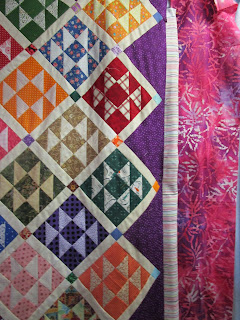 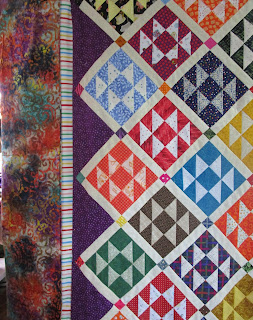 I really like the second batik (the one on the left), but sadly I've only got one yard and it won't be enough.  I'll keep scrumbling and maybe an idea will pop out at me.  In the meantime, I'll start making the alterate blocks for Hawk's Nest (nest not next. nest nest nest) (dammit) so I'll be ready when Jacks flies off the wall.
Linking with SoScrappy for ScrapHappy Saturday and with Quilting is more fun than Housework for Oh Scrap!  Come join the fun!
Posted by gayle at 4:53 PM

According to my time management system, you’re posting every ten minutes on average now. I approve. And congratulate your team on their productivity.

That's what happens when you're having fun; time flies! Boring people don't have this problem. WhooHoo for purple cake stands. You have such yummy purples in your chips. Looking forward to seeing what those will become. I love the fabric used for the center of the Antique Tile on the left. Wow! Looks like Jack has grown too big for the wall. I prefer the border combo on the right. I find the one on the left demands too much attention. But that's just me. Enjoy another productive week. ;^)

Jacks is (are) one of my favorite blocks. I agree with the batik on the left, but may be leaning toward the stripe on the right ...

So many colorful projects! I actually like the pink batik on the right side of your Jacks top. What size are your chip blocks? I think that would be a great way for me to use some of my scraps.

Love your purples, especially the PSP block! And look at the Jacks quilt - that's a great design! Border decisions are always hard for me, too. It's going to be a beautiful quilt no matter what you choose!

Love the pink border on the right 🥰

I agree, I like the second batik best, but that pink one is a pretty good second prize.

Pretty PURPLE scrappy blocks! Best of luck with the border selection for the Jacks quilt. No matter the day, it's always a pleasure to hear from you, Gayle!!

Purples make me so happy - why they're one of my top three favorite colors. Your chips look great!

So many lovely blocks. I always like prints but your solids are charming.

When I love a fabric and there isn't enough of it, that is when I get creative. Have you thought of piecing the border. Perhaps adding blocks in the corner and even in the middle of each border, if more "fabric" is needed?