Nothing like the day after a quilt festival to leave you all inspired, but pulled in too many directions at once.  I finally just cut fabric for a while to let myself think...
I've been watching the Stars in a Time Warp series since the beginning, but I don't have much in the way of Civil War reproductions, so was unable to play along.  But sawtooth stars are one of my favorite blocks (okay, okay, I admit I have a lot of favorite blocks...), so I decided to just make a few with fabrics I do have and like. 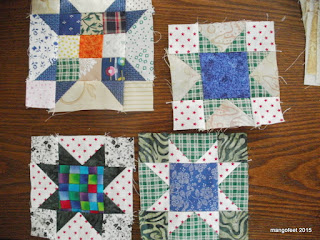 There, one itch scratched.

Another Sister's Choice block also got made, because someday I want to make a Sister's Choice quilt.  But every time I try making a block, I seem to say "Yeah, someday.  But not this day."  And the block gets added to the orphan pile.

Pay no attention to the monkeys.  Apparently I left the window open again. 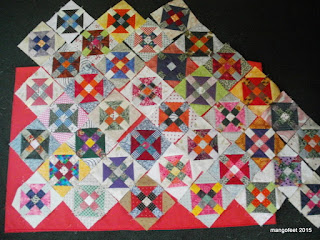 In my last post, I showed a picture of an applique quilt that got me all excited about applique, and gave a link to the pattern I bought.  Since I couldn't seem to light on anything, I started pulling some scraps to play with.
I didn't want to put a huge effort into this since it's basically just a test block.  If I hate it, I can drop the whole project with little investment.
This was the first thing I came up with. 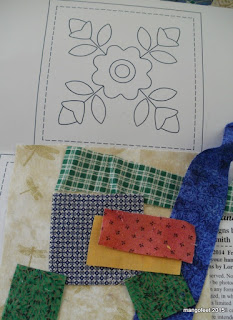 Here, I'll make a mockup to show it better. 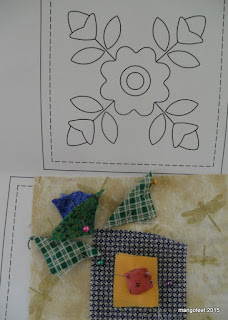 Pretty safe choices.  Not quite the bang I'm looking for. 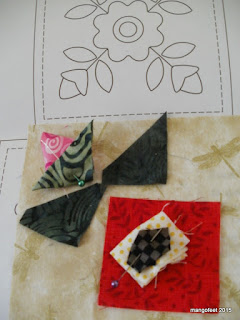 That's a little more fun.  (That's that red that photographs as orange-red.  I've had trouble with it before.) 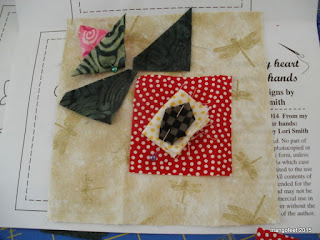 Or maybe I'll just pull all batiks...
Which do you think is the most me?


Linking to Oh, Scrap, because it's Sunday and that's where the fun is!

If you need inspiration for designs, google "jacobean patterns". That's the first thing I thought of when I saw your sample.

Gotta be careful! That applique is going to suck you in and make a convert out of you.:)

I've been a spectator to Stars in a Time Warp too. I enjoy the various history lessons even though I maybe have only two pieces of reproduction fabrics. For your applique, I like the brighter red.

I love that upper left star in blue. I need to make a quilt from that star someday. I am always happy to see what you share with Oh Scrap!

I don't know what you want to use, but hand applique takes lots of touching, and close looking so pick something that makes you happy every time you touch it. Machine applique is fast.
I love lots of pattern in piece o cake designs. Whimsical and fun and not traditional.
What do you like Gayle??
LeeAnna

I love the look of applique, but I'm definitely not up to trying it yet!
I got back to my quilt finally and got four more squares done. I want to get the main part of the top done soon, because I got a crazy idea to make one for my niece for Christmas (she's six, so it doesn't have to be too big!