I've got more blues than I thought...

I didn't get a lot of sewing done this week, though I did throw together a couple of blocks.  Even though I said last week that I wasn't going to make any more Ohio stars for RSC until the new color was announced, I made one anyway.  Because habit, I guess.  Another black background with multicolors, though this fabric is something that I've had for decades. 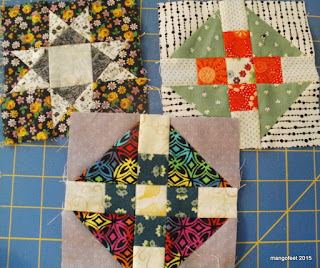 And there were monkeys, of course.  Because there are always monkeys.  I need to count them again at some point, since I've completely lost track.
But my big time sucker consumer was my effort to get a little more organized.  I hauled in a folding bookshelf that I had stored in the garage and started sorting fabric.  These are the ones that I've already cut strips and squares from, in my efforts to have materials ready to go for scrap quilting. 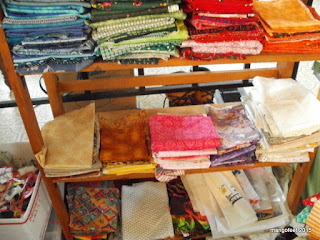 Here are some piled high on a chair that I still have to sample/process.  Some are fat quarters that I picked up on my birthday binge, and some are old fabrics that I've pulled from storage boxes. 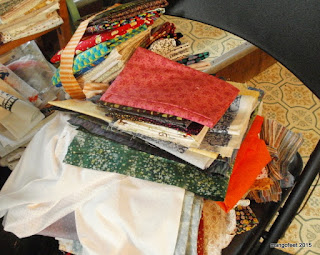 And there's another boxful to go.  And a couple of boxes out in the garage still that contain mostly heavier weight fabrics that I use for bags, though there are probably a few quilting weight cottons mixed in. 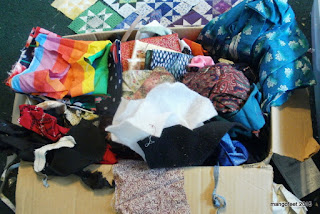 At least the end is in sight.  Organizing has got to be my least favorite thing.  I'm more of a run and fling kind of creator, so this whole fold-it-up-and-put-it-away thing is a real drag...
As a reward for all my hard work (and to keep me from repetitively banging my head on the wall because it was more appealing than organizing), I allowed myself to make a pig block: 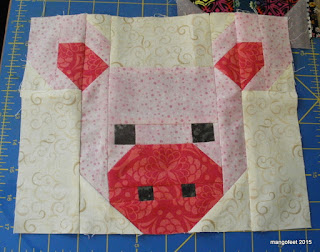 I've got a project in mind (because pigs!) which I'll post about as I go along. 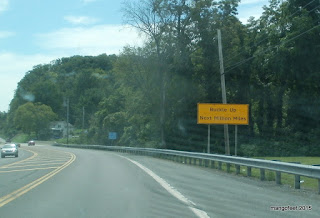 Seen in Pennsylvania, where apparently they have a DOT with a sense of humor.


Linking with Oh Scrap! at Quilting is More Fun than Housework, where the fun never ends.
And since the new color for RSC2015 has been announced (Orange!!  Hurray!!) at So Scrappy, I'll link my last indigo/black block with Angela as well.

Your piggy block made me laugh - what are you up to now! Soon you will be organized and ready to sew. Thanks for sharing your post with Oh Scrap! I ways look forward to seeing what you are up to!

Great road sign! Made me laugh! I guess maybe it is meant to get drivers' attention?! Have a great week!

What a cute pig block. Pretty cool road sign.
I'm working on my sewing area. Yeah. It's a drag. lol.

Always love seeing your OSs and Monkeys. Pigs? TN DOT has a sense of humor, too, tho sometimes it borders on risqué. About every two weeks they put a new message on the Amber Alert signs about the dangers of texting while driving. Wish I could remember the funniest.

SEW glad that you found more blue than you thought. It looks like you are more than ready for some ORANGE scrap quilting. Have FUN!!

Love seeing all your blocks. You will be super pleased with yourself once you get all that fabric sorted, it will enable you to sew more, promise! Love the pig too!!

Yes, that black background fabric does look decades old. Don't you just love that! (I do). Hmmmm, wondering what you will do with PIG. Please do tell soon.

So many fun blocks this week. Because PIG! Way too much fun. Great work on organizing. It can be hard, but on the other hand, it keeps us from getting buried in our own stuff.

ahhhh organizing the fabric... it goes on and on. We can relate...

Pigs! Ack! I still feel the weensy little snout pushing on my hand at the state Fair!
Squeal!
LEeAnna