After a windy, rainy start to the day, we managed to get a lot done.
Since I couldn't do much outside in the rain, I declared it a baking morning. Chocolate chocolate-chunk cookies, first.
And then - I blame Norma for this: 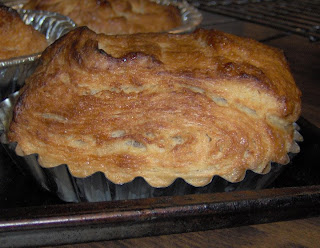 I saw the pastry on her blog. Had to google it. All the recipes are the same, almost word for word, from the 1 3/4 cup mineral water to the Fleur de Sel. (I therefore suspect a single source for the recipe, with everyone copying it and posting it as their own...)
So I did the Vermont version. Instead of mineral water, I used tap water - we have fine genuine Vermont spring water at our house. And just plain ol' Mortons for the salt. (Fleur de Sel? Not in *my* grocery store...)
I cut the recipe in half, only making 8 of these luscious pastries instead of 15. Enough is enough...
The dough isn't that hard to make (I've made danish pastry dough before) - a bit of fiddling and then a lot of waiting, repeat, and repeat again. And I was doing lots of other things while the dough was doing its chilling/resting - like helping Madman get the plastic on the hoophouse, weeding in one of my flowerbeds, dividing rhubarb, and building a tootsie bucket*, among other things.
Unfortunately, I discovered I only had 4 little tart pans in my cupboard, instead of the 8 I thought I had. So I had to improvise. Three little round pie tins, and one mini-springform pan later, I was good to go. 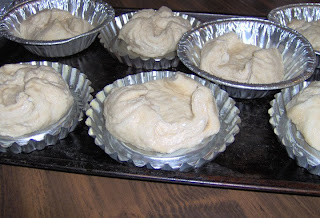 Here they are proofing up. Those corners are supposed to be folded into the center, but they refused to stay in place. I kept pushing them back, and they kept coming unfolded. I finally just gave up and let them go. 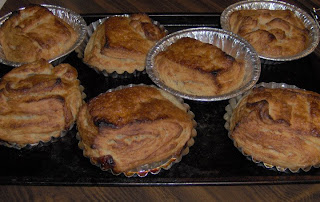 Not as pretty or fancy as the ones Norma had - but damn tasty, nonetheless... This stuff starts at about equal parts dough and butter. Then you start adding sugar. I didn't make When-Harry-Met-Sally noises, but it was damn close...


We got so much accomplished that I'm going to be glad to get back to work tomorrow so I can get some rest.
I don't know why people get so excited about weekends - I've never been so tired in my life...


*tootsie bucket - It's a self-watering container for a tomato plant, made from a 5-gallon pail and some lengths of pvc pipe. That's not its official name. We just call it that because my dad taught me how to set it up, gave me all the bits I needed to do it, and gave me a cherry tomato plant to plant in it - the tomato variety was called "Tootsie." Through the months of April and May that year, we hauled Tootsie out onto the deck every day and back in at night, until the weather was warm enough that she could stay out fulltime. We'd ask each other "Have you taken Tootsie out yet?" or "Has Tootsie been out for her walk?" - like she was a pet... We had cherry tomatoes in June that year. Big Win.
Posted by gayle at 7:42 PM

Wow, I need to work on making pastry, those look marvelous!

I love the named tomato plant, now that the barn is cleaned out (almost) I might be able to overwinter some things in there.

Oh YUM. Don't do this to me. I will hyperenable at NH in revenge.