How can the year be 4378 days long and yet July has swooshed by?

I've been lost in the doldrums most of the summer, it seems.  I'm getting some reading done, but little else to show for my days.  It hasn't helped that today is March 518th, 2020...

A measly bit of sewing got done - here's an Antique Tiles block in dark blues, 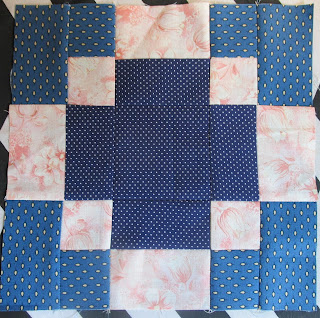 and an assortment of Cake Stands in dark blue and various neutrals. 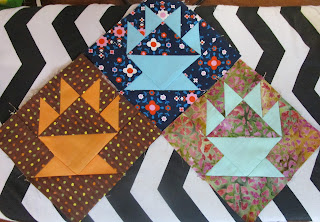 I did a bunch of dark blue sewing back when we were supposed to be doing light and bright blues, so I didn't push too hard this month.
If you would have asked me what quilt I'm currently working on, I would have replied, "My Jack's Chain" but the fact is that I seem to have hit a snag with it.  I got this far earlier in the month - 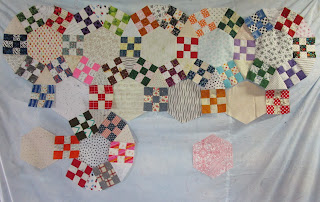 and stuck, because it still looks exactly the same.  I only thought I was working on it. 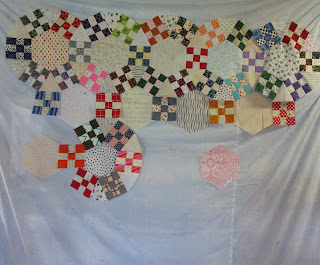 When a project stops moving like this, I've learned to take it as a sign that this is not the quilt I want to work on.  I thought back to the last time I'd been excited about a project and realized it was Flutterby, so I grabbed some leftover flutter-bits and a couple of yards of a really fun batik and made a back for it. 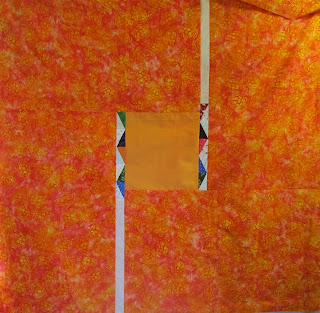 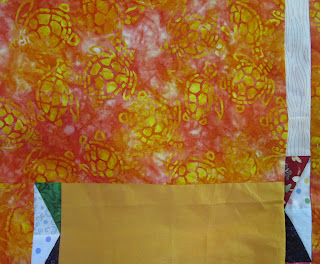 I was having such fun planning the back that I finally had to reign myself in a bit before I ended up making a whole 'nother quilt to put on the back of the first one.  (Not that it would be a bad thing, but I'm really trying to prevent myself from Making Things Harder for Myself, which is a true character flaw)
I'm going to be having a good think about Jack's Chain.  For now I'll continue making 9-patches for it, since you can never have too many 9-patches, and work up a good plan that will let me carry it forward without dragging my feet.
And I think I'm going to baste Flutterby for quilting because that's the one that is making my heart sing right now.  Gotta follow the tune!
Linking with SoScrappy for ScrapHappy Saturday and with Quilting is more fun than Housework for Oh Scrap!  Come see what the last days of July are bringing!
Posted by gayle at 8:06 PM

I am such a fan of yours that I am leaving this comment…although by the time I am done it will already be August…2025. And just in time for me to remember how much I wanted to make a Jack’s chain…in 2019. Oh dear, it’s already rolling into 2026 and I just made another microspool. Buddy sends purrs and cuddles.

Sometimes a bit of sewing is all we can manage! But that back for Flutterby is really great - I think you found the right project for right now!

I do hear you. It does feel like March 518th 2020! All the rain we're getting here isn't helping either. The temp went down to 15Celsius in the evening!!! Where is my summer? And now they tell me it's August! 🙄 Let's get back to sewing. I love your Cake Stand blocks, especially the one on the left but you knew that already. Poor Jack's Chain. Take it down, put it away. Love and interest will rekindle eventually. There's no point in working on something you don't enjoy. It happened to me too. Flutterby's backing is the best. LOVE the turtles! in orange no less!!! Enjoy quilting it. ;^)

Yes, it feels like we are stuck in the movie 'Groundhog's Day". I have things I should be working on, but the heart isn't there yet.

Progress in Dark BLUE for the Rainbow Scrap challenge and creating a back for Flutterby was a good use of your time, Gayle. Here's hoping that your sewjo returns soon!

I'm with you Gayle; I can't settle to anything either. It's just picking things up, and then putting them down again, all day. The only thing is to do something really easy, something I could do blindfold (well, almost) like random half square triangles, or four patches which are sure to come in useful someday, or knitting.
I hope you get your sewing mojo back soon.

You were on my mind yesterday, wondering when we'd hear from you again. I call it start-itis. I can't seem to get enthused about any of my projects for very long. Gave up on my Jack's Chain a long time ago, then I saw two at a show on Friday and now have the itch to start over ... sigh.

Dark blue Antique tile is beautiful.
Sometimes doing something easy is the best we could do. I am with you Gayle, I can't count how many times I pick something up and them put them down.

Good idea to get the back made for Flutterby, since you zoomed right through that one. No sense it letting it linger. I think everyone is feeling a bit of ennui since we thought we were out of the woods, but now the trees are closing in on us again. Keep the faith, but maybe set Jack's Chain aside for now. Surely a new inspiration, or two, will present itself soon.
Pat

I have done exactly zero stitching for weeks and I think I'm starting to go a little crazy. Got to get that studio unpacked

What a great post - languishing is becoming a national headache. As far as Jack's Chains, I might be tempted to reduce to a wall hanging or a table topper of some sort. I've looked at that pattern so many times but know myself well enough to keep saying "oh, no you don't.

Thinking about a quilt counts as working on it in my book. :-)

I didn't get much done in July either. Good for you for working on what makes you happy. I am looking forward to seeing the Flutterby quilted. Thanks for linking up with Oh Scrap!

I've wanted to make Jack's Chine for years but haven't even gotten as far as you. What a pretty back for the flutterby. It doesn't take much to improve our backs if we just take some time.

Jack's Chain will wait... I'm having a few false starts at present, can't seem to get back into sewing like before. Good to get a backing finished, one more process you can tick off.

Enjoyed reading your post Gayle, I had been wondering what had happened to you. I thought you were very brave taking on Jack's Chain, this would be one I could never had worked on, I think you're doing the right thing to step back but at least you have a lovely improv backing.

You are sew right, that you can never have to many 9-patches!