There are gaps in my rainbow...

For the last several years, I bought almost no fabric.  What little I did get was earmarked for my Katie's Star Patch quilt, so it fit within the parameters of what I needed for that.  Generally, I bought lights (I think they're called low volume, nowadays) and brights, preferably non-floral, and no reds.  (The color scheme for the quilt had started fairly narrow, but kept morphing and widening until the final rule was no true reds.)
There are also very few pinks in the quilt.  Neither my daughter (the intended recipient of this work) nor I are pink kind of girls.  When fabric shopping, I've rarely even noticed the pinks.  Not on my radar at all.
And I didn't even realize how far off my radar they are until I stumbled on Soscrappy's Rainbow Scrap Challenge at the end of February.   February's color was pink.  I started checking my boxes of fabric and came up with two pinks, one of which was more of a salmon.
Huh.
Oh, well, I thought.  I don't like pink anyway.  No big deal.  Maybe I'll play in the scrap Challenge next year.
Then sometime in the last month I stumbled across a blog where I saw the most gorgeous pink quilt - pinks, pinks, and more pinks.  And I thought, huh.  I don't like pink, but that's really a great quilt.  Huh.
(And I thought I had bookmarked it or pinned it, but I didn't, so I can't share the link.  I wish I could.  If you've had a gorgeous pink quilt on your blog lately and I commented on it saying something to the effect that 'I wasn't a fan of pink but oh, wow, you've changed my mind', please let me know and I'll add a link.)
So anyway.  I was fabric shopping (quilt batts were on sale for half price, and I figured I might as well pick one up for Garden Party since at the rate I'm going, I'll need it soon) and I grabbed another couple of orange fat quarters, still trying to fill the orange gap in my rainbow.
And when I checked the batiks, I grabbed this one. 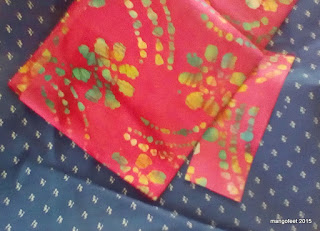 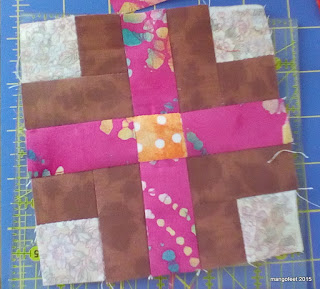 It looks really good with brown.

And I started thinking about some four patches that I'd squared up as an experiment.  I'd set them aside because they were dull dull dull.  Boring. 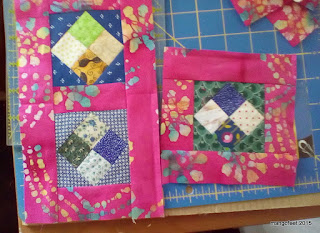 Turned out all they needed was a little pink.
I grabbed some burgundy deco fabric I had on hand, did a little quilting, 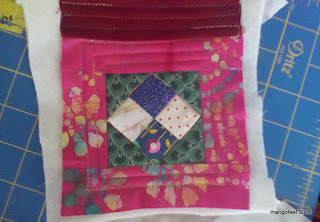 and a little more quilting, 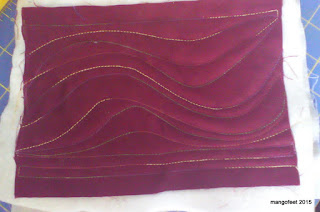 and some more quilting, 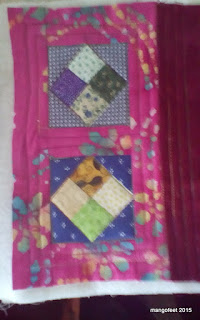 and made myself a bag to carry my Kindle Fire in. Since I'm now using it as my primary camera, I'm toting it around with me, so it needed a little protection.  Not that I'm clumsy or anything.  Just, you know.  In case. 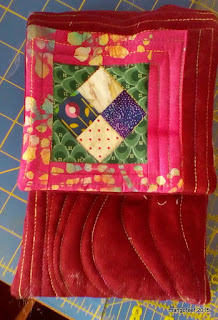 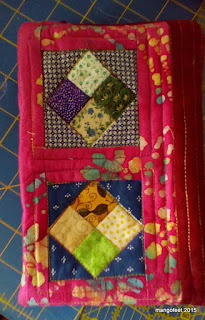 I was hoping using the strip just on one side would look all cool and asymmetrical, but instead it just looks sort of unbalanced and eccentric (not in the good way.)
Oh, well.  It's the prototype.
Oh, and in for a penny, in for a pound?  Check out the lining: 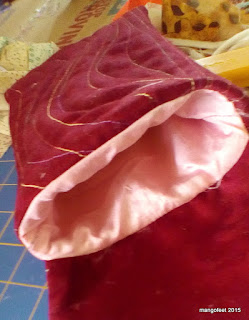 That pink sitting on my cutting table started accumulating scraps on top of it... 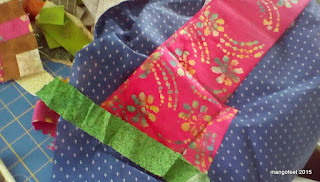 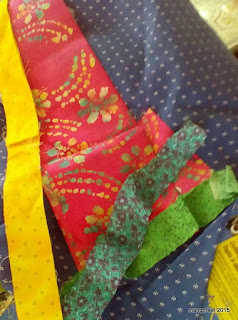 and I discovered that there are a lot of colors that don't look ugly with pink.  Who knew? 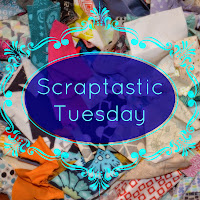 Linking to Scraptastic Tuesday!
Posted by gayle at 9:34 PM

Muwhahaha! Welcome to the dark side! There is no escaping now my pretty! buahahaha!

Glad to see you embracing all the colors of the rainbow. Have tons of fun!

Pink goes well with lots of colours but I don't think I need to tell you that now! Keep experimenting....Thanks for linking up to #scraptastictuesday

I'm the opposite...I have pink fabrics sitting in the stash and I don't know what to do with them (yet)!

hmmm I LIKE pink. I combined it with brown last summer and the top is waiting for quilting. Nice bag, quilting too. LeeAnna

I am Not A Pink Person either (sistah!). But sometimes we need to break out of our comfort zone. You are having fun, right? That's what counts. Fwiw, pink and brown is a combination that speaks to me. If I ever figure out the other color to put with them and, more importantly, finish detangling the skein of pink and the skein of brown that one of the animals had fun with, I will knit something with them.