At last, those quilty pics 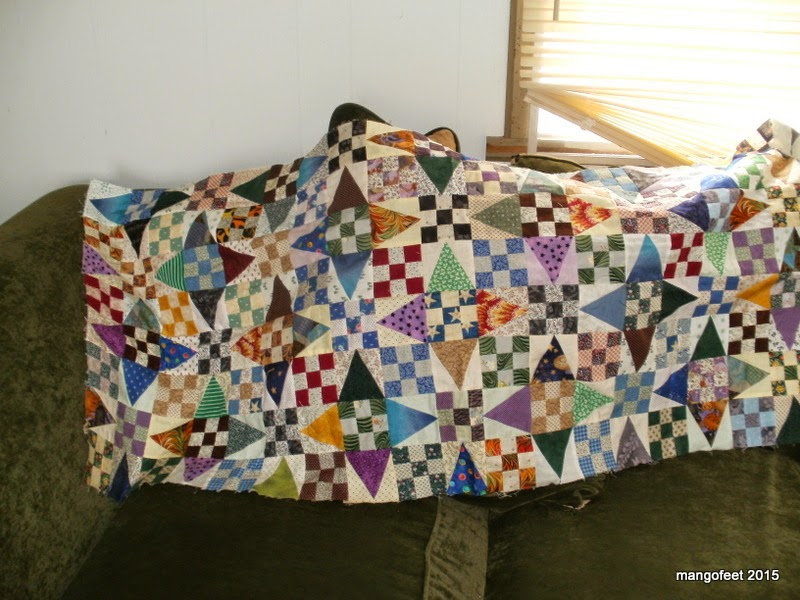 Behold my design
couch.  (I know it looks like there are wild creatures, possibly pumas, under the patchwork, but there are only big cushions.  Really.)  (Also please disregard the whacky crooked mini-blind in the background.  After a certain point, I just get tired of trying to make it be straight. Because okay, fine, be that way.  You understand.)
This is one of those great patterns that look really complex, but are amazingly simple.  There are only two block units: 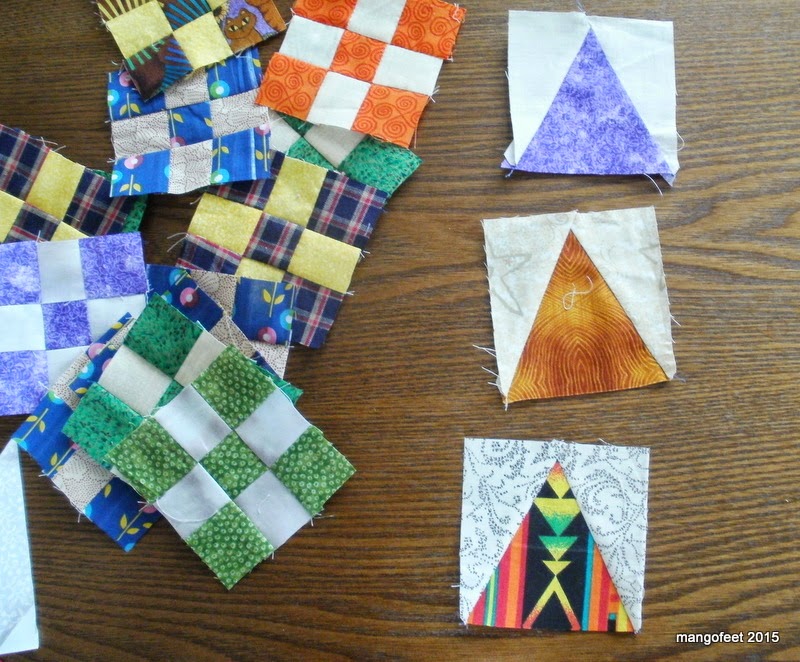 The nine-patches are simple - I could probably do them in my sleep.  The triangle-in-a-square blocks (which I think of as mountains) are harder than they look.
I mentioned in my last post that I had found a new tool to make my piecing easier.  Last time I worked on this quilt, this set of rulers hadn't been invented yet.  Or possibly I just hadn't heard of them.  Whichever,  I'm deeply happy with these things. 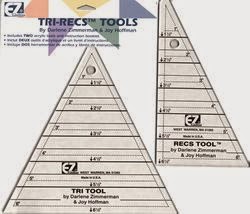 If you google 'tri-recs' you'll see all kinds of tutorials, including some videos.
Previously, I'd had a paper pattern taped to the back of my cutting ruler which I would line up on my 3.5 inch strips of fabric.  I took a picture just before I tore the paper off and threw it away with great whoops of glee: 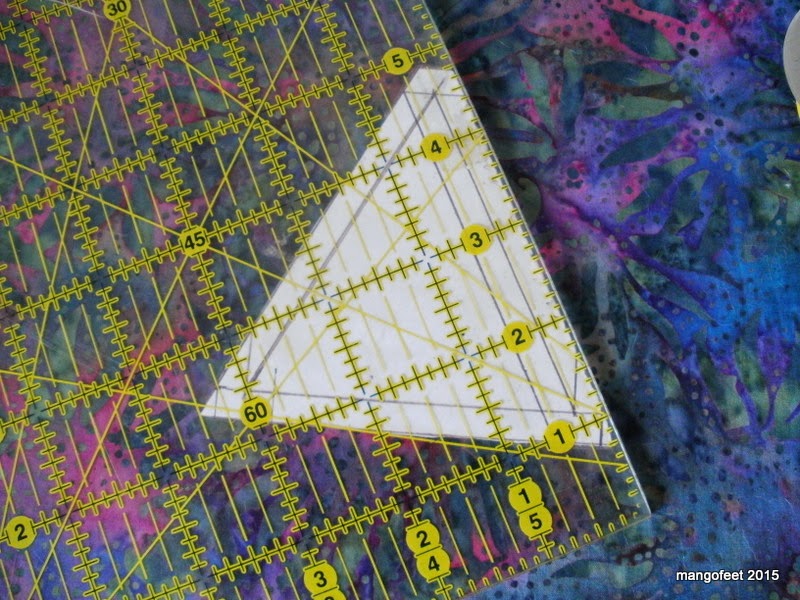 My old way of cutting the side triangles was even worse.  I'd done some math to try to figure out a rectangle to cut in half diagonally to make the triangles.  This was less successful than I could have wished.  After stitching, my block units needed a lot of trimming to reach even 'good enough' status.  This was one of the things that had bogged me down on this quilt.  Nothing like getting kicked in the butt by something that shouldn't be that hard... 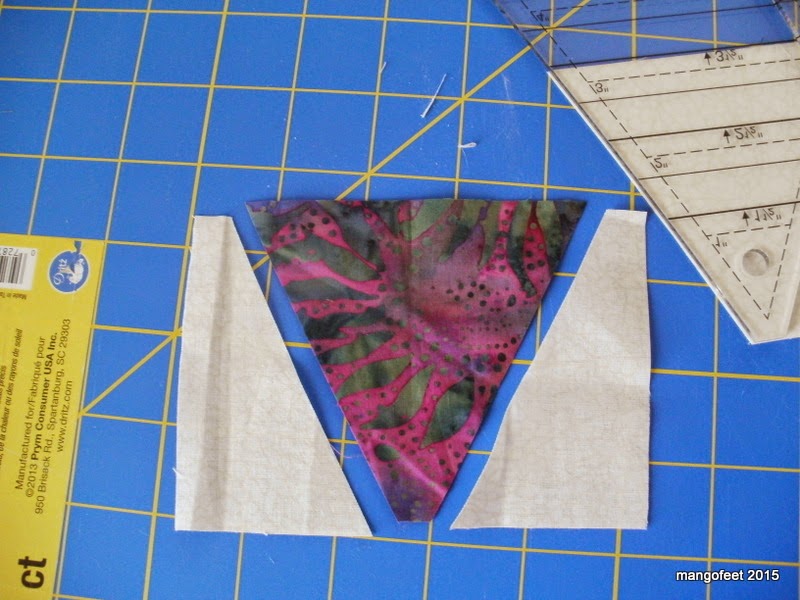 One of the things I saw on a tutorial for using the rulers is that if you position your first triangle next to the edge of the fabric like this: 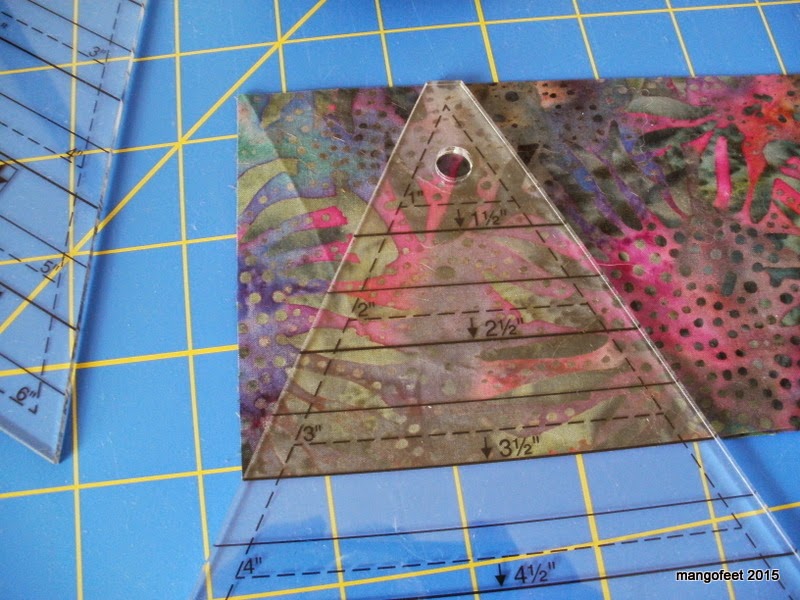 You end up with a wasted triangular piece of fabric. But, if you slide the ruler to the right for that initial cut, leaving enough room to fit one of the side triangles: 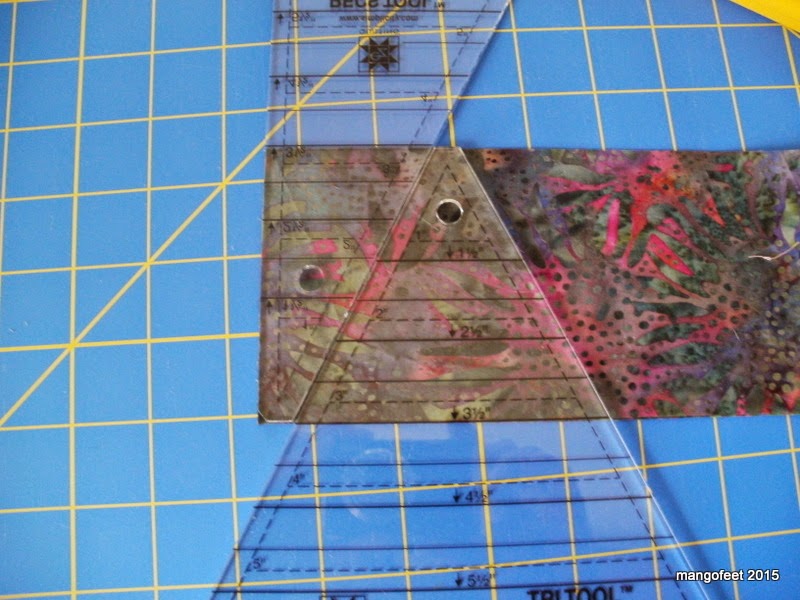 You end up with pieces that are usable for another project.
And if while cutting out the light side triangles, you throw in a couple of big isosceles triangles: 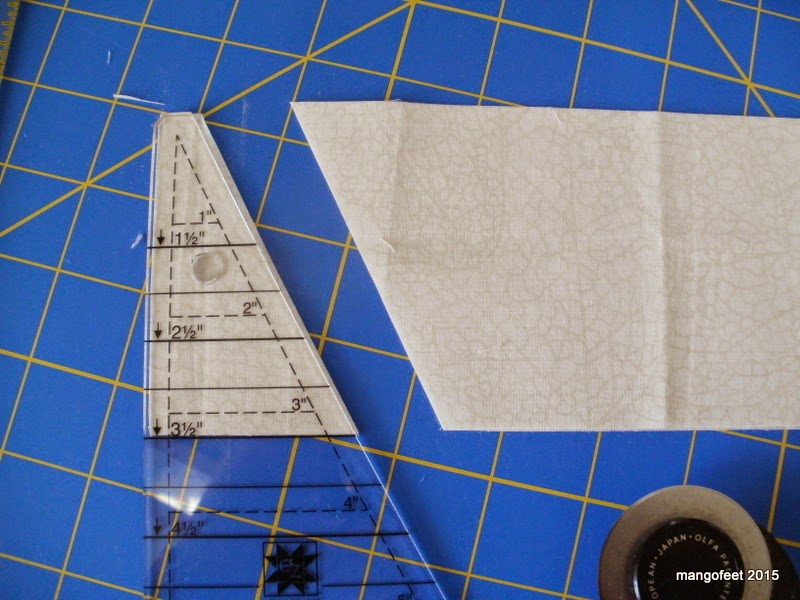 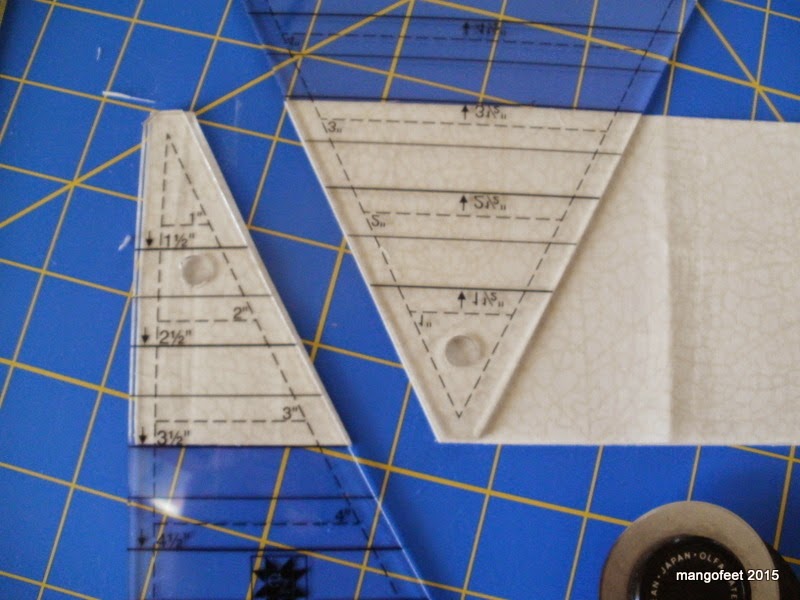 you could end up with some pretty cool blocks for another quilt. 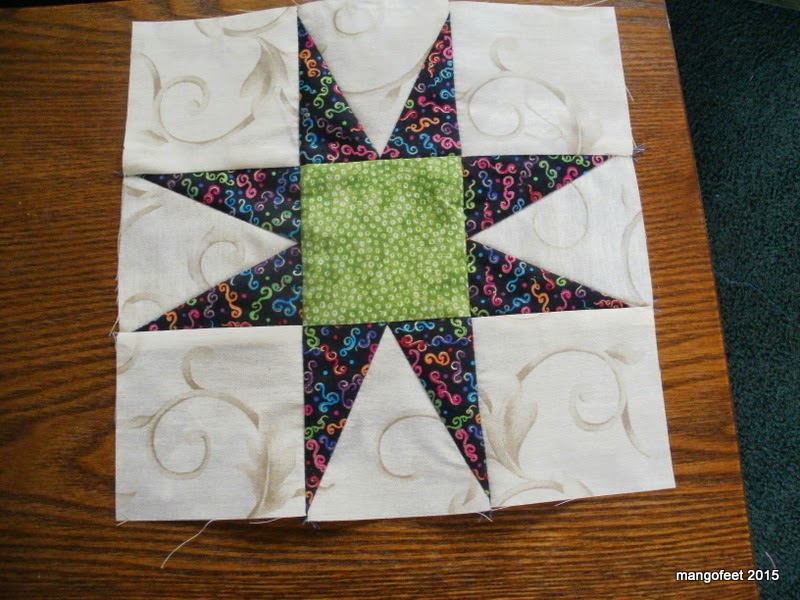 Because you really have to test out the new rulers, right?
And then you could end up on a roll and have a bunch of blocks all done while you're stitching the blocks you're really working on. 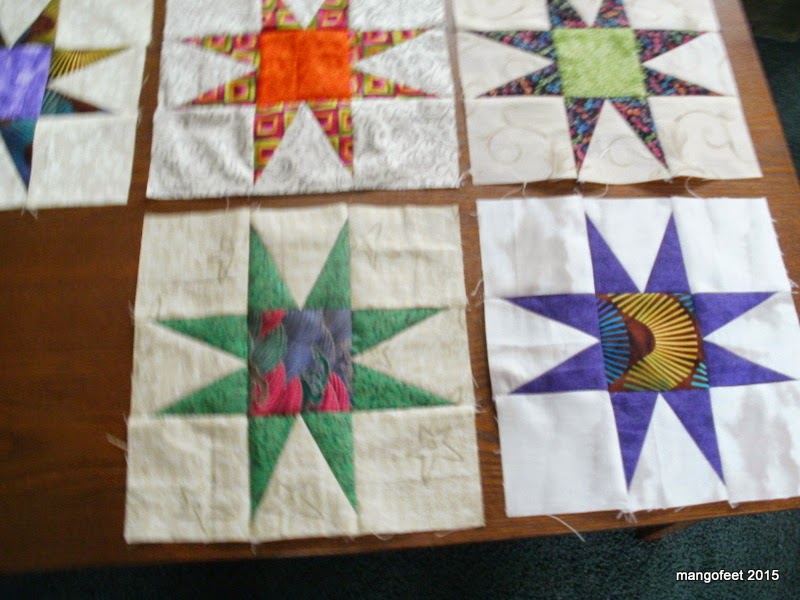 (I'm currently up to twelve of those blocks finished.  The color scheme is roughly green, purple, orange.  Some of the purples pulled in some pinks, some of the greens pulled in some blues, and some of the oranges brought along some yellows, but I'm completely happy with that.  The blocks are amazingly cheery to look at.

And I've got stacks and stacks of nine-patches and mountain blocks done, now.  I think I'm very close to having enough, if my math is right.  (I will check my math.  Because.  I'm very good at math, but that doesn't stop me from being a complete ditz at math.)
The part that's in the photo at the top of the post will be partially dismantled, mostly just separating some of the rows.  I only stitched it together because I was dying to see what it was going to look like.  New fabrics have been added to the project since I started it, and in order to get a good mix of colors, I'll need to make sure the newer blocks are mixed into the older ones. 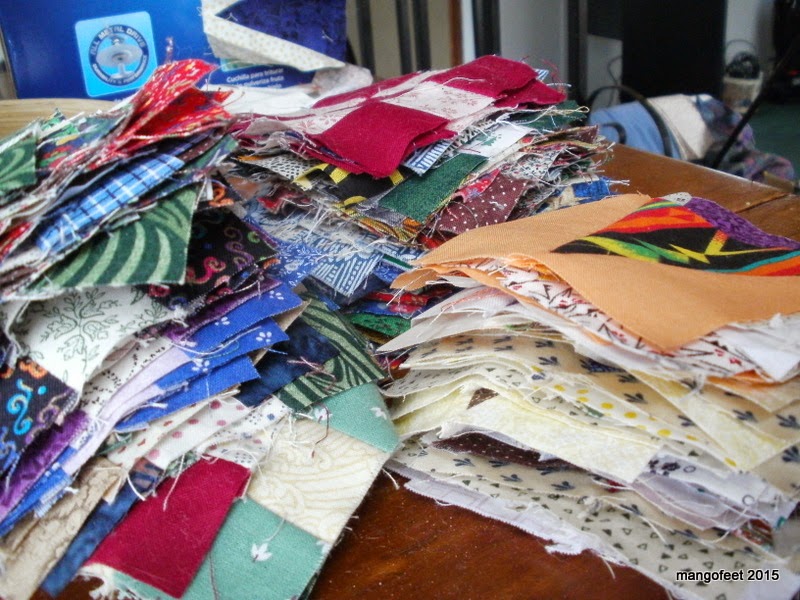 And I've even been making an effort to fold my fabrics neatly after I'm done cutting.  It won't last, but they still look better than what got packed in boxes when I moved. 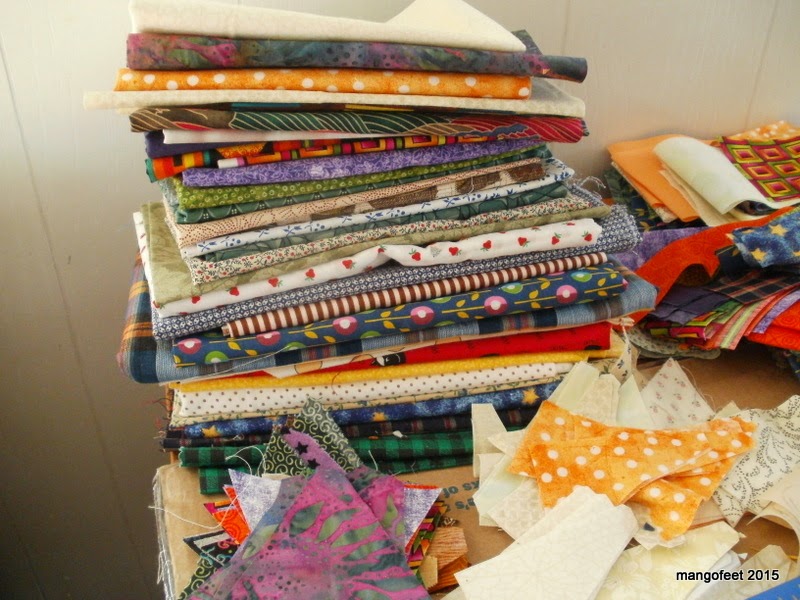 So, yay for scrappy quilts!

Edited to add:  I'm going to actually attempt a quilty link-up thing.  (I'm not convinced it will work, since usually I'm not even able to comment on most of the quilt blogs.)  So here goes nothing:
I'm linking to Oh Scrap! at  Quilting is More Fun Than Housework (because, seriously? Who could resist that name?) (Not to mention the links to many fabulous things that can be found there.) (Did it work?)

I love quilts (my mom has made them for years) I still have the ones she made when I was 12, though they've been loved to rags.
What I don't love it all the cutting! It just bores me to tears!
Yours looks absolutely lovely though!

Your quilts are so beautiful - happy colors! I love my tri recs rulers. Now you' we inspired me to spend time in my sewing room today.

Well your link works so congrats! Love the projects you are working on! Gorgeous!! P.S. Oh my! Did you make my laugh with your blind so I will share with you. I too have a blind with a crooked mind. It's in the bathroom so all my guests can really examine it when they go lol.

Love your quilt, and your entertaining post! I remember the first time I tried to link up with a linky party. I messed it up so much I had to email the blog owner and see if she could fix my mistake. Thank goodness it gets easier when you do it more than once! Thanks, also, for the info about the tri-recs rulers! They look very handy!

Welcome to Oh Scrap! I love your quilt! It has so much scrappy goodness!! I have the tri-tec rulers and haven't had a chance yet to really play around with them but your stars are very inspiring!

Wow! Love where you are going with your quilting! I like the beginnings of that sweater too!

A lovely scrappy finish! And your 'design couch' made me laugh!

Great scrap quilt! Thanks for showing how you use your rulers - I need inspiration to get mine out.

And PS It was the puma that disturbed the blinds ... the puma loves your latest project - just sayin'
Kathy T. in Tampa

Yes, yes! You connected it perfectly so that I could find you, what fun! Love what you're doing with those tri-recs blocks, good job!

That 9-patch/star quilt is gorgeous! And I am not a quilter nor particularly a quilt lover.